Today, and every day, GFWC is grateful for the heroic and selfless work of the world’s healthcare workers. From 1894, when the first Trained Nurses’ Club was formed, to this past month when clubs have come together to sew masks for healthcare professionals, GFWC has a deep history of supporting and nurturing our public health professionals.

During both World Wars, GFWC recruited nurses and raised money for Red Cross efforts. Clubwomen across the country voluntarily turned over their clubhouses to use as training areas for nurses. As evidenced by the articles below, GFWC has also fostered leaders in public health, health care programs that aid local communities, and an invaluable network of volunteers that is determined to help those in need.

The articles below are a small fraction of the contributions of clubwomen to the medical community throughout the past 130 years. We would like to take this opportunity to thank our healthcare workers, our clubwomen that are healthcare workers, and the clubs that are working so hard to support them. We hope these submissions offer a beacon of optimism, and we wish you and your families health and safety during this time.

The Woman’s Club of Upper Mountclair

As we face the growing crisis of COVID-19, the Women’s Club of Upper Montclair (WCUM) of New Jersey, has reflected on their historic support of the nation’s healthcare workers.

By the summer of 1943, there were two groups who operated weekly at the WCUM clubhouse to assemble packages. One group used their sewing skills to convert men’s white shirts into much needed hospital jackets. The other group made surgical dressings. The WCUM Bundles group ceased their work at war’s end in September 1945.

Although the war had ended, WCUM continued their vital work. In April 1951, WCUM decided to use the proceeds of special events to fund nursing scholarships for students enrolled at the School of Nursing of Mountainside Hospital. This practice continues today. Clubwomen of WCUM use the proceeds of donated jewelry sold at the “Tiffany Corner” table, which is setup at most WCUM clubhouse events. The proceeds are used to fund nursing scholarships throughout New Jersey.

The Service Guild of Covington 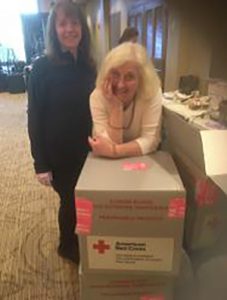 The Service Guild of Covington was founded in 1945. One of its first projects was to coordinate blood drives with the Red Cross, which had recently developed the first national civilian blood program. Today, the Red Cross still provides more than 40% of the blood donations in the United States.

The Service Guild has sponsored as many as six Red Cross blood drives in a single year. Successful drives require planning, coordination, and dedicated volunteers. Service Guild club members communicate and arrange schedules with the local Red Cross chapter to accommodate as many blood drives as possible yearly.

To allow donors the required recovery time between donations, the Service Guild currently schedules quarterly drives. To prepare for a drive, members promote the event through news media and newsletters, and distribute fliers around town. Club members and volunteers register the donors and help them properly fill out all of the required paperwork. Clubwomen also work to ensure that the donation event runs on schedule, and that the donors stay informed, healthy, and happy while at the event. Over time, regular donors have become friends, and some have even joined the club!

The COVID-19 emergency has made Red Cross blood drives even more critical. Shelter-in-place ordinances have also made it more difficult to encourage people to donate. To help ensure safety, the Service Guild of Covington has moved donations to an appointment only basis. To follow all required measures for proper sanitation and protection of everyone, volunteers are required to wear masks and gloves. All donors are screened with a thermometer and donors are spaced six feet apart. The most recent blood drive resulted in 50 units of blood collected, despite the extraordinary circumstance.

In 2019, the Service Guild was awarded a Certificate of Recognition from the Red Cross for our “commitment and dedication to the American Red Cross Premier Blood Partner Program.” In 2020, Service Guild of Covington celebrates 75 years with the General Federation of Women’s Clubs. 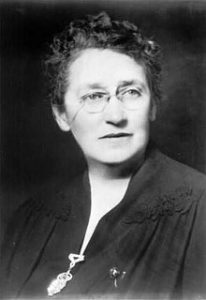 Saidie Orr Dunbar served as GFWC International President from 1938–1941. However, to Oregon clubwomen, and to members of the public health community, she holds extra special significance.

Mrs. Dunbar was a leader in the public health nursing movement both in Oregon and in the nation. She is considered a founding mother of public nursing in Oregon, despite the fact that she did not have a medical background or education. As a young woman, Dunbar expressed a deep concern about the health needs of those around her, particularly those in rural communities. She placed a high value on the knowledge and expertise of medical professionals and used her passion to develop ways to advocate for formidable medical issues. Dunbar also knew the importance of volunteer work and that the participation of community members was key in addressing important medical issues.

In 1908, Saidie became the chairwoman of public health for the Oregon Federation. During her time in this position, she developed an interest in combating tuberculosis. Her interest led her to the position of Executive Secretary with the Oregon Tuberculosis Association in 1913. The position introduced her to the issues faced by Oregon’s rural areas and the lack of public health services which were available there. She traveled across Oregon to promote the establishment of county health departments and set up local groups to aid in the fight against tuberculosis.

Saidie Dunbar served two terms as secretary of the National Conference of the Tuberculosis Secretaries. As a speaker at the National Health Conference in 1938, she said, “We need to ‘face the wind,’ to realize that health services must be provided.” With her leadership and the support of the Oregon Federation, the state legislature of Oregon passed a law in 1941 that provided measures such as blood testing to help control or prevent syphilis in pregnant women.

In 1956, the Saidie Orr Dunbar Nursing Education Scholarship Fund was created by the Oregon Federation of Women’s Clubs, the Oregon Tuberculosis Association, and affiliated county associations to honor Mrs. Dunbar’s contributions to the health and welfare of the people of Oregon and the nation. The scholarship is awarded to students in Oregon that are enrolled in public health or other nursing studies. After 64 years, the scholarship continues to be provided to nursing students in Oregon. 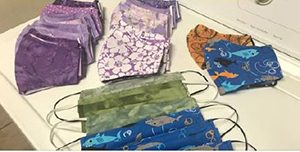 Under differing circumstances, members of NPWC would gather as a group to sew. With the stay-at-home mandate, clubwomen seized the opportunity to sew independently at home. Non-sewing members volunteered as runners and have dropped off fabric and elastic to the sewers, and shipped finished masks to home healthcare agencies, nursing homes, and hospitals in Pinellas County. Other members contributed materials and made financial donations in support of this desperately needed project.

Since this project began, NPWC volunteers have received requests for masks from all over the country, including cities as far away as St. Louis, Chicago, Raleigh, Toledo, and Columbus. In light of the medical supply crisis, and the need for everyone to wear masks while out in public, the group is also working to fulfill requests from NPWC members. 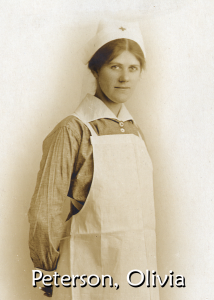 Olivia Peterson was a member of the Starbuck Study Club, known today as GFWC Starbuck Club, in Starbuck, Minnesota. She was born on March 19, 1890, and was raised and educated in Minnesota.

After graduating college, Peterson enrolled in a three-year nursing program offered at a hospital in St. Paul. She accepted a position as a surgical nurse in Decorah, Iowa after completing her program. During her time in Iowa, she enrolled in the American Red Cross Nursing Service.

With the advent of World War I, Olivia was sent as a Red Cross Nurse to a British Hospital Unit at Rouen, France and later to Chamonix, France, for 18 months. In her letters she reflected that seeing many Canadian soldiers on crutches, and with missing limbs, made her realize the severity of the situation.

Olivia returned to the U.S. after her service in WWI and enrolled in a Public Health program at the University of Minnesota and served four years as the first Pope County Head Nurse.

Olivia was offered a position as a field nurse from the American Red Cross Central Division in Chicago, and she also aided with the organization of Red Cross Chapters across Minnesota. In 1941, as the U.S. entered WWII, the American Red Cross came to Olivia for help. Olivia took charge of establishing home nursing programs across the country. Her program was so successful that it was promoted by the Red Cross around the world and was administered through the League of Red Cross Societies in Geneva, Switzerland.

In 1953, Olivia retired and returned to Starbuck, Minnesota, where she became active in GFWC. She also continued her work as a Pope County Health Nurse and served as a consultant for several years for the Minnesota, North Dakota, and South Dakota Red Cross until her passing in 1975.