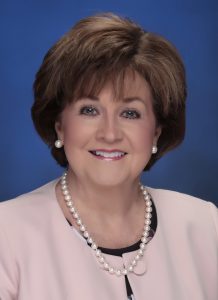 During 42 years on the GFWC Alabama Board, Suellen served all appointed/elected offices including State President (1998-2000) where policy improvements she championed impact Alabama today. She organized exceptional leadership training opportunities, including seminars at the Alabama State Capitol, and implemented state/district LEADS programs.

After being State President, Suellen successfully led the GFWC Safety program, Juniorettes, and GFWC Southern Region as treasurer, secretary, vice president, and president. As president, she strengthened International connections by welcoming the Woman’s Club of Aruba to Southern Region. As GFWC Leadership Chairman in 2012-14, she oversaw a 73 percent increase in GFWC State LEADS programs; she and the committee provided numerous leadership tools/resources.

A native Alabamian, she and husband Billy have two sons. Retired after 44 years with Baldwin County Schools, her final position was Executive Elementary Administrator supervising 28 elementary schools and 18,000 students. Working with domestic violence prevention, homeless, and veterans keeps her grounded in grassroots service.

If there is time in the day to lend a helping hand, Irene Iverson will do it. A member of two GFWC clubs and recent honoree of the One OC Spirit of Volunteerism Award for 2014, Irene has been an active leader in her community since she joined the Red Cross as a volunteer at 15.