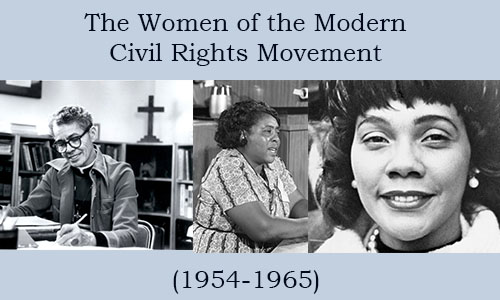 Every Martin Luther King, Jr. Day, we reflect on the man who helped build and elevate the Modern Civil Rights Movement. GFWC applauds him and the men with whom he worked! However, the women of the movement, who were foot soldiers, organizers, and the beating heart of the movement, too often go overlooked.

In 1961, President John F. Kennedy formed the Presidential Commission on the Status of Women. The Commission was established to advise him on issues surrounding women’s equality, primarily workplace issues. The Commission employed such varied members as Eleanor Roosevelt, Robert Kennedy, and then GFWC International President Katie Ozbirn. The commission also included civil rights leaders like activist and lawyer Pauli Murray. She published the book State’s Laws on Race and Color, which Supreme Court Justice Thurgood Marshall referred to as the “bible” of the civil rights movement. While sitting on the Presidential Commission, she became one of the first major figures to openly criticize the leadership of the burgeoning Civil Rights Movement for their overt discrimination against women. Fannie Lou Hamer organized the Student Nonviolent Coordinating Committee and helped change the entire conversational tone of the media towards the Modern Civil Rights Movement. Coretta Scott King, wife of Dr. King and one of the best known women of the movement, not only worked alongside her husband, but helped to mold and inspire his positions, such as his criticism of the Vietnam War. She was an activist in her own right and continued her husband’s work long after his assassination.

Finish planning your MLK Day of Service projects to honor not only Dr. King, but the women of the civil rights movement who worked by his side. Promote your club’s project or event with our press release template! 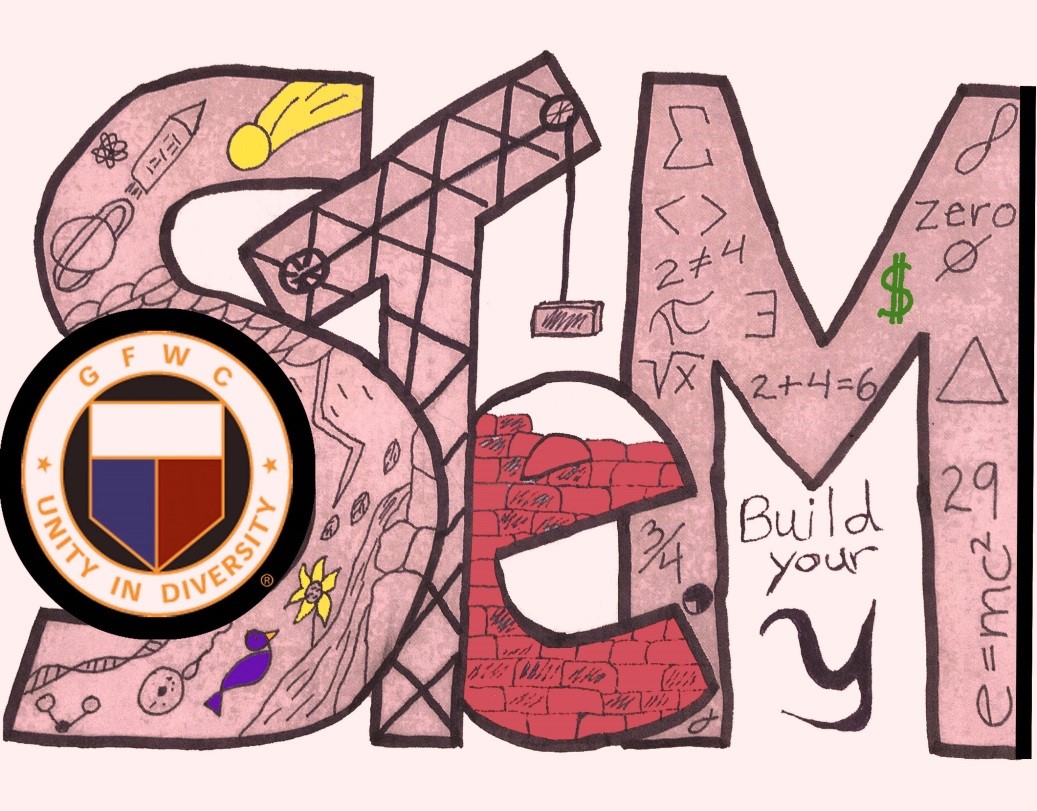 For the 2018–2020 Administration, GFWC Arizona is focusing on encouraging more students—especially girls—to pursue an education in science, technology, engineering, and mathematics (STEM). This is the basis for asking Arizona members to create STEM bags, since these fields form the foundation of 21st century living and have made many commonplace conveniences possible.

These STEM bags will introduce children of all ages to critical thinking, problem solving, collaboration, and the tools to question everything around them. At GFWC Arizona’s Fall Board meeting, 70 members participated in a STEM project to make lip gloss. But there are many readily available items that Arizona clubwomen are using to make STEM bags: crayons, journals, and STEM-inspired learning cards or books. Clubwomen can easily influence children by encouraging them to simply write down what they see in nature around them; for example, record flowers seen on walks: flower colors, sizes, and when they were spotted. These notes will teach children to keep records of their discoveries and inspire them to learn more. Arizona clubwomen are also seeking guidance on creating their STEM bags from NASA, PBS, or the Society of Woman Engineers.

Arizona clubs plan to distribute 1,000 STEM bags by 2020; more than 100 bags have been dispersed to date. Everyone benefits from more students and personnel in high technology fields, so why not join the effort? If every clubwoman could excite just one student to pursue an education in STEM, think of what could be accomplished! Maybe a young woman will be inspired to find the cure for cancer or solve world hunger.

Celene is a Canine Companion for Independence puppy named in honor of GFWC Public Issues Program Chairman Celene Post. That honor was made possible by her club, the Washington Women’s Club (Arizona). They raised and donated $50,000 for Canine Companions for Independence (CCI)! Michele Paden is a member of their sister club, the Mountain Home Cameo Club (Arizona). Her 16 year old daughter, McKenzie, committed to raising Celene during her last two years of high school. She will care for, train, and socialize Celene until 2020 when McKenzie goes off to college and Celene goes to CCI for professional training. Michele visits local schools with Celene to educate students about the importance of service dogs. She reads to the children from Celene’s “paw-approved library.” While the family will miss her when it’s time to say goodbye, they already feel how rewarding it is to raise Celene for someone who needs her. You can follow Celene’s doggie journey on her very own Facebook page.

Unfortunately, an email like the sample above could find its way into your inbox. Without closer inspection, it might be easy to mistake this as legitimate:

Spoofing is the practice of creating emails that aim to trick recipients into thinking it is from someone they know. It’s a way for scammers to take advantage of you. If you receive an email requesting money or the purchase of items from what appears to be a fellow GFWC club member, check the email address. In the sample, the email says it is from Mary Ellen Brock. But when you look at the email address, it’s generic and does not match her real email address. That’s the number one sign of a fraudulent email; always carefully check the source of suspicious emails like this one.

Our condolences to Carolyn Nash, Past GFWC Utah President (1996-1998), whose husband, Ronald, passed away on January 1.

Our sympathies are with the family of Isabel Edmands, Past State President of Tennessee (1980-1982) and Past President of the Southeastern Region (1986-1988), who has passed away.

Keep Karen “Kandy” Kizis, Past Alaska State President (2008-2012), in your thoughts. She has been recovering in transitional care after several hip surgeries.

“Members Equal Service,” what does this mean? Members and service go hand in hand. Think about it: the GFWC membership is made up of dedicated constituents making a difference in their communities through service efforts. Working with women in our communities enables us to facilitate the growth of new, vibrant members, and there is no better time than the present to invite new members. The most effective way to get new members is to “ask,” but remember that recruiting new members may sometimes require more than one invitation.

GFWC’s Thank You Tuesday Campaign is one way to get the attention of member prospects among your family and friends. Share the ways that belonging to GFWC has transformed your volunteering experiences on GFWC’s Facebook Page.

New members are a natural way to add value to our Federation, clubs, and communities. When it comes to growing our membership, it may not be at the top of your club’s list this new year, but here’s the secret: it should be. When the GFWC membership grows, so does the service. With that in mind, let’s keep asking.

We are happy to announce that the Rise Against Hunger meals clubwomen packaged at the GFWC 2018 Annual Convention have been assigned their destination! They will be sent to serve communities in Timor-Leste. Thank you to our volunteers for helping end hunger!

The Convention Program Ad form is now available! Honor a fellow clubwoman with one of our Austin-specific designs or submit your own! Order and pay for your ad by March 29!

GFWC’s Success for Survivors Scholarship gives survivors of intimate partner violence the means to achieve financial and personal independence as they pursue higher education. Applications are due February 1. Spread the word!

Start off the new year by acknowledging a clubwoman who goes above and beyond. Submit a list of her key accomplishments to pr@gfwc.org to nominate her to be considered as a Featured Member on the GFWC website!

We’re so excited for this year’s Women’s History Month Event. Marci Reaven, Vice President of the History Exhibits at the New York Historical Society, will talk about the role that woman’s clubs played in preserving the Hudson River’s Palisades region. Email AConstad@gfwc.org by February 14 to RSVP for this enlightening event!

Corporate Charter: This document may have any of several names, depending on in which state you are located. It may be called a Certificate of Incorporation, Articles of Incorporation, Articles of Association, etc. It is a legal document listing the name and object of the group and whatever other information is needed for incorporating your club under the laws of your state. While you don’t think of yourself as a corporation, this is one of the most important governing documents your club can have! If you are ever sued, and lose, not only can the contents of your club treasury be emptied, but the assets of every member of the club can be attached. (Every member, not just the officers!) If you are incorporated, then only the club’s money is at stake, never that of the members. While it doesn’t seem possible that your club could be sued, think of this: if anyone gets hurt on club property or at a function being run by the club, that person’s insurance company may tell them that they have to sue to recover some of the costs. Even if your club carries liability insurance, it will not cover a suit from one of your own members.

A corporate charter should not be confused with a charter issued by some state or national bodies to a new affiliate organization. That charter recognizes a new group that has become a member of the larger group. A corporate charter is issued by the state and is a legal document that is necessary depending on the laws of the state, to hold property, make legally binding contracts, hire employees, be in a position to sue or be sued, and to protect its officers and members from personal liability.

From club events to travel plans for convention and region conferences, there are a lot of dates to keep track of. Plan for the new year with GFWC’s 2019 Desk Calendar, now 20% off! Get yours for $8 in the GFWC Marketplace.