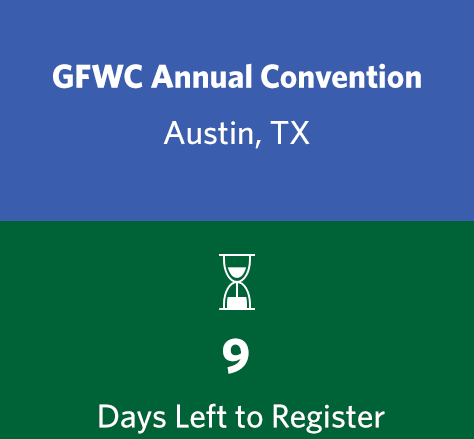 Your time at the 2019 GFWC Annual Convention is an opportunity to explore Austin! You can join us on our Tours if you register by June 1, but don’t miss out on some of these sites you can visit on your own:

In addition to hosting approximately 100 concerts a year, this venue is the home to the Austin City Limits television show and offers tours.

Spend some time outdoors and check out more than 300 animals!

Take a look around one of the leading university art museums in the country. From Latin American art to ancient Greek pottery, you’ll be sure to find new art to love.

Take in the beautiful view and experience Former First Lady Johnson’s legacy of protecting the environment.

With less than two weeks left to register for Convention, it’s time to map out your Austin adventure. Remember, registration after June 1 will result in additional meal charges, so there’s no time to lose. Register now; Austin awaits!

Memorial Day is on Monday, May 27, a day for you and your club to honor the men and women who died while serving in the United States Military. It was originally known as Decoration Day after the tradition of decorating soldiers’ graves with flowers. Women in Pennsylvania began this practice as early as 1864 following the end of the Civil War. Soon other states and cities did the same.

Waterloo, New York, held an annual community-wide event beginning in 1866. This led the town to be recognized as the birthplace of Memorial Day by the federal government in 1966. Memorial Day became an official federal holiday in 1971. In 2000, Congress passed a resolution, urging Americans to set aside 3:00 p.m. on Memorial Day “to observe a national moment of remembrance to honor the men and women of the United States military who died in the pursuit of freedom and peace.”

Memorial Day weekend is often thought of as the beginning of the summer season–family barbecues, fishing trips, and community parades. Please remember to pause for one moment to remember the sacrifice of our valiant military service members.

Welcome an Honor Flight with GFWC

Please join with us when we welcome the next Honor Flight from West Central Florida on Tuesday, June 11th at 10:15 A.M. at the Air Force Memorial in Arlington, Virginia. This long-standing activity is always a pleasure to be a part of, so join us in celebrating veterans. Let us know if you can make it!

You or your club can make the Lone Star Raffle an exciting part of the 2019 GFWC Annual Convention! Send the raffle donation form to Jennifer Simpson at jsimpson@gfwc.org. Donations can be sent to GFWC Headquarters if delivered by June 1, or you can bring your donation to Convention if the form is sent beforehand. We recommend handheld items that are easy to travel with. Donate to the 2019 Convention Raffle to make the winner’s day!

As we approach both Memorial Day and the 70th anniversary of D-Day, GFWC is reflecting on valiant women who have served their country. Although all U.S. Military combat jobs weren’t open to women until 2016, American women have a long history of fighting and making sacrifices for their country during wartime.

It wasn’t until the last two years of WWI that women were officially allowed to join the military. Eager to do their part, GFWC assembled its own overseas unit under the direction and guidance of the YMCA, accepting 100 young women. Fighting ceased before the girls were able to depart, but the unit still shipped out to France in early 1919 with the goal of “illustrating concern and caring feeling” for the American men serving overseas. In light blue uniforms with an insignia reading “General Federation of Women’s Clubs Unit,” the young women were scattered throughout France, Belgium, and Germany to perform rolling canteen duties and aid the troops within their recreation areas. On the home front throughout WWII, clubwomen raised over one million dollars for the Air Force by selling war bonds. They also continued to train and recruit nurses, and in many cases temporarily donated their clubhouses to the Red Cross to use for training offices.

The WHRC maintains an impressive photograph archive which helps document the efforts of clubwomen throughout war time. Our most extensive collection captures the experiences of Freddie Hilp, a Nevada Clubwoman who manned a rolling canteen during World War I. You can also view the wedding dresses donated by clubwomen during World War II for British service women (including Mary Pickford’s own wedding dress)!

Last spring, GFWC Connecticut’s Executive Board chose a general State Project direction that members could work on in their communities. The specific project was then left up to Leslie Apostalon; she chose Tackling Hunger Insecurity. There is hunger everywhere. Although we cannot solve world hunger, we can address the problem in our communities.

The project’s goal is to educate members on the situation. There have been speakers for Foodshare and The Food Bank in Connecticut, both part of the larger Feeding America organization. GFWC Connecticut has also featured a speaker from The Outreach Program; its mission is to provide safe water, food, medical care, and education to children in need at home and abroad. Printed materials were available at every board meeting.

A second goal is to activate GFWC Connecticut members at the local level in their communities. They are assessing the needs and providing help in various ways, such as donating, volunteering, and joining the Hunger Action Team in their town; hosting, partnering, and starting backpack programs; building community gardens; assisting at fundraisers; and attending symposiums that plot successes for future plans, ideas, and challenges.

At the end of this Administration, the project’s success will first be measured by the amount of clubs and members who volunteered and the number of volunteer hours. Second, the education received not only to clubwomen but to the overall issue of food insecurity in Connecticut will be measured. Finally, and perhaps the hardest, GFWC Connecticut will measure how many individuals were impacted—and in what way were eﬀorts most helpful.

There have been a few fundraisers to date. The largest was a casino bus trip. At Christmastime and during the March Board Meeting, there were candy and baked goods sales. Some clubs have given monetary donations as well.

We send our deepest condolences to the family and friends of Diane McCurley, Past GFWC Bylaws Committee Member (2016-2018) and Past Massachusetts Director of Junior Clubs (2014-2016), who passed away this week.

Where in the World is GFWC?

During your summer travel plans this year, take a picture of this “flat GFWC” and post it with the hashtag #GFWC1820. The GFWC Juniors will award winners for the most creative, funniest, and furthest distance, so snap those photos so so we can see everywhere GFWC goes this Administration! 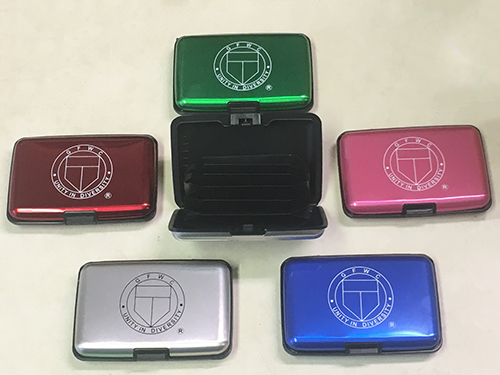 GFWC’s credit card wallets are a practical way to keep all your cards and money in order. Bring it to the GFWC Annual Convention to hold your business cards! Get one for $10 in the GFWC Marketplace.