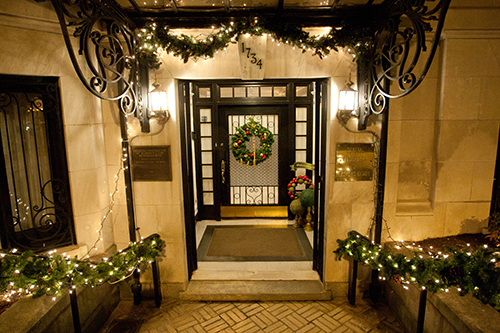 You’re invited to GFWC Headquarters on December 5 for our annual Holiday Open House! From 3:00-6:00 p.m. you can enjoy hor d’oeuvres, refreshments, and a festive spirit. Take in the dazzling floor-to-ceiling Christmas tree, holiday décor, and mingle with fellow clubwomen.

If you or your club is planning to donate Dr. Seuss books to Headquarters and are attending this event, save on postage and bring them along! What better way to kick off the season of giving?

Join us in celebrating the season at 1734 N Street NW, Washington, DC 20036. RSVP by emailing events@GFWC.org.

Last week was GFWC Advocates for Children Week, and clubwomen made big waves in their community! GFWC Wisconsin is a great example of the success clubwomen achieved this year. It started off with GFWC Wisconsin President Deb Brossard requesting and receiving a Proclamation from the Governor’s Office, establishing October 21-27 as GFWC Advocates for Children Week in their state!

Clubs all across the state answered the call and made a difference in the lives of children. For example, the GFWC Woman’s Club of Greenfield purchased a Buddy Bench for a local school. Whether they’re new or just shy, some children have difficulty interacting with other children at recess. Students will be told that if they see a peer sitting on the bench, it means they’re looking for a friend, and that they should go talk to them! The club used Advocates for Children Week to help young students foster friendships that will help them succeed personally and academically.

To read about more projects, check out this week’s Volunteers in Action post on the GFWC Blog!

The Women’s History and Resource Center’s 2019 Women’s History Month Event will be held on March 7 from 4:00-6:00 p.m. Keynote speaker Marci Reaven, Vice-President for History Exhibitions at the New York Historical Society, will begin speaking at 4:30. RSVP by February 14 to aconstad@gfwc.org.

Military Women: Did You Know?

In 2016, Air Force Gen. Lori J. Robinson was the first female service member to lead a unified combatant command, which is a command composed of forces from at least two Military Departments and has a broad and continuing mission. As leader of U.S. Air Force Northern Command, she became the highest ranking woman in U.S. military history. The year 2016 was also the first time that female enlisted sailors deployed on submarines.

Make your club’s celebration of women in the military one to remember on Veterans Day. Check out these project ideas. Then promote your club’s observance with this press release template and submit your Veterans Day Volunteers in Action success stories to pr@GFWC.org.

Join the USO and Politico for The Salute to Military Spouses! Tune into the livestream on Wednesday, November 14 at USO.org/MilSpouseSalute bringing together military spouses, military support organizations, business leaders, and key USO supporters to examine and discuss key issues that matter to our military spouses: education and employment, community building, peer networking and family-strengthening programs. Invite others to tune in online and use the #MilSpouseSalute hashtag in your own social media channels to share your own experience as a military spouse or to give a salute shout out to a military spouse you know.

Is there a member of your club who inspires you? Nominate her to be considered as a Featured Member on the GFWC website by submitting a list of her key accomplishments––and anything else you feel will be important to properly recognize her–– to PR@GFWC.org. Know a whole club of inspiring women? Tell us about their club milestones too. GFWC clubwomen do such incredible work, and we want to sing their praises! 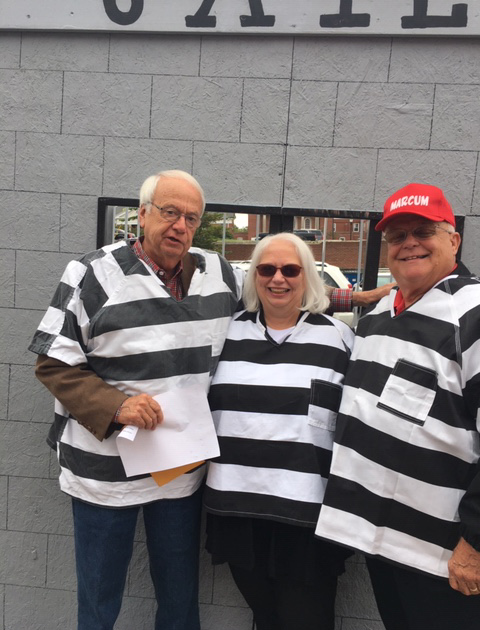 GFWC Kentucky President raises money for a local suicide prevention
coalition by participating in a jailathon.

The Kentucky 2018–2020 Administration’s focus is on preventing suicide and increasing organ, tissue, and bone donations. The suicide prevention project, which a counselor chairs, aims to remove the stigma of suicide by openly acknowledging it without embarrassment and shame. The organ donor project seeks to dispel myths about donating organs before individuals face death so that they make an advanced choice to save someone’s life.

Up to age 34, suicide kills more people than all cancers combined and is the second leading cause of death for preteens, teens, and young adults. Older adults have the second largest number of suicides. And, veterans are especially at risk. When someone dies by suicide, that family has a 65% chance of having another suicide.

In just the United States, more than 21 people die daily awaiting an organ transplant. Organ donations can restore sight, cover burns, repair hearts, replace veins, mend damaged connective tissue and cartilage, replace diseased bone or joints, or replenish blood supply. The organ donation program was inspired by a member’s devotion to helping her sister (also a member), who eventually received a double transplant and is doing well. They chair this program together.

These projects also remember Pat Harrington’s husband, who had passed away by suicide. He was a registered donor and everything that could be used after his death was given to create brighter futures for many, many people. 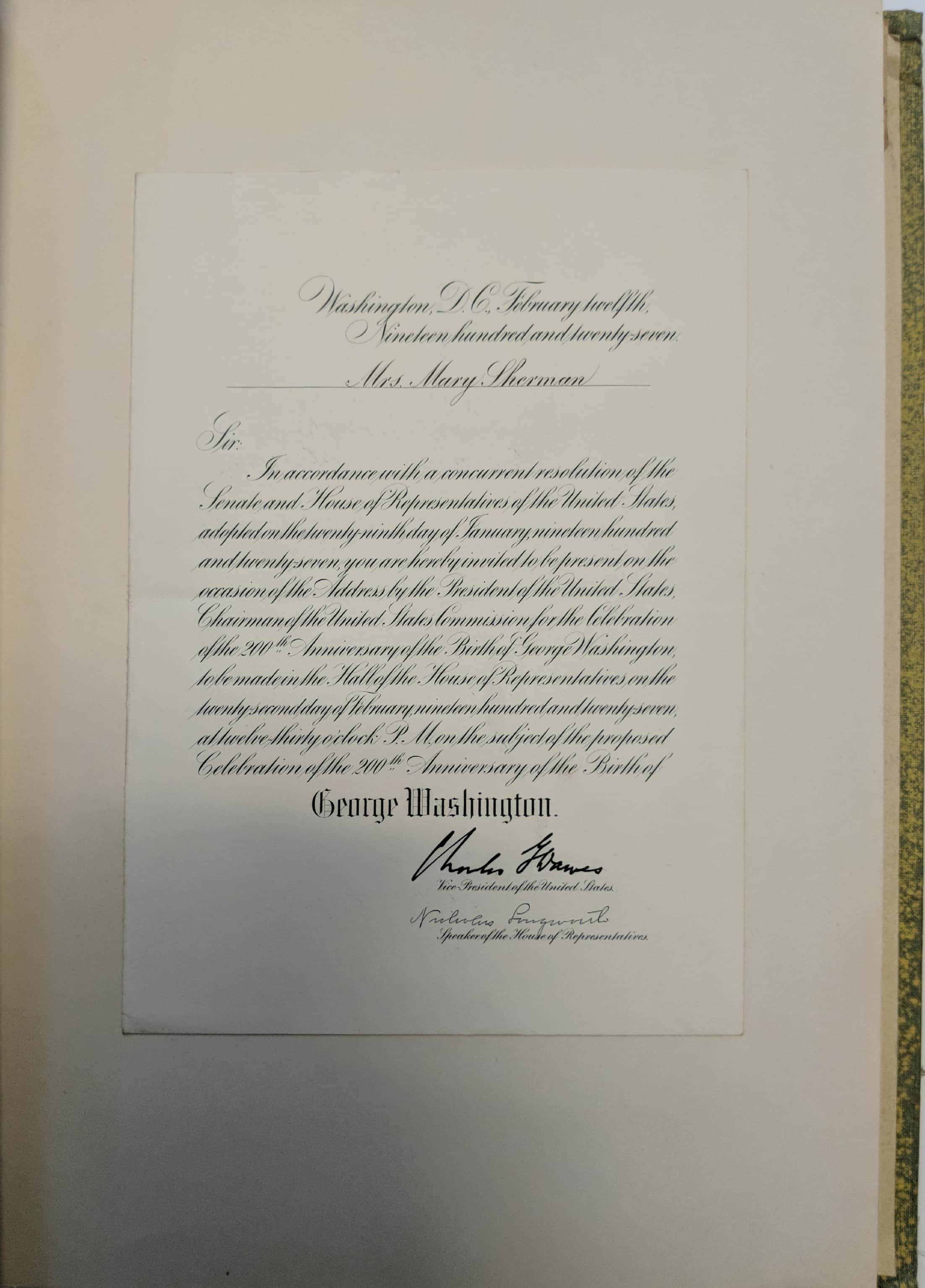 Scrapbooking is a time-honored tradition that helps us keep track of events, bolster our memories, and indulge in our longing to understand the past. Some scrapbooks, like those in our Community Improvement Program collection, serve an administrative purpose and enable us to track the progress of different clubs and projects. Occasionally, a scrapbook, such as our collection of Presidential scrapbooks, can both humor our nostalgia and serve as a benchmark of past achievement.

From 1924-1970, several International Past Presidents voluntarily kept detailed scrapbooks of their time at 1734. While every book is different, they all document the administration of each Past President though a collection of invitations, newspaper articles, photographs, and correspondence. Over the coming months, the WHRC will be sharing the collection with you, digitizing each book in its entirety in chronological order. This first installment features the scrapbooks of International Past President Mary King Belle Sherman (1924-1928).

The collection can be found on our online catalog under the search term “SCRAP.”

Join GFWC in supporting H.R.6649 and S.3304, the 3D Printed Gun Safety Act. Recent technological advancements have allowed for the printing of firearms and firearm parts, including parts made out of plastic, by unlicensed individuals in possession of relatively inexpensive 3D printers. These plastic firearms cannot be detected by metal detectors at security checkpoints nor can they be traced by law enforcement because they are not printed with serial numbers. This law would make it illegal to publish digital instructions or code over the internet that would automatically program a 3D printer to produce a firearm. Contact your U.S. Senators and Representative today urging them to support this bill!

The Reed City Woman’s Club (Michigan) realized there were no formal art classes given in the elementary schools in their district. There’s an art studio in a neighboring community that invites
the children to come in and experience different types of art. Members help to pay for these local classrooms to have a full day at the art studio, helping them to have an introduction to art. The project was listed in the GFWC Top 10 Projects. 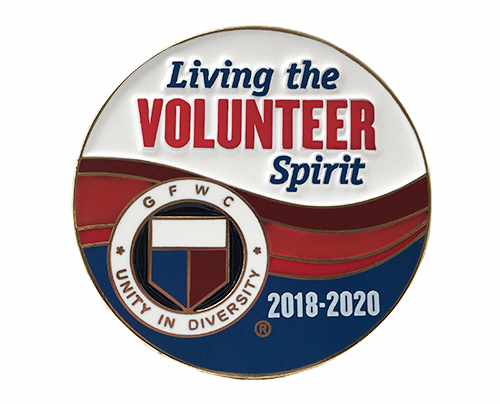 STEP 1. A member stands up, is recognized, and makes a motion.

Common Mistakes: Members do not stand up, do not wait to be recognized, and typically start to discuss their motion before completing STEP 2, STEP 3 and STEP 4 below.

STEP 2. Another member seconds the motion.

Common Mistake: The person seconding the motion dives into the merits of the motion.

STEP 3. The presiding officer restates the motion to the assembly.

STEP 4. The members debate the motion.

Common Mistakes: Debate gets out of control in temper, in duration, in relevance.  Members talk at each other across the room rather than through the presiding officer.

STEP 5. Presiding officer asks for the affirmative votes and then the negative votes.

Common Mistakes: The presiding officer states ‘All in favor’ and fails to tell the members what to do as a matter of voting (for example ‘say aye,’ ‘stand up,’ ‘raise your hand,’ etc.) or the negative vote is never requested or counted.

STEP 6. The presiding officer announces the result of the voting, instructs the correct people to take action, and introduces the next item of business.

Common Mistakes: Presiding officer fails to pronounce the result of the voting. No one is instruction to take action. Commonly, dead silence follows because the presiding officer is lost and stares at the assembly.

We love to celebrate clubs who have lasted the test of time and become staples in their community. Here are some recent anniversaries that clubs have celebrated:

The Haddon League of the Haddon Fortnightly (NJ)