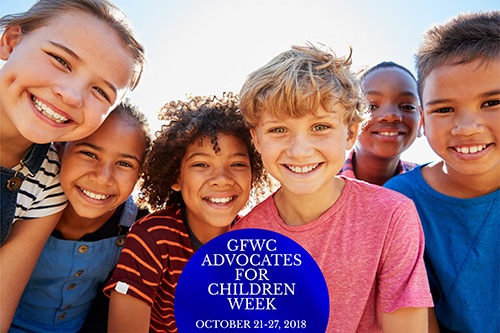 GFWC has a long history of child advocacy, including work towards preventing child labor, supporting proper health care for mothers and their babies, and establishing public libraries and kindergartens. Add to the legacy with your club’s project this week!

If your club didn’t decide on a project, it’s not too late. Read the Juniors’ Special Program section of the Club Manual for a wealth of ideas for how you can make a difference in a child’s life. It might just be a week on the calendar, but your impact will last much longer. Send your success stories to Volunteers in Action by emailing PR@GFWC.org.

Our thoughts are with 2002-2004 Illinois State President, Marge Nelson, whose husband, George, passed away this week.

Welcome An Honor Flight With GFWC

Please join with us as we welcome the next Honor Flight from West Central Florida on Tuesday, October 30, 2018, 10:00 a.m. at the Air Force Memorial in Arlington, Virginia. This has been a long standing activity for local volunteers and staff from GFWC Headquarters. With Veteran’s Day around the corner, it’s a perfect way to recognize those who served!

This year’s event will feature a talk by Marci Reaven, VP History Exhibits at the New York Historical Society. On March 1, the New York Historical Society will be opening their new exhibit, Hudson Rising: 1825-2025. Hudson Rising will explore two centuries of ecological change along the Hudson River, and dive into ecological, industrial, and historical reasons for the vast changes it has endured both environmentally and scenically. Marci will discuss the exhibit, as well as the role that woman’s clubs played in preserving the Hudson River’s Palisades region. When the New York and New Jersey legislatures failed to stop the destruction of the Palisades, GFWC New Jersey joined forces with the American Scenic and Historical Preservation society to generate public support for making the Palisades into a public park. Their efforts lead to the creation of the Palisades Interstate Park Commission and Palisades Interstate Park, one of the first interstate efforts to preserve the scenic beauty of an area.

RSVP by February 14 to learn about this remarkable history by emailing AConstad@GFWC.org! 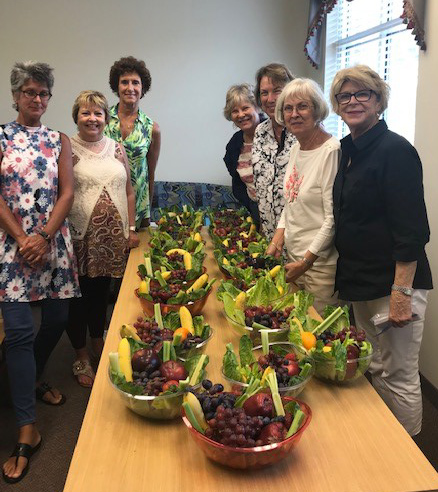 The 2018-2020 GFWC North Carolina President’s Special Project is “Healthy Women.” There is no better way to celebrate women than to focus on health, especially since women tend to put themselves last. Women need to care for themselves to take care of others.

The goal for GFWC North Carolina women is to collectively walk more than 250,000 miles in two years. A President’s Special Project Award will be highlighted at each District Fall Meeting. It includes reporting for all three key project areas, as well as sharing the top five health-related programs and the most creative initiatives bringing awareness to women and local communities.

The Healthy Women Project was kicked off at the GFWC North Carolina Summer Meeting with colorful fruit centerpieces and special guest speaker Dr. Christina Bowen. Dr. Bowen spoke about “replenishing your well:” to be healthier, happier, and a “better you.” Clubwomen have taken the message to heart!

Military Women: Did You Know?

In January 2017, the first female Marine completed the Infantry Officer Course after the Marine Corps opened the program to women in April 2016. Support the many courageous women like this lieutenant and plan your Veterans Day observance. Here are some project ideas.

The GFWC Northboro Junior Woman’s Club (Massachusetts) co-hosted a Repair Café event to find alternatives to throwing away broken items. Their event reduced waste and brought together community members at the same time. Volunteers repaired bikes, furniture, jewelry, and small appliances, and sharpened knives, scissors, and gardening tools. Make conservation a priority in your community! The project was listed in the GFWC Top 10 Projects.

Did you know that 1734 used to contain a restaurant called the Federation Tea House? The space, which was formerly used as stables and currently houses the Iron Gate Restaurant, was open to both clubwomen and to the general public. In 1924 GFWC turned the Tea House into a “Home Making Center,” which provided demonstrations of all the latest kitchen appliances!

Learn more about the Federation Tea House and the history of GFWC through the second edition of Rising by Light to Higher Things. Now available through the GFWC Marketplace, Rising by Light details the WHRC’s one-of-a-kind museum and archival collection.

100% of the proceeds from the book are donated to the Women’s History and Resource Center.

The minimum number of members who must be present at a meeting to validly conduct business is called a quorum. Requiring a quorum is a protection against a small number of members taking action when attendance is low.

A provision of the bylaws should specify the number of members (not a percentage of members) that shall constitute a quorum. A good rule for determining what an organization’s quorum should be is to determine the number of members that can be depended on to attend any meeting except in very bad weather or some other unfavorable condition. This number is usually considerably less than a majority of members in the group.

Before the presiding officer opens a meeting, it is her responsibility to determine if a quorum is present. If a quorum is not present, the chair waits until there is one, or until there appears to be no prospect that there will be a quorum. In that case, the chair calls the meeting to order, announces the absence of a quorum, and entertains a motion to adjourn.

Once a meeting has been called to order, it is assumed that a quorum continues to exist unless the chair, or a member, notices that a quorum is no longer present. At that point, there cannot be a vote on any question and no one can make any new motion.  The meeting must adjourn.

The prohibition against transacting business in the absence of a quorum cannot be waived, even by unanimous consent. The proper procedure would be to set up a meeting to take place before the next regularly scheduled meeting, and then adjourn.  If, however, the members present take action informally, they do so at their own risk.  Although the assembly can later ratify the action taken without a quorum present, it is under no obligation to do so.