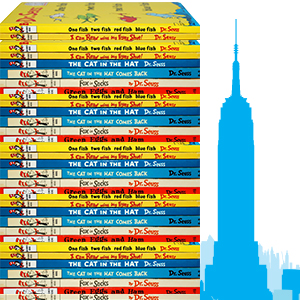 September 8 is International Literacy Day, celebrated to acknowledge how important literacy is for individuals and their communities. Literacy starts with the first books you put in a child’s hands. The original goal of GFWC’s Dr. Seuss Grand Initiative was to donate 1,000 books to children who might not otherwise have an opportunity to have a book of their own. But in one year, clubwomen donated 50,716 books. If you stacked them, the pile would be taller than the Empire State Building!

Celebrate International Literacy Day by collecting Dr. Seuss books for local daycares, Head Start programs, and schools at a disadvantage. The books will make reading accessible and enjoyable for kids who are just getting started. The updated Dr. Seuss Grand Initiative goal is to have donated 55,000 books by June 2020. Start planning your Dr. Seuss drives to rise to the challenge and surge even further above the Empire State Building’s very top!

Youth Suicide Prevention is one of GFWC’s Resolutions because young people aged 15-24 experience alarming rates of suicide. Community leaders like your club can make a difference.

Raise awareness of the issue. The International Association for Suicide Prevention encourages everyone to light a candle in their window at 8PM on World Suicide Prevention Day to acknowledge those we’ve lost to suicide and show support for those who have survived it or struggle with suicidal thoughts.

Support a teen crisis line. Crisis lines are critical to suicide prevention, and those services are made possible by volunteers.

Get involved with local programs. Find out if the schools in your area have programs or services that assist with suicide prevention. If they do, ask how you can help support it! If they don’t, advocate for implementation.

Take this day to raise awareness of suicide prevention and to show your support for youth in your community.

We send our condolences to Past GFWC Washington State President Kathie Jorgensen (2010-2012), as her husband, Ken, passed away last week.

Please keep Mary Jo Thomas in your thoughts and prayers as she recovers from a recent health issue.

GFWC’s thoughts are with everyone impacted by Hurricane Dorian. The damage to the Bahamas has been extensive, so we will be reaching out to our clubwomen in the Grand Bahama American Women’s Club to figure out the best way to provide assistance. We hope for the safety of any communities in the hurricane’s path.

Class is back in session so this month’s #ThankYouTuesday theme is “Back to School!” As GFWC clubwomen, you’re constantly learning new things about yourselves, each other, and your community. What is the most valuable lesson GFWC has taught you? Let us know on our Facebook post!

State President Dori Kelsey selected Girls Love Mail as one of her special projects when she learned about the organization and its founder, Gina L. Mulligan, on the news. The concept is simple: to write letters to people who have been newly diagnosed with breast cancer. The handwritten letters of support are sent to Gina, who distributes them to women in cancer centers across the U.S. With each letter, you are giving a piece of yourself to someone in need of comfort. Go to girlslovemail.com to write your own letter! It’s a great “Done in a Day” project for any club because it does not cost a lot of money.

The second special project is “Adopt a Shelter Pet.” Growing up, Dori’s parents raised and showed Persian cats, so pets have always been important to her. Since then, all of her pets have come from shelters. Last summer, her 18-year-old cat passed away and so she adopted “Louie,” who became the mascot of GFWC California’s Facebook page to promote the project. Louie is a handsome orange male cat who gets his own photoshoot every Wednesday morning. He even has his own hashtag! This has been great for the Facebook page, which has grown to 4 times its previous size since Louis became a feature. People check in each week see Louie’s photos and get caught up on the news. They now feature another rescue pet, Dexter the dog, to share the spotlight and show how important it is to support shelter pets. Dori is happy to hear from members who have been inspired by the project to adopt pets of their own from all types of shelters. It shows that Louie, and now Dexter, are doing their jobs! Check out more photos on Pinterest.

Parliamentary Pointers: A Rose By Any Other Name…

There’s a special language used in parliamentary procedure, and it helps if everyone follows the use and meanings of the language.

When you want an action taken, you do not say: “I make a motion!” The proper wording is: “I move to…” and then say what action you want taken.

We’re advised to create motions that are clear, concise, and state what we want, but many times others in the group may want to make a change to the motion. In that case, the word amend is used, as in: “Madame President, I move to amend the motion by adding the words…”

In parliamentary language, the word debate does not mean two teams of great speakers arguing over a question. It means people discussing the motion that has been made. Whether you are for it, against it, or want to amend it, you are debating the question.

Most motions need a majority vote to be adopted. “Majority” means more than half of the members present and voting in a regular or properly called meeting. If you have 34 members present, but only 30 choose to vote on the question, then you need 16 members to vote yes in order for the motion to pass. If you have an evenly split vote, 15-15, you do not have a majority and tie votes are lost votes. The four members who have chosen not to vote in this hypothetical case are not figured into the number.

Reconsider is used in a motion which enables a majority of the assembly to bring back a motion that has previously been adopted. The purpose of reconsideration is to permit correction of hasty, ill-advised, or erroneous action, or to take into account added information or a changed situation.  There’s a time constraint to reconsideration. 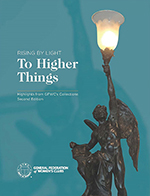 Looking for a new way to spread the word about GFWC? The WHRC Collections Book is the perfect coffee table book to start a conversation anytime someone visits! Detailing over a century’s worth of the organization’s history, it’s a simple recruitment tool that will have your guests wanting to be a part of that history. Get your copy for $15 in the GFWC Marketplace.