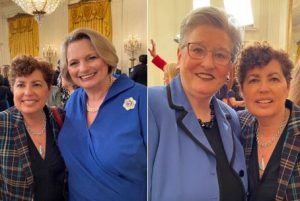 The General Federation of Women’s Club (GFWC) applauds President Joseph Biden’s appointment of Lynn Rosenthal as the first Director of Sexual and Gender-Based Violence at the Department of Health and Human Services (HHS).

“On behalf of the GFWC, I want to congratulate Lynn Rosenthal on her new role with HHS,” said International President Deb Strahanoski. “HHS now has the dedicated expertise to coordinate responses to sexual violence and to ensure the specific needs of those who have experienced trauma are considered and addressed.”

Rosenthal’s experience as an advocate for women spans decades in the government and private sectors. From 2009–2015, Lynn served as the White House Advisor on Violence Against Women; and, represented Biden on the White House Council on Women and Girls, and the White House Task Force to Protect Students from Sexual Assault. GFWC worked with Lynn to get the reauthorization of Violence Against Women Act signed into law in 2013. In 2021, Rosenthal chaired the Independent Review Commission on Sexual Assault in the Military, which made bold recommendations to address sexual assault and harassment in the armed forces. Many of those recommendations related to accountability, prevention, climate and culture, and victim care/support have been enacted by Congress.

“I had the pleasure of working with Lynn on the reauthorization of the Violence Against Women Act enactment,” said National Alliance to End Sexual Violence CEO and President Monika Johnson Hostler, Honorary Chairman of the GFWC Signature Program on Domestic and Sexual Violence Awareness and Prevention. “Lynn is a powerful advocate for those who have experienced gender-based violence. I’m looking forward to working with her in her new capacity at HHS.”