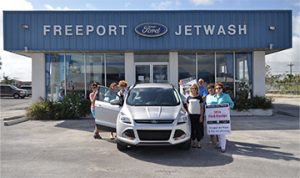 The destruction wrought by Hurricane Matthew to Grand Bahama island in October 2016 was beyond destructive. The category four storm brought 100-mile-per-hour winds and staggering storm surges that flattened homes and businesses and significantly damaged 95 percent of the structures on the southwest coast.

Many people lost everything, and with power, cable, and Internet gone and the airport and harbor closed for days, millions were lost in tourist revenue. Eight months later, two of the island’s largest hotels remain closed, other businesses have failed and many are jobless. The national unemployment rate sits at an estimated 17 percent.

Nonetheless, the Grand Bahamas American Women’s Club raised over $36,000 at its annual golf tournament in February – despite fears of a decline in corporate sponsorships, individual donations and player turnout. “It was the most we’ve raised in 14 years,” said Club President Christine Gardner. “Club members gave it their all and the community was very, very generous.”

With those funds, the club, which celebrated its 50th anniversary last year, was able to provide scholarships to 16 high school students and $8,500 to community organizations. The club also collected and delivered several truckloads of food, clothing, and household goods to hurricane victims in conjunction with the local Rotary and Canadian Women’s Clubs.