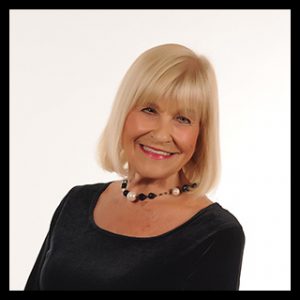 On November 17, 2019, GFWC was saddened to learn that Jacquelyn (Jackie) Pierce, International President from 2006–2008, passed away that morning.

Born and raised in Hannibal, Missouri, Jacquelyn earned her Bachelor of Science in Education from Illinois State University and her MA in Arts Administration from the University of Illinois. She was a dedicated teacher for more than 20 years, served as a Home Advisor for the University of Illinois, owned her own interior decorating studio, and presided over the H.I. Pierce Corporation. Jackie was also a chair for the Greater Naples American Association of University Women (AAUW), served as Board President for the Judson College Board, and served on the National Board of Parliamentarians. She also served on the boards including the University of Illinois President’s Council, the American Seminar Leaders, the League of Women Voters, Sherman Hospital, Women in Business, and United Methodist Church Women. Last but not least, Jackie founded the One Million Voices Against Domestic Violence Campaign for the National Domestic Violence Hotline.

Jackie earned a plethora of accolades throughout her life. Her honors included the AAUW Susan B. Anthony Award, Cosmopolitan Women of the Year, YWCA Leader Luncheon Volunteer Award, and Chicago Magazine Woman of the Year Finalist.

Before her installation as GFWC International President in 2006, Jackie enjoyed an illustrious career as a clubwoman. Jackie served as GFWC Illinois State President from 1992–1994. She also served on the as the President of the GFWC Hollandettes and as a member of the Membership Committee, as Leadership Chairman, President’s Special Project Chairman, Treasurer, Recording Secretary, Second Vice President, First Vice President, and President-elect.

Among her many accomplishments, Jackie was also an accomplished parliamentarian. This past summer at the National Association of Parliamentarians Convention, Jackie completed all requirements to become a Professional Registered Parliamentarian (PRP) which is the highest level one can achieve. She was currently serving on both the GFWC Florida and Illinois Executive Committees (2018-2020) as Parliamentarian.

Jacquelyn Pierce assumed the Presidency in June of 2006 in Denver, Colorado. “Empowering Women One By One” was the theme of her Administration. In her first article for Clubwoman Magazine as President, Jackie observed that:

The 2006–2008 Administration focused on domestic violence awareness and prevention and oversaw a multitude of accomplishments. Under Jackie’s Administration, the Empowering Women (ceased), Public Policy/Legislation Committee (now Legislation/Public Policy Committee), and the Public Relations Committee (now the Communications/Public Relations Committee) were formed. Fifty states reported 9,310 projects completed with 96,657 club members participating, and total volunteer hours of 293,567. Notably, Jackie also oversaw a major renovation of 1734 N Street. Together with local designers and contractors, the downstairs foyer and bathrooms were refurbished and restored. Their beauty is still being enjoyed to this day.

In reflecting on her time as GFWC International Past President, Jackie observed her blessings as a clubwoman, a leader, and a friend. She noted that:

I’ve been blessed to have the opportunity to travel to four continents, six countries, and 39 states during this Administration. Visiting all 50 State Federations before assuming my role as International President was a definite advantage but returning to the grassroots of our membership, being the recipient of your many kindnesses and courtesies, and observing—with awe and admiration—the outstanding commitment of our GFWC club members, has left me with a blessing that I shall always cherish … I have discovered that empowerment cannot be given away without being renewed within oneself. In this, I’ve had the greatest blessing of all, for I have received the empowerment of you, my Federation Friends. I’ve been blessed.

GFWC was indeed very fortunate to call such a woman one of our own.