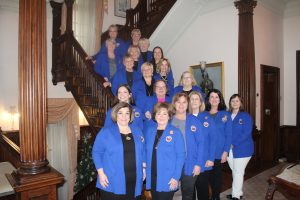 Every year on January 11, members of the General Federation of Women’s Clubs (GFWC), observe “National Human Trafficking Awareness Day” to help raise public awareness nationally on the victims’ plight, mostly women and children. Victims are subjected to a range of threats and hostilities that leave them mentally scarred for life.

Standing in solidarity, the GFWC Executive Committee, Strategic Planning Committee, and the President’s Assistants mark the occasion by wearing blue.

GFWC encourages every club in every state to share your support by posting photos on social media and sharing stories of activities underway during the month of January to spotlight this issue to achieve legislative action at the local, state, and national levels of government. #WearBlueDay #GFWC