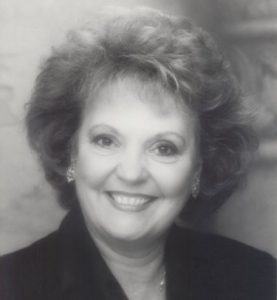 Born in Baltimore, Maryland, Judy attended Johns Hopkins University and eventually taught there before working as a Registered Nurse for more than forty years. Judy became a proud Floridian and Florida was proud of her too! During her presidency, clubwomen from her town created and display a city entrance sign that read: “Clearwater: Home of Judy Lutz, International President of General Federation of Women’s Clubs.”

Judy spoke about GFWC as a formative experience that gave her just as much as she gave it. She wrote: “An article I read recently noted that every journey begins with a single step. I took such a step in 1968, when a bridge buddy asked me to consider attending a GFWC club meeting.” A clubwoman for fifty-one years, Judy “acquired a whole new family by joining a GFWC club.” As GFWC clubwomen often learn, membership benefits range far and wide. In addition to helping her own community, Judy discovered a new community within GFWC.

Her President’s Project was “Count 10 for Kids,” which outlined ten ways to make a difference in children’s lives. The projects, many of which could be completed in a day, focused on making sure children could grow up in an encouraging atmosphere.

Judy was conscious of how she was part of carrying on GFWC’s legacy and worked to do it well: “Each one of my predecessors has been mindful of her obligation to Jennie June’s mission. Every one of us has pulled some threads from Mrs. Croly’s spool of dreams, and together we have woven a great tapestry dedicated to volunteerism and community service.”

At the end of her administration, Judy reflected fondly on the highlights, which included presenting the New York City Fire Department $180,000 used to purchase a fully-equipped ambulance that bore the GFWC emblem! She also organized a “cultural exchange” trip with the Hellenic Federation of Women’s Clubs so that American clubwomen could meet their Grecian counterparts.

Judy beautifully captured how meaningful it was to be part of an organization that focuses on community improvement: “As GFWC members, we have learned many things together. You have taught me that courage, commitment and caring for others is essential and necessary in this world of ours, and that being sensitive to the needs of others give our lives purpose.”

Judy was a caring woman who considered hugging her “specialty” and always responded to “I love you” with “I love you more.” GFWC was fortunate to call such a thoughtful and visionary woman one of its own.