On August 26, 2020, the United States will celebrate the centennial of the passage of the 19th Amendment, which prohibits state and federal governments from denying any citizen the right to vote on the basis of their sex. The motion for women’s suffrage was first submitted to congress in 1878, but its ratification was the culmination of 72 years of formal organizing and the work of thousands of dedicated activists committed to the enfranchisement of women. Although the passage of the 19th amendment granted 26 million American women the right to vote, those protections did not extend to African American, Asian American, Hispanic American or Native American women, among other minority groups. All Americans would not be fully enfranchised until 1965 when the Voting Rights Act was passed; another historic milestone. 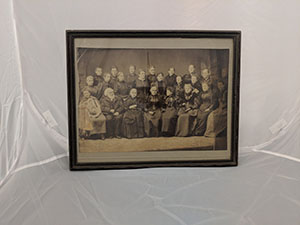 A part of GFWC’s museum collection, this photograph, taken by Matthew Brady in 1894, depicts members of the National American Women Suffrage Association, including founder Susan B.

Since its founding, the General Federation of Women’s Clubs (GFWC) encompassed supporters of suffrage and leaders of the suffrage movement within its ranks. Feminist leaders and clubwomen such as Carrie Chapman Catt, Jane Addams, and Lucy Stone helped to lead both the push for suffrage and numerous causes within GFWC. However, reflective of the national mood and sentiment, GFWC’s support and endorsement of suffrage was gradual and nuanced.

At GFWC’s 11th Biennial Convention in 1912, Mrs. Charles Edson of California proposed passing a GFWC Resolution in support of women’s suffrage. Although the Biennial took place 64 years after Seneca Falls and 22 years after the foundation of the Federation, the resolution was deemed “out of order.” While many clubwomen supported the cause of suffrage, and numerous State Federations had already endorsed the proposed amendment, the Federation as a whole was not ready to publically support the then controversial issue.

When GFWC was founded in 1890, it found it’s footing as a collection of women’s literary clubs and professional organizations. However, marching in beat to the movements of the progressive era, clubwomen quickly began to adopt more civic-minded causes. Clubwomen saw it as their moral imperative and duty to help to support the nation’s children, newly arrived immigrants, literacy, the arts, the environment, and myriad other progressive causes. Within those causes, support for suffrage began to grow.

A year after Mrs. Edson’s proposal, a delegation of clubwomen marched in the massive women’s suffrage parade in Washington D.C. The event proved to be a turning point in the campaign for the vote and helped to evolve sentiment within GFWC itself.

At the 1914 Biennial the resolution to endorse suffrage was again raised. Having evolved with the political climate, many of the clubwomen had altered their understanding of political participation and their roles within society to fit in with what they viewed as their moral duties as wives, mothers, and caretakers. The right to vote gave them a voice over school boards, where and when their children could work, and regulation over home-life. In essence, the right to vote was now understood as an extension of their own club work. With the First World War looming, voting also became an urgent matter of patriotic duty. In an address to the clubwomen during the 1914 Biennial in Chicago, Carrie Chapman Catt professed the moral and patriotic duty of women and the vote with dramatic flair:

“If we are ever to come to an end in this country, it will not be through any war with Mexico, nor any possible war with Japan, our danger lies within. The patriot is he who tried to find the enemy, who tried to conquer him before he has gained control over our hand, so it is not a question of right for the women of our land to have the vote, it is a question of duty, it is a question of patriotism, it is a question of women attending to the duties of their motherhood … I know there are still women among us so medieval in spirit that they could still give their own sons and believe they are doing their highest patriotic duty … but I say, it is a greater duty, a greater service to this country for you to go to the polls and to put your little vote within the ballot box when it stands for the abolition of child labor.”

On the morning of June 13, 1914, GFWC passed a resolution endorsing “political equality of men and women” and the right of women to vote, which was greeted by abundant cheering and only 12 “nays.”

What Can You Do to Celebrate?

Through 2020, museums, schools, women’s clubs, and historical groups will be doing much to celebrate the centennial of the 19th Amendment to ensure that the story of the fight for suffrage is told. GFWC will be celebrating the centennial through June of 2020 with our Seven Grand Initiative project. Clubs throughout the Federation are asked to plan 1,000 community service projects in honor of the centennial by August 26, 2020.

Volunteer
It’s what we do best. WVCI will aid you in finding volunteer opportunities centered on the centennial celebration in your area.

Get Educated
If you’re looking to learn more about the passage of the 19th Amendment and the women and movement that accomplished it, there are lots of great resources to help you learn and teach.

What is your club doing to celebrate the centennial? Capture your club’s centennial celebration and activities on camera and send them with a 1–2-paragraph description to pr@gfwc.org for a chance to be featured on GFWC’s blog! 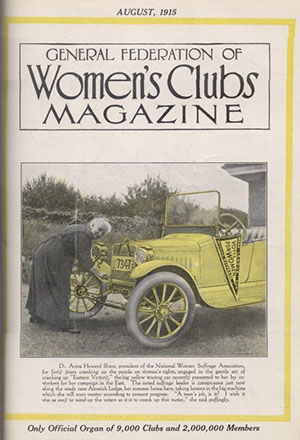 After GFWC’s 1914 endorsement of suffrage, GFWC’s publications regularly followed the progress of the movement and the proposed amendment. Featured in this 1915 issue of the General Federation of Women’s Clubs Magazine is Dr. Anna Howard Shaw, president of the National Woman Suffrage Association, and her work towards enfranchisement.

Subscribe to WHRC News
Create a GFWC account and select the options under Communications Preferences to receive WHRC News. Have a personal profile already? Check that the “Do Not Email” option is not checked and that the “WHRC News” is checked.