Throughout Volunteers in Action Week from April 17-23, GFWC has been proud to recognize the Federation’s long and inspirational history, filled with stories of women who make a positive impact in their communities and around the world every day through volunteer service. Through these efforts, GFWC clubs often form long-term partnerships and work with various local organizations to develop projects with a lasting impact. In recognition of Volunteers in Action Week and Federation Day on April 24, the 132nd anniversary of the organization’s founding, GFWC celebrated these projects and the volunteer spirit of clubwomen everywhere with a special three-part blog series. Although this is the last part of our special Volunteers in Action Week series, we will continue to shine a light on our wonderful volunteers and their tireless efforts each week in the GFWC Blog. 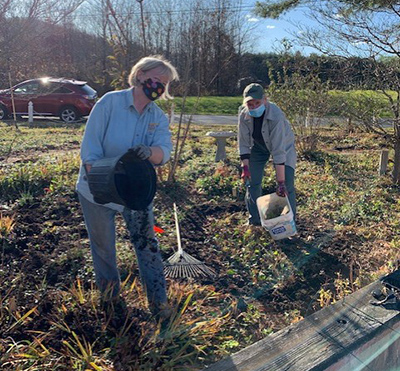 For more than 25 years, clubwomen with the Bent Mountain Woman’s Club (Virginia) have maintained and cared for a community butterfly garden. In 1994, the garden was started on the grounds of the Bent Mountain Elementary School and was used as an educational tool for many years. Although the school eventually closed in 2010, clubwomen continue to keep up the garden every year and it remains a gathering place for neighbors and friends of all ages.

Clubwoman Roberta Johnson explained when she was a teacher at the elementary school she was able to help start the butterfly garden, and after joining the woman’s club a year later, was excited to introduce her fellow members to the garden.

“They immediately embraced the project and we started working in the garden with the children,” she said.

Laura Reichenbaugh, the club’s Environment Chairman, said many people outside the club volunteer to help at the butterfly garden as well and that it has been used for educational programs by the local library. She added there are informational cards about the different plants throughout the garden for visitors to read as well.

“There are a lot of learning opportunities,” she said.

For years, the butterfly garden has been a space for people to gather and to host special events and other fun activities.

“The butterfly garden is part of our identity,” Roberta said. 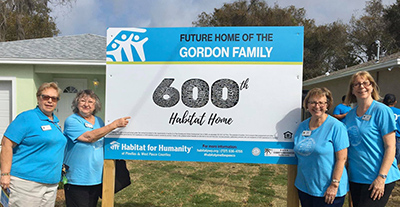 Since forming a partnership with Habitat for Humanity in 2017, the GFWC North Pinellas Woman’s Club (Florida) has donated hundreds of books to children in their community through their Book Fairy Project. In 2018, they were joined by GFWC St. Petersburg Junior Woman’s Club (Florida) and were able to provide even more families in Pinellas County with new and gently-used books.

Debbie Struk, GFWC North Pinellas Woman’s Club’s Book Fairy, said although many organizations support the efforts of Habitat for Humanity, their club was one of the first to provide something specifically to the kids of the families. For clubwomen, this was a great opportunity not only bring a smile to a child’s face, but to continue with their goal to help improve literacy rates in the county.

Using information provided by Habitat for Humanity, Debbie said they try to curate each book to match the children’s ages and interests when possible. Both clubs provide books that feature diverse families and characters.

“We try really hard to give them at least two to three books that they are really interested in,” Debbie said. “We want the kids to see themselves in these books.”

Shannon Bailey, with the GFWC St. Petersburg Junior Woman’s Club and GFWC Leadership Committee Chairman, said her club wanted to get involved with the project to help encourage a love of reading in kids.

“Children with books at home perform so much better in school and literacy rates are better,” she said.

Shannon added this is a project that doesn’t take too much time for members, but has a big impact.

GFWC North Pinellas Woman’s Club President Lisa Klatt said having long-term partnerships with organizations like Habitat for Humanity is great for the club and community.

“We at GFWC always want to be good partners in our community and help out where things have been left behind,” she said.