Members of the GFWC Glendale Woman’s Club (Arizona) have been working hard in their community to ensure kids of all ages have the basic life skills they need to be successful. Club President Cheryl Kappes explained the club has offered a Sewing Basics 101 class to local students during the summer for the past few years, but the class was always limited in the number of teachers and sewing machines available. However, after attending the 2021 GFWC Annual Convention, the club was challenged to “amp it up.” Cheryl said the clubwomen determined that to offer more classes to the community, they would need more teachers and equipment, so they reached out to local schools and successfully recruited volunteers and received several donated sewing machines. Some members also contributed funds for additional machines. In total, the sewing class in 2022 tripled in size from eight to 24 students.

“It was very exciting to see it all come together,” Cheryl said.

One of the club’s goals was to make the class affordable so that it would be accessible to more area residents. Cheryl said for only $20 the children were able to learn a skill that they could carry with them for years to come.

“This basic sewing class gives them some life skills that are no longer offered at public schools,” she said. 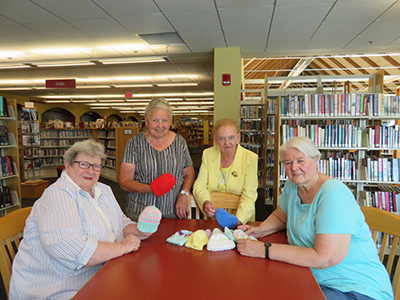 GFWC Windsor Woman’s Club (Connecticut) members donated about 50 handknit baby hats to a hospital for Ukrainian refugees. Clubwoman Maureen Andryuk explained that the club has a longstanding committee that knits baby hats for area hospitals, but due to the COVID-19 pandemic, they have been unable to donate the hats and had a couple hundred waiting to go to those in need. Earlier this year, clubwomen learned that one member’s daughter, who works out of Germany to provide international relief, was able to take many of the hats with her to distribute as part of the relief efforts. The hats were sent to a school in Warsaw, Poland, that has been collecting supplies for Ukrainian refugees who have been impacted by the ongoing war crisis in their country. The school then provided the hats to a hospital for distribution.

“We were all shocked by what is happening in Ukraine, and we felt so much sympathy for the people fleeing–pregnant women, families, and others,” Maureen said. “We wanted to show our support.”

In addition to the hats, members also provided a monetary donation for diapers and wipes.