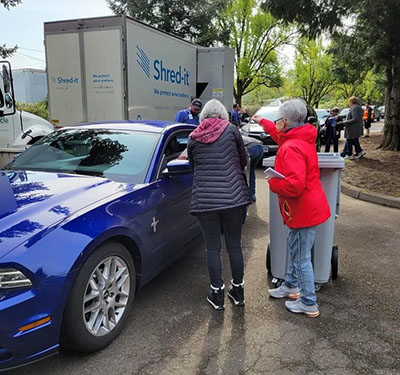 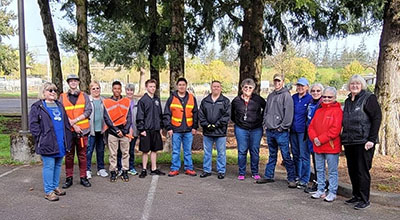 In an effort to keep paper out of landfills and to help people protect their identity, the GFWC Oregon City Woman’s Club hosted a paper shredding event in their community in April. Club Vice President Chris Wadsworth explained the club rented shred trucks and invited area residents to bring their old tax forms, receipts, and any other documents they had to shred to the event site. In total, Chris said there were about 160 cars, with three boxes allowed per vehicle, and they filled up two shred trucks.

“This event was really well attended,” she said.

As a retiree from the Oregon City Police Department, Chris said the department used to host paper shredding events for the community, but they haven’t in recent years, so the clubwomen decided to take up the mantle.

Along with shredding events being a great way for people to safely dispose of documents containing personal information, the shredded paper can also be compacted and recycled rather than ending up in landfills.

While this was the first shredding event hosted by the club, Chris said members would like to organize another in the future.

The funds raised throughout the event will be donated to various community service organizations. 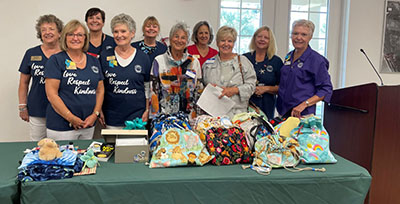 Members of GFWC Rotonda West Woman’s Club (Florida) formed a partnership with the Florida Guardian ad Litem Foundation with the 20th Judicial Circuit Court to provide children entering the foster care system with a bit of comfort. Club President Kathryn Gallagher explained members hand-sewed bags and filled them with various items to be donated to the children in need. This project began as an idea in an email from the Child Advocate Manager Supervisor of the Charlotte County Florida Guardian ad Litem Foundation but has come to fruition and will continue on a quarterly basis.

“The whole club is excited about this project,” Kathryn said, adding that it was originally postponed due to COVID-19, but the first set of bags has now been delivered to the children.

She said that clubwomen wanted to participate in this project because children entering the foster care system are often taken from their current environment with only a black trash bag to contain their limited possessions. Therefore, members felt it was important for these children to have something unique to them that they could be proud of carrying.

“It helps them to realize that they have value,” she said.

Although created as a Civic Engagement and Outreach Community Service Project, each committee in the club has participated in filling the bags by donating age-appropriate books, pajamas, toothbrushes and other personal hygiene items, hand-knitted and -crotched washcloths, comfort toys, and more, and by making handmade birthday cards.