GFWC Woman’s League of the Lowcountry 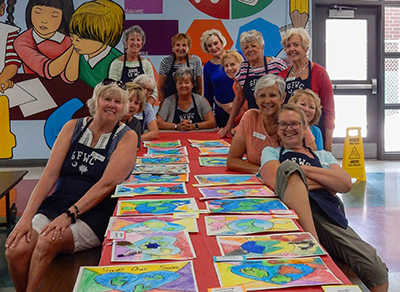 GFWC Woman’s League of the Lowcountry (South Carolina) members organized an art project activity for local third, fourth, and fifth graders involved in the Boys and Girls Club as well as the after-school program at the Ridgeland Elementary School. Clubwoman Sandy Iams explained the club decided to organize this art project since the school had to remove its art program from the curriculum due to budget cuts.

“We were very excited to do this project,” she said. “It’s a creative project and it gives kids and outlet and offers them an opportunity they may not have at home.”

The theme of the art project was Environmental Ecology/Celebrating Earth Day – Reduce, Reuse, Recycle, and the children used watercolor paints to make posters inspired by this theme. Sandy said the members provided all the materials for the project and helped the approximately 40 children in attendance bring their creations to life. She added the club has been planning this project for more than a year, but had to postpone it due to COVID-19.

With arts programs frequently being one of the first cut at schools due to financial concerns, Sandy said the members are all dedicated to helping children have access to projects and activities that allow them to be creative.

“There are many children who really flourish in these programs,” she said. 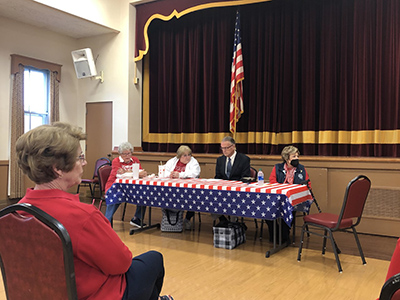 A local city council member attended a GFWC Federation Day celebration, during which donations were collected for the Louis A Johnson VA Medical Center.

Members of the GFWC North Central Junior Alumnae Club (West Virginia) and GFWC Woman’s Club of Bridgeport (West Virginia) combined their efforts to give back to veterans in their community in celebration of Federation Day.

Tressa Wolfe, Second Vice President of the GFWC North Central Junior Alumnae Club, explained the clubs reached out to a local Veterans’ Affairs medical center about how they could help and were provided with a list of items that were needed for the veterans at the center. Newsletters were then sent out to the clubwomen with the wish list items, and they were encouraged to bring their donations to the Federation Day event.

Tressa said members donated more than $780 worth of new tennis shoes, T-shirts, underwear, socks, slippers, and snacks to the Louis A Johnson VA Medical Center. Along with these items, clubwomen also made handmade notes for the veterans.

“Our ladies were so generous,” she said.

In addition to this collection, Tressa said the clubs work with the medical center throughout the year, providing items such as Valentine’s Day cards, snacks, and more.

“They have given us our freedom and we want to honor them and do what we can for those who are in the hospital,” she said.