Several years ago, the Women’s Club of Farmingdale (New York) created an Ambassador Fundraising Program to raise funds for International and Global Issues inspired by their parent organization, The General Federation of Women’s Clubs, Inc. in Washington, D.C. The Ambassador Program consists of monthly lunches at local restaurants chaired by a rotating schedule of members. In the past, funds raised have been used to support a member’s daughter who is involved in building schools in Uganda in remote areas and, in addition to education, the schools promote healthy exercise for a healthy mind.

Currently, the Ambassador Program sponsored “Speak Up for the Poor,” whose mission it is to transform the world on behalf of the poor, especially creating a new reality for girls in poverty. By building an international network of people and organizations that run Girls’ Education Programs, Safe Homes for girls and Justice programs to investigate and defend human rights abuses, they have rescued girls born into brothels, rescued girls from sex trafficking and rescued girls from exploitation and abuse. They have helped and encouraged these girls to stay in school, find a path to success and inspired them to live up to their fullest potential. Unfortunately, hundreds of girls remain on their waiting list. 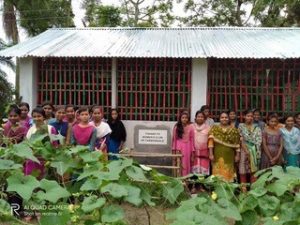 With the club’s $1,500 donation, Speak Up for the Poor was able to build and dedicate a beautiful Learning Center wing and purchase four bicycles for the girls to use as transportation. For more information, please go to: www.speakupforthepoor.org.

The Domestic Violence Committee of the GFWC Woman’s League of the Lowcountry (South Carolina) assembled and delivered comfort kits to Hopeful Horizons in May. Hopeful Horizons is a children’s advocacy, domestic abuse and rape crisis center, providing safety, hope and healing to survivors. This nonprofit center serves four Lowcountry counties. The kits will be used by the therapists working with the children. Each kit contained educational workbooks, a journal, colored pencils, crayons, playdoh, and a fidget toy as well as a weighted blanket to offer comfort and security during the interview process.

In addition to the kits CCI Hearing Dog Huxley presented CCI Hopeful Horizon Dog Adobe with a $100.00 gift card.This project by the Domestic Violence Committee was made possible by a $1,000 grant from S.C.F.W.C Progress Foundation. 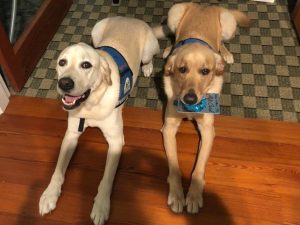 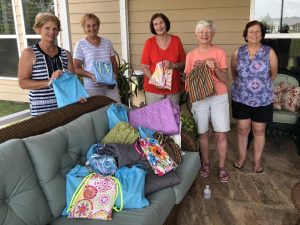