One of the Seven Grand Initiatives was to plant 1,000 trees for Arbor Day, and clubs took it to heart, planting trees across the country. Here are just a few of the clubs who celebrated.

Being from Nebraska, the Seward GFWC has celebrated Arbor Day since the beginnings! They are proud to know that clubs across the country were celebrating this year too thanks to the Seven Grand Initiatives. This year, Seward GFWC joined forces with Concordia University to celebrate their 125th birthday by planting two trees. One was dedicated to the GFWC club and the second was in recognition of Concordia’s milestone. Both trees were donated by Sinclair Hille Architects of Lincoln Nebraska, who just completed a new building on Concordia’s campus.

Every year, their Arbor Day celebration includes the fourth grade classes from Seward’s public elementary school as well as St. John’s Lutheran and St. Vincent de Paul’s Catholic school’s; each class does a presentation in honor of Arbor Day. The festivities were started with a Proclamation by Seward’s Mayor, Joshua Eickmeier. Two separate trees were donated by an individual to the Seward GFWC and were planted on Arbor Day at the Seward Civic Center where the club meets. The Civic Center was built in 1955 after Jessie Langworthy passed and donated the land and money for a structure to be built to host non-profit organizations at no cost. Mrs. Langworthy’s mother-in-law was an early member of their town’s GFWC club. 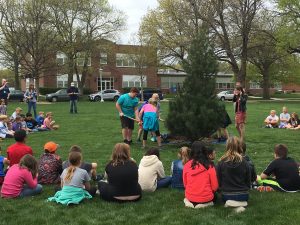 For Arbor Day, the GFWC Dillsburg Woman’s Club (Pennsylvania) voted to plant a small tree in Quay Park, which the club owns. Since it is a beautiful but narrow park on the main street, they needed to plant a tree that would stay somewhat small. Thus, after speaking to one of the horticulturists, they decided on the pinky winky hydrangea tree that blooms as white flowers in mid-summer and changes into purplish pink flowers in late summer and fall. 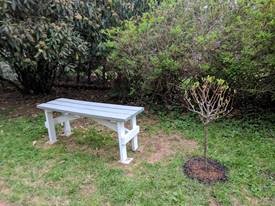 The GFWC Woman’s Club of the Denville-Rockaway (New Jersey) joined in the festivities when the town held a’ bridge’ dedication at a local park for one of the club’s past members, Peggy Gray. She was an active volunteer in the town and the club was able to get a tree donated in her memory and planted by the bridge. 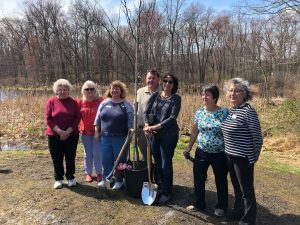 Pictured with members is the Mayor of Denville, Tom Andes.

The Sorosis Club of Lamar (Colorado) worked along side the tree board and their local 5th graders to help plant 30 trees at local ball parks. Four members were able to help the 5th graders plant trees and nine members provided 12 doz. cookies and 12 doz. bottled waters to the 105 students and adults. Everyone had a great time! 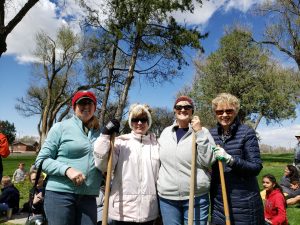 Many clubs brought together Arbor Day and Federation Day to make their mark and celebrate in a big way. One such club was the GFWC Temple Terrace Woman’s Club (Florida), who planted 2 red maple trees to celebrate GFWC’s history. 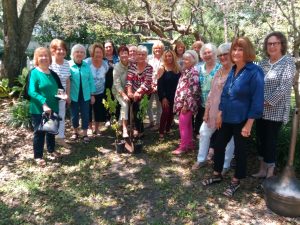 Another club who combined the celebrations was the GFWC South San Francisco Women’s Club (California). They purchased a valley oak tree that they planted at Orange Memorial Park, a local sculpture garden. A plaque indicating the type of tree, location, date of donation, and an inscription indicating it was donated by the South San Francisco Women’s Club will be posted in their SSF Municipal Services Building for the public to see. 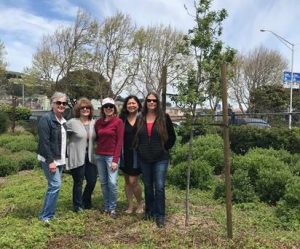 The Women’s League of Mt. Holly (New Jersey) celebrated Arbor Day with a tribute to two of their members. Club president Joelle Wentz conducted a ceremony to honor Mardella Woolston for 63 years and Carol Kovacs for 48 years of loyalty, generous spirits, and loving hearts. Both were presented with a certificate and became lifetime Honorary Members as they touched candles to represent the circle of light that guided their footsteps for all those years. To celebrate Arbor Day, the club purchased two books on trees and donated them to the very school Mardella retired from so many years ago. The school was delighted and asked her to read a book to the children. One of the books donated is a true story about teacher, Kate Sessions, who moved to San Diego in 1883 and began planting trees in that dry, arid terrain and how she changed the city forever. The Tree Lady by H. Joseph Hopkins was the perfect example of the strength and tenacity their two honorees have shown over a combined total of 111 years. 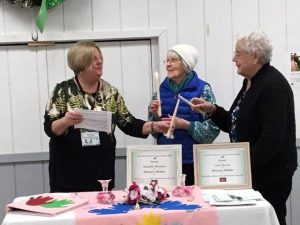 And last but not least, Midge Tucker, a member of the GFWC Ludlow-Okemo Valley Woman’s Club (Vermont), showed that just one person can make a difference. She doesn’t just plant trees for Arbor Day! Midge has a lot of evergreens in her yard, and while weeding the gardens she comes across tiny inch-high seedling trees. She pulls them up and plants them in little pots, sometimes weaving two or more together for strength. The stems are sometimes as thin as a piece of thread, but will grow rapidly when put together. Some of her successes have found their way to other areas of town, usually when they reach at least a foot high and can survive transplanting into strange soil. She wants to spread the love through trees and you can too!