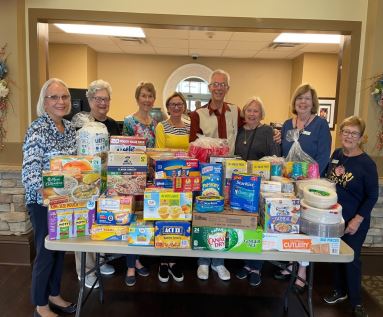 The GFWC Brunswick Woman’s Club (Georgia) participated in the GFWC Georgia Day of Service in April with their “Pack the Pantry” project at Nunnally House in Brunswick, Georgia, and by donating to Ronald McDonald House Charities. Located adjacent to the Southeast Georgia Health System (SGHS) Brunswick Campus, the Nunnally House offers rooms for cancer patients receiving treatment, families of critical care patients, medical students, and on-call staff. Clubwoman and Public Relations Chair Patricia Porto explained that members donated various nonperishable food items as well as plastic silverware and heavy-duty paper plates and bowls to the organization. In total, more than $450 worth of items were donated.

“This facility is just amazing to our community,” Patricia said. “It is so important to us.”

Eight clubwomen delivered the donations to the Nunnally House and were greeted by SGHS Foundation Development Coordinator Bryan Thompson, who offered them a tour of the expansive facility.

Patricia said the members all believe it is important to donate to and support this organization because of the great work they do to offer physical and emotional support to those in need in the community.

“We have done this several years in a row and it is so rewarding to know their needs are met,” she said. 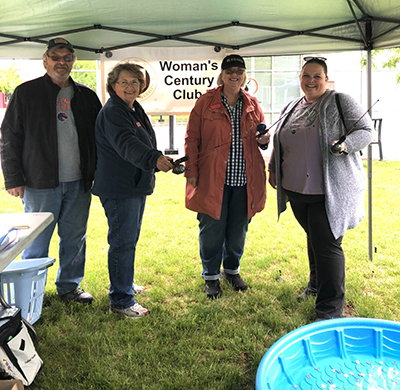 Members of the GFWC Nampa Woman’s Century Club (Idaho) helped kick-off the Nampa Public Library’s summer reading program on a rainy Saturday in June. GFWC Idaho State President and member of the GFWC Nampa Woman’s Century Club Cindy Biesemeyer said the members were excited to participate in the event organized by the library because they have always supported the many programs offered by the library.

“When we started in the 1900s, libraries were one of the things we brought to the community and we have supported them all this time,” she said.

Clubwomen set up a tent with a “fishing pool” filled with specially minted Lincoln pennies worth 33 cents apiece that children could fish for as part of their “Wonders of the Ocean” theme. During the activity, the kids learned about not only collecting coins, but also about several of the planet’s oceans. Each of the pennies the children caught were “mounted” on a fact sheet and then given to them to keep. Parents and guardians in attendance were also given club brochures and had an opportunity to learn about GFWC.

Cindy said several other community vendors and organizations were set up at the event as well, and the members were able to visit with them and share information and answer questions about the club.