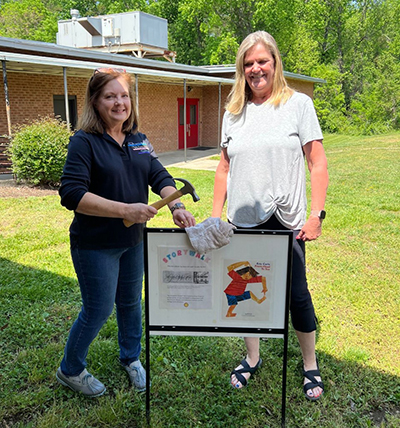 The GFWC Greensboro Woman’s Club (North Carolina) initiated a portable StoryWalk project in March to give area kids an opportunity to get active and begin to foster a love of reading. Project Chair Janet Veltri explained the Story Walk was created by deconstructing a children’s book, laminating the pages, and posting them on signs that could be moved as necessary. Since its creation, the StoryWalk has been set up at three libraries, four elementary schools, and six local parks or gardens, and will be used in a city playground for a summer recreation and nutrition program in the coming weeks. The project committee has been helping with the relocation and upkeep of the StoryWalk signs throughout the spring and summer.

The club’s Education and Libraries Community Service Program Committee chose to use From Head to Toe by Eric Carle for the StoryWalk because it allowed for an interactive experience. The book features pictures of animals and prompts its reader to imitate the animals with movements such as turning their head like a penguin, raising their shoulders like a buffalo, clapping like a seal, licking like a donkey, and bending like a camel.

Janet said the clubwomen were all excited to organize this project and to give children and their families and friends a chance to enjoy books together.

“I am a strong believer that the earlier you introduce children to reading, the more they will do it throughout their lives,” she said.

The StoryWalk® Project was originally created by Anne Ferguson of Montpelier, Vermont, in collaboration with the Kellogg-Hubbard Library. 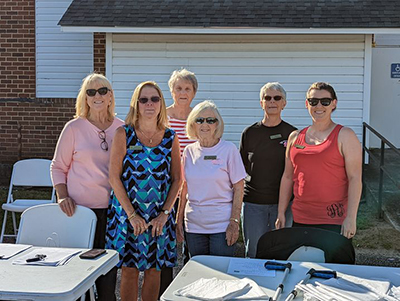 Cochran Woman’s Club (Georgia) members are committed to taking care of the environment and keeping their community clean. Club President Daphne Jones said the club volunteered to assist with Clean-Up Day, an event sponsored by the city of Cochran and the Cochran-Bleckley County Chamber of Commerce in April. Once members registered participants, they handed out plastic bags, gloves, and face masks to all participants and sponsored a lunch break.

Daphne explained that although it is difficult physically for many of the members to participate directly in trash pick-up events, cleaning up the environment is still important to them, and they wanted to help with this event however they could. After speaking with the city manager in charge of the event, the members were on board.

“We like to do whatever we can in the community to help out,” Daphne said, adding the clean-up event was a success with many area residents and local college students helping.

In addition to volunteering for this event, Daphne said members organize many other recycling projects, such as collecting plastic bags and newspapers.