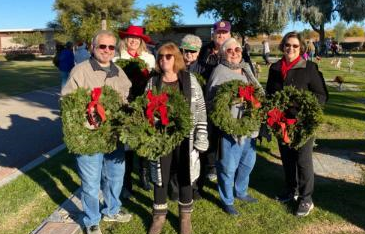 The GFWC Las Noches Woman’s Club (Arizona) donated 30 wreaths to Wreaths Across America and participated in the Laying of the Wreaths at Valley of the Sun Veterans Cemetery in Chandler, Arizona, on December 18. Celene Post, Civic Engagement and Outreach Community Service Program Chairman, said as someone who has several family members who have served or are currently serving in the military, participating in this project was very important to her.

“Wreaths Across America is near and dear to me,” she said. “I think we should do whatever we can do to remember veterans.”

Celene explained the club has been contributing to this organization for the past several years, but this was their first opportunity to attend a Laying of the Wreaths ceremony. This was the most wreaths that the club has been able to provide so far. She said six clubwomen and three booster members attended the event.

The members of the GFWC Las Noches Woman’s Club wanted to participate in the ceremony because they feel it is important to recognize the sacrifice these men and women have made for the United States, Celene said.

She added the ceremony can be a great learning opportunity for children and families in attendance. 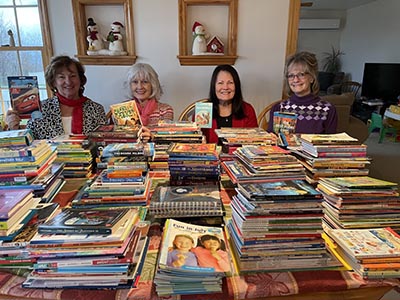 Members of GFWC West Side (Pennsylvania) collected 485 new and gently used books during their “Nourishing Bodies and Minds” book drive. These books were distributed to kids through the Dinners for Kids program in December. This program was founded in 2011 by the owners of Ollie’s restaurant, in Edwardsville, Pennsylvania, with the goal of fighting childhood hunger with healthy meals.

Deidre Kaminski, Education and Libraries Community Service Program Chairman, said the clubwomen wanted to support Dinners for Kids and provide the children with books because both proper nutrition and access to books are vital to a child’s education.

“There are a lot of at-risk children who fall under the cracks,” she said. “I don’t want kids to be hungry and reading is so important.”

In addition to donating books to the program, clubwomen raised money through a community Christmas tree decorating contest hosted at the local Grotto Pizza.

Deidre said members made book and healthy food inspired ornaments to fit their “Nourishing Bodies and Minds” theme, which they used to decorate their Christmas tree.

GFWC West Side’s tree came in fourth place out of 28 trees in the Parade of Trees contest and raised $3,401 through public voting and member contributions. All of the proceeds went to the Dinners for Kids program.