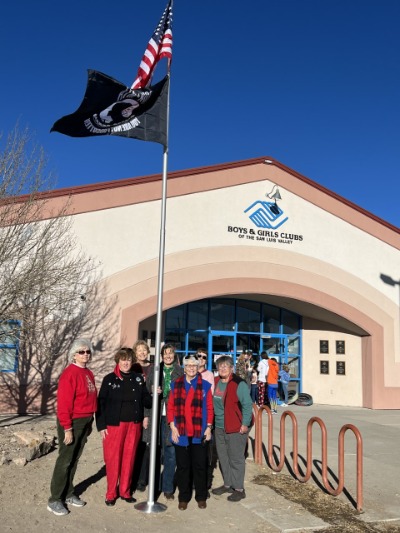 When members of the GFWC Woman’s Citizenship Club of Alamosa (Colorado) learned the Boys & Girls Club in Alamosa, Colorado, did not have a flagpole, they asked the members of the American Legion, Dickey-Springer Post 113, to help. After talking to the director of the Boys & Girls Club, the Woman’s Citizenship Club of Alamosa purchased a flagpole and the American Legion prepared the site and set the pole.

On Friday, December 17, the new flagpole, with the United States flag and the POW/MIA flag, was dedicated with a ceremony held at the Boys & Girls Club. The opening ceremony began with the introduction of the mayor, city council members, and county commissioners. A welcome and opening statement was made by the director of the Boys & Girls Club, as well as Club President Helen Taylor, who commented that, “this was a true collaborative effort between the club members, American Legion, and the Boys & Girls Club.”

The commander of the American Legion led the dedication ceremony and shared some of his thoughts on patriotism. Several Legion members shared what the flag means to them and the importance of honoring the flag. With the help of two young girls, a demonstration on how to fold the flag was given. Then they were asked to help place the flags on the pole and the legionnaires raised the pole to the sound of To the Colors by bugler. The Legion Commander led those in attendance in the Pledge of Allegiance.

GFWC Colorado Membership Chairman Theresa Rudder said the clubwomen felt it was important to not only donate a flagpole, but to help host this ceremony for children so that they could learn about the important of patriotism and flag etiquette.

“Men and women have given their lives for the freedom we have and the flag represents that freedom,” Theresa said.

After the ceremony was concluded, everyone in attendance was invited inside for cookies and hot chocolate, prepared by members of the GFWC Woman’s Citizenship Club of Alamosa.

Parliamentarian Celeste Kappel said their first event was a “Thankful Thursday” get together. Celeste explained for the past four years the club has been hosting this event as a way to help the area food pantry. To participate, clubwomen shop for and bring at least $10 worth of food items to be donated. This year, Celeste said the food pantry requested more paper products, so along with non-perishable food, members also donated various paper goods.

In total, the club collected more than $1,000 worth of groceries and paper goods to donate.

Celeste said the clubwomen always enjoy being able to give back to the food pantry, and they also frequently volunteer their time there on Tuesdays and Thursdays to help in any way they can.

“We want to help people who, especially at this time, are in need of food, diapers, and paper goods,” she said.

Celeste explained among the many organizations they support, they frequently give the funds from this event to local schools, the food pantry, a teen center, and more.

“We are very fortunate that our members are so generous,” she said.