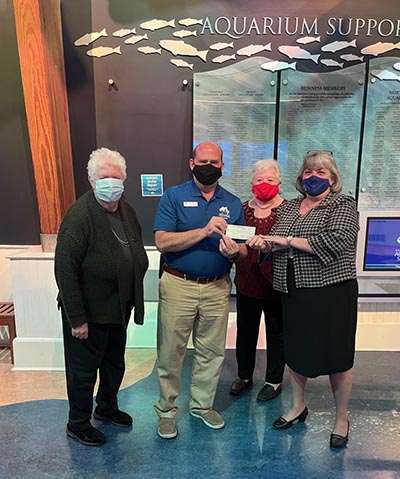 GFWC North Carolina District Nine recently made a several hundred dollar donation to the Sea Turtle Assistance & Rehabilitation (STAR) Project at the North Carolina Aquarium Roanoke Island. The sea turtles that are brought to the facility have been tangled in nets, stunned by the cold waters, or even hit by boats, and have severe injuries that need to be healed.

“We wanted to do whatever we could do to help save these beautiful sea turtles,” said District President Donna Harrell. “STAR does wonderful things to rehabilitate these turtles that are found injured or sick.”

Donna said in addition to making the donation, clubwomen were able to take a tour of the aquarium facility and meet some of the sea turtles that were being rehabilitated.

Along with raising funds to help this program, clubwomen do their part to keep marine wildlife save by hosting plastic bag collections to prevent them from ending up in landfills or waterways.

The plastic bags are then donated to the NexTrex Recycling Challenge, a program that allows people to recycle plastic items that are not permitted in curbside recycling, such as plastic grocery bags, newspaper bags, case plastic wrap, bubble wrap, and more. After a certain amount is collected, participants receive a bench from NexTrex. Donna said the club has collected enough plastic to receive three benches, which they have placed around the community at parks and near libraries. 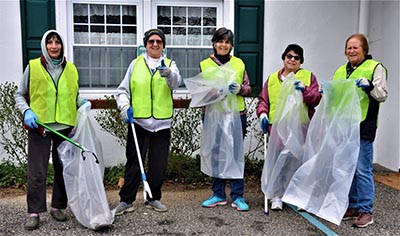 Despite rainy weather, members of the GFWC Millville Woman’s Club (New Jersey) gathered to pick up trash around their neighborhood in March. Clubwoman Nancy Hammond explained the event was part of the Cumberland County Annual Public Lands Cleanup Trash Hunt. Although they did not participate last year due to COVID-19, Nancy said clubwomen have joined in on the trash hunt several times in previous years.

“It’s a matter of trying to keep our neighborhood clean,” she said.

Nancy said six members were able to attend this year’s cleanup event, and they all donned gloves, bags, and extendable grabbers to fill bags with trash that had been left behind, including coffee or soda cups, plastic sandwich bags, cigarettes, and more. In total, the clubwoman collected about five large trash bags full of discarded items.

“So many things we pick up are not biodegradable, like cigarette butts or plastic,” Nancy said. “People throw these things out and they go into our drains. We need to protect our planet.”

She added along with this event, the clubwoman always try to do their part to keep their neighborhood clean and safe.