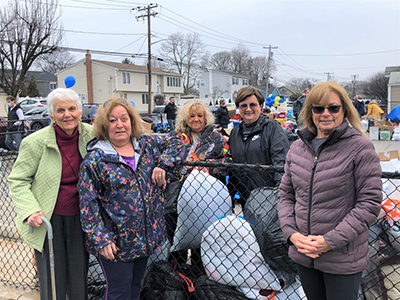 During a recent meeting, members of the GFWC Women’s Club of Farmingdale (New York) voiced their concern for the people of Ukraine in light of the ongoing war crisis. After brainstorming how they could help refugees who were forced to leave their homes, clubwomen set up a committee to collect monetary donations and gently-used clothing for donation. The donations were then delivered to the Holy Family Ukrainian Catholic Church in Lindenhurst, New York, which was holding a donation drive for refugees.

Publicity Chairman Maria Ortolani explained the donations were all sorted by volunteers at the church and then sent to Chicago, where they were then put on cargo planes to be shipped to Poland.

“It all fell into place very easily, which was fortunate,” Maria said. “There was a ton of community support as well to donate items.”

Maria said clubwomen were eager to help with this donation drive after seeing what the Ukrainian people have experienced in the news. She added when members dropped off the donations at the Holy Family Ukrainian Catholic Church they purchased plastic tarps to keep all of the items safe from the rain and assisted the volunteers with the church however they could.

“It was amazing to see the number of people stopping by and the amount of supplies donated,” Maria said. 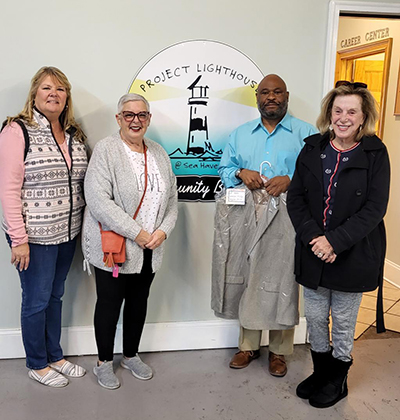 The North Myrtle Beach Women’s Club (South Carolina) recently invited a speaker from Sea Haven, a nonprofit organization that provides emergency and long-term services to at-risk youth, to discuss their Project Lighthouse program during one of their meetings. This program is designed to help people ages 18 to 24 successfully navigate their transition to independence and stability. During this meeting, clubwomen learned that often many of these individuals to do not have the proper attire to go out on job interviews.

After learning this, two new club members jumped into action to organize a Dress for Success drive to meet this need. Second Vice President Connie Lawson said clubwomen were encouraged to do some early spring cleaning and go through their wardrobes for clothing that they could donate.

“Anything our club can do to help them in the process of finding a job is great,” she said.

In addition to club members, many others from the community donated clothing to the Dress for Success drive. In total, approximately 300 items were collected, including suits, shirts, pant suits, dresses, shoes, and more.

Connie noted all of the clothing items were dry-cleaned and sorted before they were delivered.

“The young people were so excited and extremely grateful,” she said. “…To have a part in that is a good feeling for all of us.”