It’s a long-standing tradition for the GFWC Oregon City Woman’s Club (Oregon) to place their club flower, the carnation, at the graves of 27 of their past presidents in Mt. View Cemetery. It goes as far back as Jennie B. Harding, president from 1904-1906. The event is a great way to honor the club’s rich history and the women who have carried on its legacy through the years.

The club also recently donated 36 children’s quilts and 57 stuffed animals to the Children’s Center to bring hope and healing to children and families. Following a child’s assessment at the center, they get to choose one stuffed animal and one quilt to take home.

GFWC Woman’s Club of Tarpon Springs (Florida) was awarded the Non-profit Business of the Year award at the Chamber of Commerce event in their community last week. Professionals who attended the event were amazed by both their philanthropic history and the longevity of their club which began in 1892. 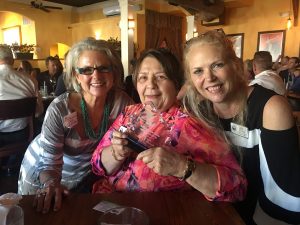 Board members who accepted the award (from left to right):
Dolly Vatikiotis, Barbara Michelin and president Dee Isguzar.

GFWC West Side Women’s Club (Pennsylvania) recently served a meal at St. Vincent De Paul Soup Kitchen, which serves the community by helping the homeless and those in need. They provide hot meals daily and have a clothing room and food bank. 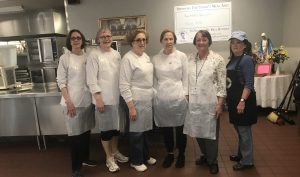 The Women’s Civic League (Utah) recently donated all occasion cards to Our House Assisted Living for residents to use. When the cards were delivered, several residents selected some of the cards for immediate use!