Challenge accepted! Tennessee members were listening when newly-installed GFWC President Mary Ellen Brock rolled out the Grand Initiatives at the GFWC Convention in St. Louis. Incoming Tennessee President, Beth Smith, suddenly received a text: “Hey girl, did you know that Soles4Souls is headquartered in Nashville?” That’s all it took to get the shoe storm started!

Smith reached out to Megan Welsh, Community Partnership Specialist with Soles4Souls, and invited her to attend GFWC of Tennessee’s Summer Board Training where Megan would introduce Soles4Souls to more than 70 clubwomen. President Smith challenged the members to participate in Tennessee’s Every Member Matters campaign to collect 1,241 pairs, one for every Tennessee clubwoman; the response was: “We’re in it to win it!” But that goal was too small and the members knocked it out in a month! GFWC of Tennessee agreed to participate in Soles4Souls’ 25,000-pair challenge in one year’s time. 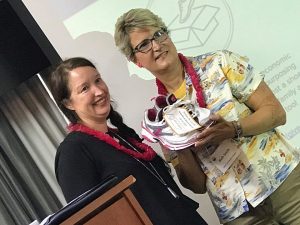 From September 2018 to September 2019 Tennessee will collect shoes to exceed their goal, and as a bonus, Soles4Souls will give 2 members a trip to distribute shoes in Central America. The chosen members will be selected from those participating in the state’s project.

At Tennessee’s Fall Conference, held at a Nashville area state park, attendees were told they could bring shoes and local members would get them delivered to Soles4Souls processing center. Ask and they shall deliver! 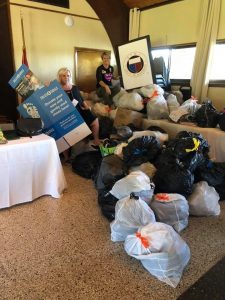 President Smith, sitting on top of the shoe mountain,
and Director of Junior Clubs, Kendra Walker Patty,
standing next to over 3,000 pairs of shoes.

Trucks and vans of members and some husbands delivered the Fall Conference donations to the Soles4Souls processing center a few weeks later. Members also got to tour the facility and meet Megan’s coworkers.

Tennessee clubwomen in pink (Smith’s color) outside
Soles4Souls processing center in Nashville. On the right, Megan in navy
sitting in a box full of shoes.

Tennessee rocketed off and by the end of 2018, an email update from Megan to President Smith said, “Hi Beth- You are almost at 9,000 pairs of shoes! SO AMAZING for only five months.”  (September to December.) Shoe collection projects take center stage in Tennessee’s districts too. District 1, located in East Tennessee, worked with Megan who will be driving from Nashville to pick up over 3,000 shoes during the District 1 Spring Meeting.

In April, the GFWC of Tennessee Spring Convention will surprise members with a special announcement from Soles4Souls. We can’t announce it now and spoil it for the Tennessee women, but as soon as Megan presents it, we will provide an update with details and a current shoe count! Pictures from convention will show the “shoe” fun members had during the planned Shoe Fashion Show. Categories include: Highest Heel, Strangest Animal Theme, Sexiest Boot, Most Sparkly, and during Junior Fun Night  where members will “bling out” girl’s shoes to compete in a Shoe Pageant where members vote with money for their favorite blinged pair with the proceeds donated to Soles4Souls.

The real story here belongs to the local clubs and their members. Fired up doesn’t even begin to describe what’s happening here. Who would’ve guessed women could be so passionate over used shoes – new shoes, yes, used, no. 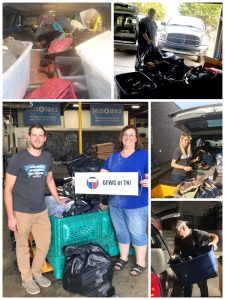 Pictured with the S4S team is
Jill holding the GFWC of TN sign.

Jill Jackson from the GFWC Dickson Country Woman’s Club said her familiarity with Nike’s Reuse-a-Shoe program got her interested in President Brock’s Grand Initiative. Jill said, “I had experience with Nike as my kids would wear their worst pair of shoes in the store and the associate would have to un-tag the new pair so we could leave the old ones behind. So I figured I could find a few pairs as the kids are too old now for me to buy new ones for them.” But when Jill heard about Soles4Souls at the Tennessee Summer Board she was really inspired about their work with the micro-enterprise program.

She then thought about her daughter who used to volunteer at a local thrift store, and how she said they didn’t have the space to sell that many shoes and would just get rid of them as soon they received them. Bingo!  Jill contacted the local thrift store, and now, almost weekly she takes a load home to count and sort. These aren’t small loads either; they usually fill up her minivan! Jill drives an hour each way to drop shoes off at Soles 4 Souls processing center. As of the end of February 2019, she has taken 9,158 pairs of shoes! Another 400 pairs are in her garage right now. Thankfully Jill’s husband has been a dear and even helps her with them. 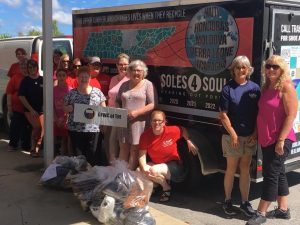 GFWC Cookeville Junior Woman’s Club hosted a Soles4Souls Shoe Drive for their community on a Saturday in the fall, announcing the event weeks before on the local radio station.  The community showed up and donated their used shoes – over 600 pairs! So many clubwomen helping with this event, that teams drove around to local yard sales and thrift stores. The Soles for Souls trailer promoted it as well as a place to store the shoes. Another drive is planned in late April at the same place with the S4S trailer again. (Pictured CJWC members in September 2018 during their community shoe drive.) 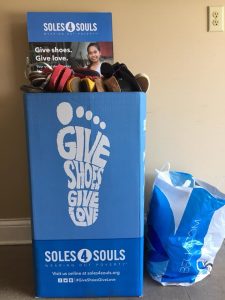 GFWC Ladies Reading Circle and GFWC Somo Sala Circle are located in the same city, Morristown, Tennessee, and work together on several projects. The clubs placed Soles4Souls collection boxes at 10 different businesses. A press release was published in the Morristown Citizen Tribune and the Jefferson Standard Banner. 170 pairs of shoes have been collected as of February 21, 2019. Additionally, GFWC  Ladies Reading Circle President, Donna Simpson, visited Soles4Shoes Headquarters and toured their facility. 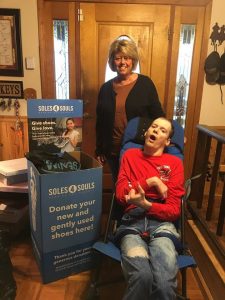 GFWC Greeneville Woman’s Club collected 496 pairs of shoes in 2018. The club’s efforts extend to the community and have received support from Cody Jennings (pictured with his Aunt Kathy and his collection box). Cody’s excitement about the project is a reflection of how this project can impact not only the recipients of the shoes, but of those of us that donate to and collect/process the shoes. 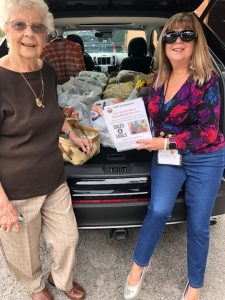 The GFWC Chilhowee Club collected 75 pairs of gently used shoes, one pair for each member. Marge Bogert and Janet Harpe (Pictured) delivered the shoes to our GFWC of Tennessee Fall Conference.

GFWC Sparta Woman’s Club has been collecting shoes on an ongoing basis since September 2018.  They held a rummage sale in October and all shoes that were not sold were kept for Soles4Souls. They have shared several posts on the local club’s Facebook page requesting donations and have been collecting and sorting them ongoing.  They also have information about Soles4Souls on their webpage.  (Pictured are members hard at work sorting and rubber banding the pairs together.)

GFWC Rutledge Woman’s Club views Soles4Souls as a great project in many ways. It has educated our community about Soles4Souls as a way to help others and by practicing recycling by donating used shoes. The clubwomen have collected over 1,000 pairs of shoes from friends and family, community and churches. (Pictured on left, Rutledge President, Pam Teague, with Megan Welsh, S4S.)

GFWC Centennial Woman’s Club of Tullahoma asked members to bring in shoes to every meeting and boy, did they bring in the shoes! In 4 months, members collected 682 pairs. For a club with 45 members, that equals 15 pairs per member.