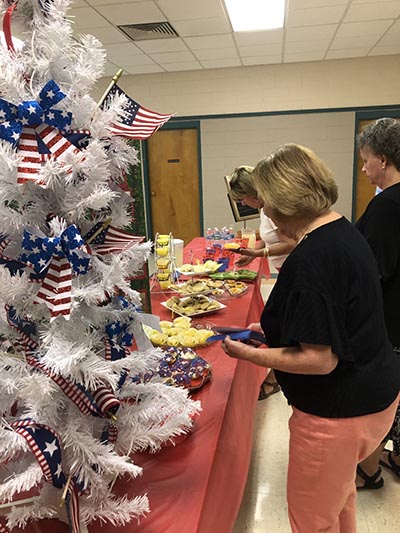 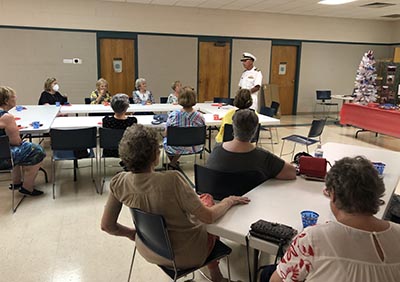 Members of the GFWC Valamont Woman’s Club enjoyed a Christmas in July event to raise sponsors for Wreaths Across America.

The GFWC Valamont Woman’s Club (Tennessee) started their holiday fundraising early with a Christmas in July gathering to get sponsors and raise funds for Wreaths Across America. Club President Linda Hershey explained the club has supported Wreaths Across Chattanooga for the past eight years, and the clubwomen were all excited to continue with this tradition. Rather than waiting until later in the year to collect donations for wreaths, members thought the July event would be a great way to get the ball rolling on this beloved project.

Linda said the club decorated a red, white, and blue Christmas tree, served refreshments, and invited Wreaths Across Chattanooga Director Mickey McCamish to speak to members and guests in attendance about the organization, its history, and mission. During the event, the club raised enough money for 40 wreaths to honor veterans at Chattanooga National Cemetery. Linda said the club will continue collecting donations throughout the year.

As many members of the GFWC Valamont Woman’s Club have loved ones in the National Cemetery, Linda said this has always been a personal and important project to the club.

“We want to show our appreciation for the sacrifices of veterans and their families,” added Club Treasurer Susan Lamberth. 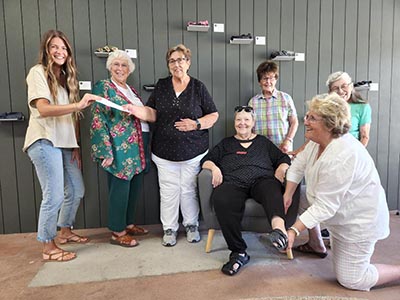 Members of the GFWC Woman’s Century Club (Idaho) presented a check to Because International’s The Shoe That Grows to help make a difference for children around the world.

Club member and GFWC Idaho State President Cindy Biesemeyer said clubwomen in Idaho have been fundraising for this nonprofit organization for several years to support its efforts to provide long-lasting, expandable shoes to children in need so that they can attend school with their feet protected. She added that GFWC Idaho Past State President Jean Hogin (2020-2022) also worked to promote this nonprofit and encouraged clubwomen to participate.

In addition to helping children, the organization’s warehouse is located in Nampa, Idaho, and has become an important part of the community. Cindy said all the clubs in the state organized various fundraisers of their own and turned in their donations during the State Convention in the spring. In total, more than $800 was collected for the organization.

“This project is part of how we can support the local community and these children,” she said. “This is a great way to advocate for children.”