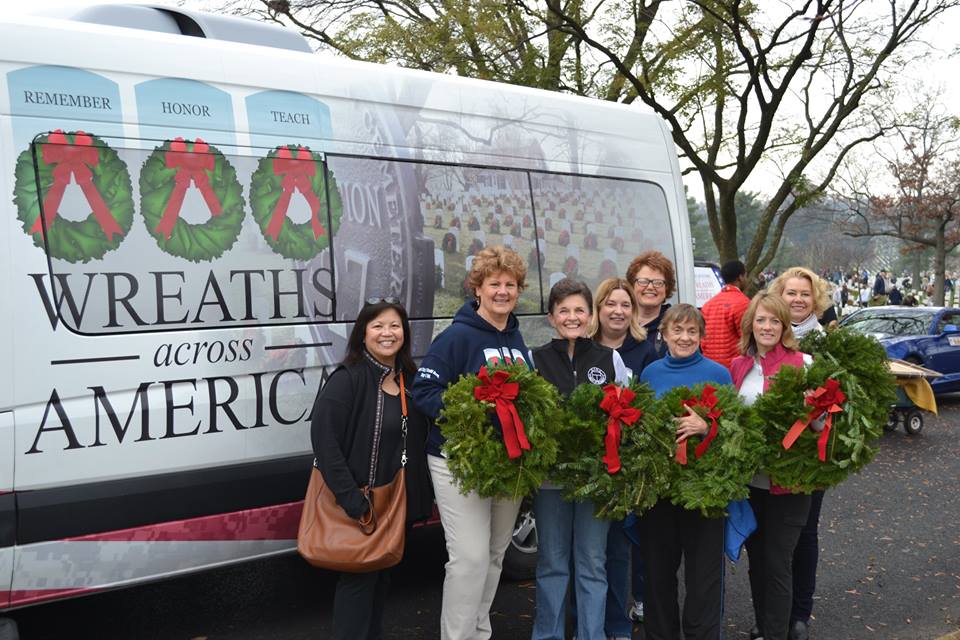 On December 12, GFWC International President Babs J. Condon, GFWC staff, and clubwomen participated in the annual Wreaths Across America Day at Arlington National Cemetery. Clubwomen Jennifer Nowak and Lisa Vartanian, members of the Wilbraham Junior Women’s Club, traveled all the way from Massachusetts for this special event. Below, Jennifer explains the history of Wreaths Across America and shares her special experience at Arlington Cemetery.

The History
Wreaths Across America began in 1992, when Morrill Worcester, the owner of Worcester Wreath Company of Harrington, Maine, had a surplus of holiday wreaths. Worcester remembered visiting Arlington National Cemetery at the age of 12, and decided he had an opportunity to honor our veterans. He arranged to place the wreaths at Arlington in sections that were receiving fewer visitors with each passing year.

As plans were underway, a number of other individuals and organizations stepped up to help. James Prout, the owner of local trucking company, generously provided transportation all the way to Virginia. Volunteers from the local American Legion and VFW Posts gathered with members of the community to decorate each wreath with traditional red, hand-tied bows. Members of the Maine State Society of Washington, D.C. helped to organize the wreath-laying, which included a special ceremony at the Tomb of the Unknown Soldier.

After many years of this wonderful tribute, a picture circulated on the internet in 2005 brought the project national attention. Requests poured in of people wanting to help, share stories, and thank Morrill Worcester for honoring our nation’s heroes.

In 2006, simultaneous wreath laying ceremonies took place at over 150 locations around the country. The Patriot Guard Riders volunteered as escort for the wreaths going to Arlington. The “Veterans Honor Parade” continues to this day as the wreaths travel the East Coast in early December.

In 2007, the Worcester family, along with veterans and other groups and individuals formed Wreaths Across America, a non-profit 501-c (3) organization, to continue and expand this effort.

The mission of this group is simple: Remember. Honor. Teach.

This trip began back in September, when I talked with President Babs Condon about a return trip to D.C. to attend Wreaths Across America. Without a hesitation, my sister-in-law and fellow clubwoman, Lisa Vartanian, were both ready to go back to help. We traveled once again, all the way from Massachusetts, and arrived late Friday night to a warm welcome at GFWC Headquarters. It was the beginning of a perfect weekend.

On Saturday morning, I woke up early and joined President Condon, President-Elect Sheila Shea, Chief Operating Office Rosemary Thomas, and Lisa as we traveled to Arlington early enough to see the Convoy enter the cemetery. We gathered at the front door at the WIMSA Memorial, where staff members Michelle Furman and Melanie Gisler joined us. Another clubwoman, Millie, also joined us after reading about the event in News&Notes. At nearly 60 degrees, the weather could not have been better.

The number of volunteers that came to show their respect and honor our veterans was astounding. They came in every age, from very young to very old, and every age in between. There were civilians like us, as well as military in uniforms, and veterans proudly displaying hats and apparel from their branch of service, who were a part of this inspiring day.

The Veteran’s Honor Parade began with Maine Police vehicles leading, followed by other vehicles that traveled from Maine, then the beautifully decorated trucks that carried the wreaths. Volunteers then followed the vehicles in and proceeded to different sections. While walking along, the white headstones lined with exact precision gave us goose bumps as we remembered each headstone stood for a person who protected and defended our country.

Soon the trucks cargo doors were opened and the wreaths were passed from one volunteer to another. I said a prayer of thanks for the dedication of our veterans before placing a wreath on a headstone.

As we looked around, it was heartwarming to see how quickly wreaths were placed on the headstones, when it seemed so calm and serene. It was inspiring to see how many people gathered at this hectic time of year to honor those who have fallen. It was humbling to see how many Americans sacrificed so much for their nation.

Soon the trucks were emptied, boxes broken down, and the debris cleaned up. Then it was time to walk and enjoy the beauty of the pristine white headstones with green wreaths and red bows, knowing that someone thought of each hero today.

To say the day was incredible would be an understatement. It was a day that reminds me to stand tall, and makes me proud to be an American.

Jen Nowak has been a member of the GFWC Wilbraham Junior Women’s Club since 1994 and currently serves as Treasurer.