What You Can Do for National Alzheimer’s Disease Awareness Month

The Alzheimer’s Association reports that more than 5 million Americans currently live with Alzheimer’s, and that number could reach as high as 16 million by the year 2050. They also report that it’s the sixth leading cause of death, and kills more than breast cancer and prostate cancer combined. Ending Alzheimer’s is a cause that needs attention, and as GFWC clubwomen, you can make that happen.

There are several ways you and your club can observe the month. Firstly, you can find a local walking event near you. 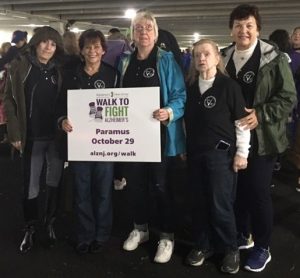 The Woman’s Club of Emerson (New Jersey) recently participated in the Walk to Fight Alzheimer’s, pictured above.

This month, the GFWC Woman’s Club of New Tampa will participate in the Walk to End Alzheimer’s for their second year in a row. The team is led by Treasurer Caralyn Paul, who lost her father a year ago to complications associated with Alzheimer’s disease. 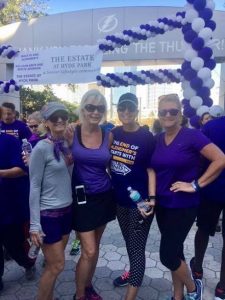 Many New Tampa clubwomen have family members and friends who have been affected by Alzheimer’s, and so they wanted the club to focus on raising awareness to help advance research to help treat, and eventually prevent, Alzheimer’s disease.

The Carrollton Civic Woman’s Club (Georgia) has participated in West Georgia’s Walk to End Alzheimer’s for ten years. Clubwomen walk, volunteer, and contribute monetary donations, with an additional club donation made through the Home Life Service Program each year. The picture below features Past Club President Nancy Johnson with her family at last year’s walk. Her daughter-in-law is a Care Consultant with the Georgia chapter of Alzheimer’s Association, which is one of the reasons the club supports the fight against Alzheimer’s. 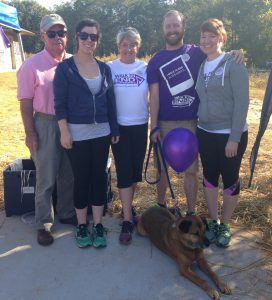 But the club’s work doesn’t end there. They have also supported their local Alzheimer Support Group for over twenty years by providing cookies for their monthly meetings. Each member in their Home Life Community Service Program has taken part in the hospitable tradition that supports family members who have loved ones affected by Alzheimer’s.

The disease can be very difficult for families to grapple with, so by supporting an Alzheimer’s Support Group, your club can be of great comfort to them, and show that you care. Other ways you can help include hosting your own benefit for Alzheimer’s disease, or supporting GFWC Partner Easterseals, which offers Adult Day Services that include programs for people with Alzheimer’s or other forms of dementia.

GFWC clubs have been dedicated both to ending Alzheimer’s, and providing support to those whose loved ones suffer from it. You can make a difference in the fight against Alzheimer’s disease all year long, but if your club is looking for ways to help, there’s no better time to get started than National Alzheimer’s Awareness Month.