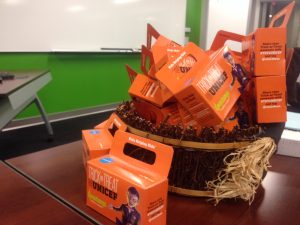 The Trick-or-Treat for UNICEF program was originally established to help children who were effected by World War II, but the well-loved and easily recognizable tradition has continued. Each year, children throughout the United States take a UNICEF box with them on Halloween night to collect change and donations, using a night of candy-filled celebration to think of other children less fortunate than them.

But kids aren’t the only ones who participate, and they certainly aren’t the only ones who can be of great support. Many GFWC clubs have their own collections. The Stone Mountain Woman’s Club (Georgia) took part in the festivities and passed out UNICEF boxes, encouraging members to add change to it daily throughout October so that their boxes will be jingling with coins when they bring them back in November. We pick up and hold on to spare change all the time, and this club is cashing it in for a cause. 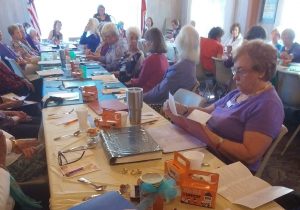 The Metropolitan Richmond Woman’s Club (Virginia) did Trick-or-Treat for UNICEF this year for the first time. President Lela Martin’s theme as president is “Connect with Metro”, and the club’s participation will do just that. She fondly remembers trick-or-treating for UNICEF as a child, and how it gave her a sense of connection to the children she would be helping, even if they lived far from her.

Club chairman Lyn Swallen ordered boxes from UNICEF and filled them with treats. Members will exchange the candy with coins, cash, or checks. For donations they can fill the boxes themselves, take them to their workplaces, or trick-or-treat on Halloween.

UNICEF determines the countries that need the most help, and allocates the money collected from the Trick-or-Treat program to specific programs in those countries. Clubs support GFWC Partner UNICEF all year round, but since Halloween is so linked to childhood, it seems a fitting time to come together and help ensure that disadvantaged children around the world have the support and resources that they need.