Lizzie Crozier French and the War of the Roses 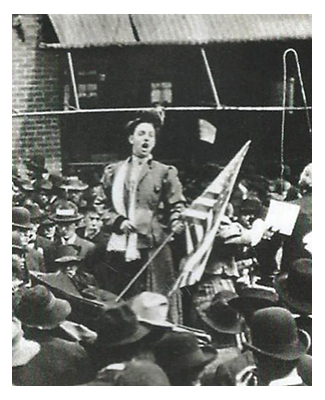 It was a hot, humid August in Nashville, Tennessee as the forces gathered to meet at the special session called by the governor to address the 19th Amendment to the United States Constitution. Supporters for women’s suffrage wore yellow roses and those opposed wore red American Beauty roses. These discussions and arguments continued night and day are referred to as the “War of the Roses”.

Preceding the special session of the Tennessee House of Representatives, clubwoman and suffragist Lizzie Crozier French traveled the hills and valleys of East Tennessee lobbying lawmakers to vote yes on the 19th Amendment.

Lizzie was born in 1851, formally educated at the Covenant of Visitation School in Washington, D.C. Widowed at 23, Lizzie devoted much of her life to women’s causes. In 1885, Lizzie visited the Sorosis Woman’s Club in New York City and returned to Knoxville inspired to organize a literary club that became GFWC Ossoli Circle.

In 1885 she established the Knoxville Female Institute, of which she would later become principal. Lizzie was also an eloquent public speaker and wrote a book called “A Manual of Elocution.” She founded the Women’s Educational and Industrial Union and was the first woman to address the Knoxville City Council, where she advocated for the appointment of a female police matron for women offenders. She assisted in the founding of the Knoxville branch of the League of American Pen Women, the PTA, the League of Women Voters, and the Unitarian Church. She was the first woman to speak before the Tennessee Bar Association and frankly said to them, “I wish I could say ‘Fellow citizens’, but since I am not accepted as a citizen by the government, I must say ‘Citizens and Fellow Servants.’”

Despite her long list of accomplishments, Lizzie primarily described herself as a suffragist and was active in the National Women’s Party. She influenced Harry Burn’s mother to write a letter to Harry, a young representative from Niota, Tennessee, to convince him to change his vote for the 19th amendment to YES. He was wearing a red rose that morning as the special session was called to order, but in his suit coat pocket he had that eight-page letter from his mother and a yellow rose.

Harry Burn cast the deciding vote for the 19th amendment to the Constitution of the United States. Supporters watching from the balcony threw their yellow roses into the air and over the railing onto the floor of the Tennessee House of Representatives.  The 19th Amendment was ratified. Tennessee was the “Perfect Thirty-Six” and Lizzie Crozier French had finally achieved her life-long dream for the women of the United States—they now had the right to vote.