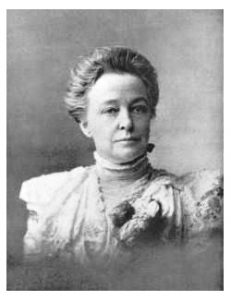 Rebecca Douglas Lowe became involved in club life in November 1895 when the General Federation of Women’s Clubs met in Atlanta at the Southern States Cotton Exposition. She was elected as president of the Atlanta Woman’s Club when it formed on November 11, 1895. In 1896, Lowe invited 17 other women’s clubs to meet and form the Georgia Federation of Women’s Clubs. She became GFWC Georgia President in1897.  At the 1898 GFWC Convention in Denver, Colorado, Lowe was elected GFWC International President.

Rebecca was clear that club life was not solely a social affair when she urged “every woman interested in the advancement of her sex to join the club from those in society to those who earn their living in Atlanta factories,” and stated that her mission was “to advance the education and general welfare of women along the broadest and most beneficial lines.”

Rebecca worked to organize women’s clubs all over Georgia while influencing and educating fellow clubwomen on the importance of women pursuing higher education. She was the first name on the petition to allow women in state universities in Georgia, she promoted free kindergarten, and she wanted to “take up the trouble of the working woman and see what we can do to lighten her labor and increase her pay.” Rebecca also wanted to “to study the school teacher’s problem and find out why she is not paid as much as the men who do exactly the same work.”

In 1895, Rebecca Douglas Lowe was already trailblazing a path for equality, education, and the welfare of women and children.  Although we’ve come a long way, she continues to inspire every woman within the Georgia Federation to bravely speak up for injustice and inequality and to always help those in need.