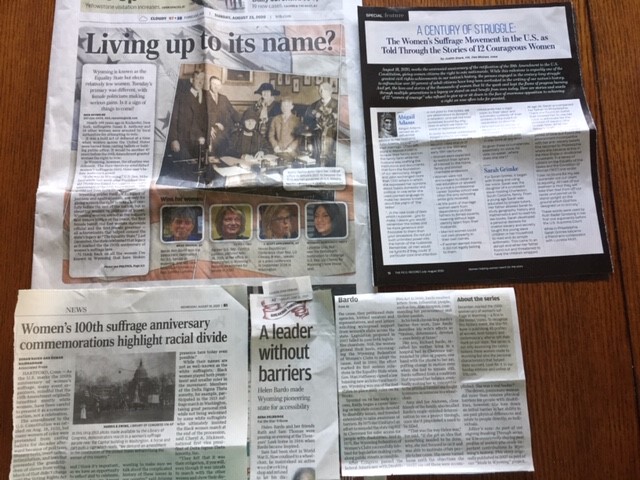 The GFWC Casper Active Service Club (Wyoming) celebrated the Suffrage Centennial by having tea (and lunch) at the Lavender and Lace Tea Room. The club discussed the PBS show, “The Vote,” and shared articles and stories about the amazing 72-year battle that the amazing women fought and won to give us this privilege!

The club also highlighted the amazing women in Wyoming who became voters in 1890, when it was still a territory. The club also talked about the late GFWC member Helen Bardo, who spearheaded the drive for accessibility for disabled people that led to the ADA becoming law. 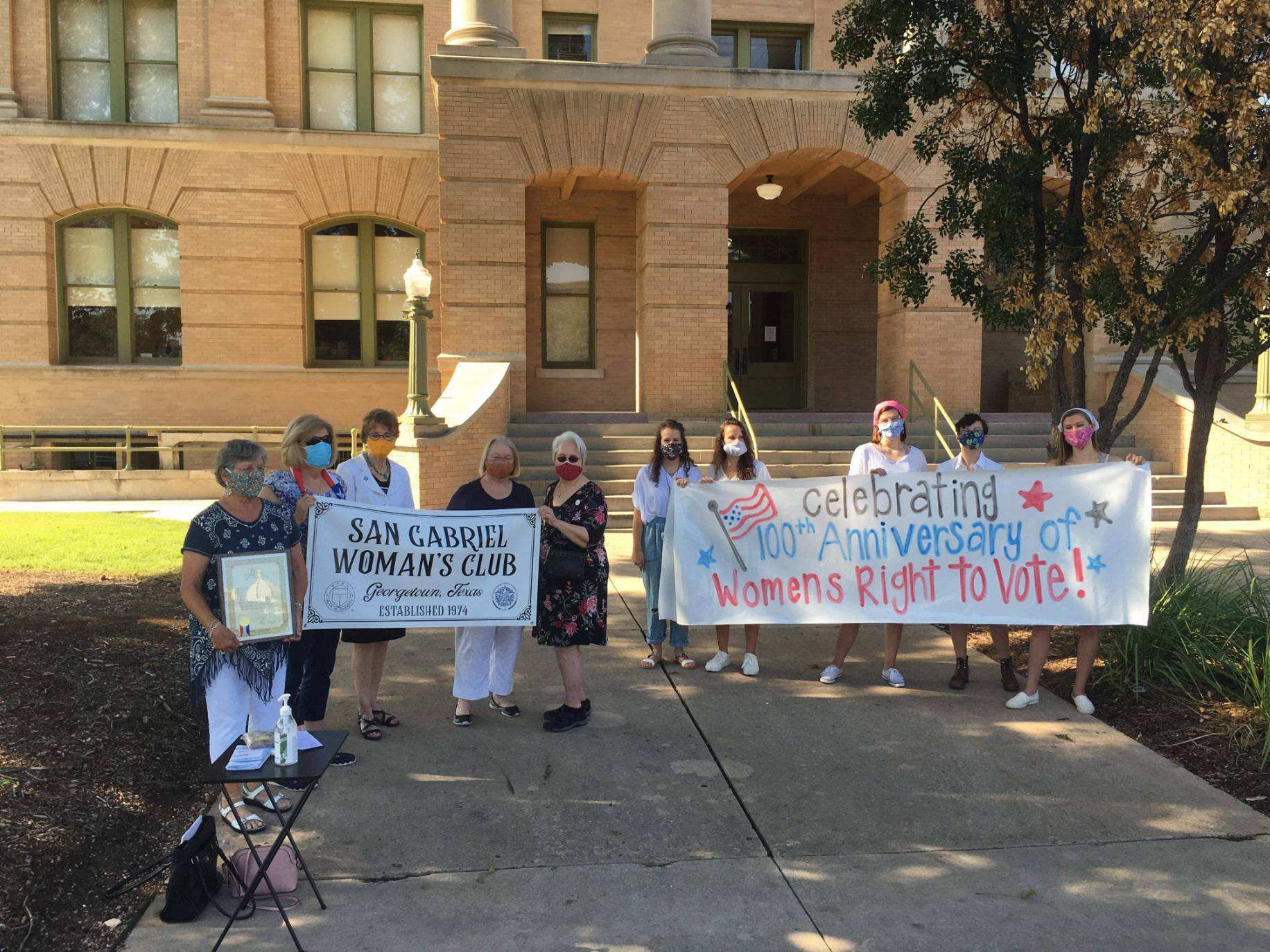 On August 18, 2020, several members of the San Gabriel Woman’s Club (Texas) met at the Williamson County Courthouse to acknowledge the 100th Anniversary of the 19th Amendment to the United States Constitution. Citizens of Georgetown also joined in the celebration.

The club was established in 1974 by women who had the “volunteer spirit.” Nancy Snead, the club’s Federation Counselor, spent many hours organizing the event. Mrs. Snead enlisted her granddaughter, Bailey, to make a sign.Then she put an ad in the newspaper and spoke with the Mayor of Georgetown. Mayor Ross sent a “Proclamation” recognizing this event being celebrated by the San Gabriel Woman’s Club.

Mrs. Snead talked about the history of the women who were dedicated to achieving the right to vote. She was very proud of her five granddaughters who participated in the event. 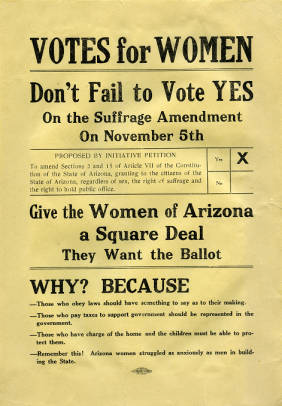 The GFWC Paradise Valley Junior Woman’s Club, Phoenix, AZ celebrated these women’s achievement through a presentation, “GFWC Arizona: Statehood and The Suffrage Movement” that was developed by one of their members, Debbie Grieder. It was shown via their Zoom meeting August 26, 2020.The presentation chronicled the rode to statehood and the suffrage movement led by Frances Munds, Pauline O’Neil, and Elizabeth Brawley Hughes. 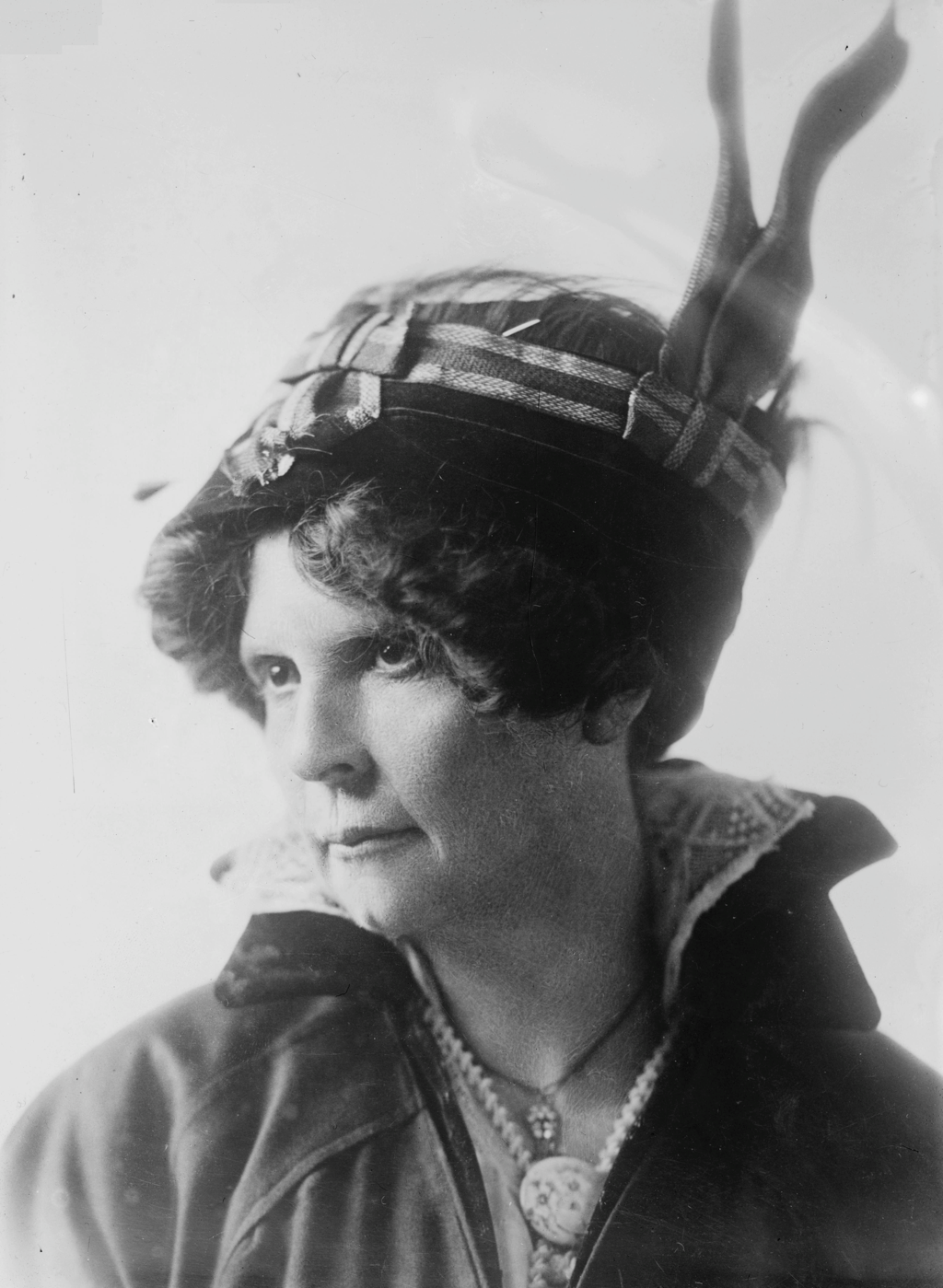 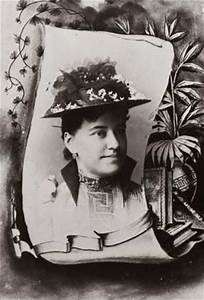 Frances Munds  (left, above) and Pauline O’Neil (right, above) were members of the GFWC The Monday Club of Prescott, the oldest GFWC Arizona club in the state, which is still active today. When enfranchisement was left out of the state constitution in 1912, they led a campaign to have the bill added via the state’s initiative process to the November 5, 1912 ballot. They had six weeks to gather the necessary 3,342 men’s signatures and file the initiative, which was accomplished thanks to a massive effort during the heat of the Arizona summer. They then spent months campaigning across the state to insure the vote was positive in their favor. On November 5, 1912, the suffrage amendment passed with 68%, the highest vote for suffrage in the nation. All counties in Arizona voted in favor and Arizona became the 10th state to grant women the right to vote. It was a proud moment for the leaders of the Arizona Women Suffrage Organization and for Arizona.  Frances Munds was elected to the Arizona State Senate in 1914 and Pauline O’Neil would represent Maricopa County in the House from 1915–1920.

The Mayor read a proclamation declaring the week of August 26, a time to commemorate and celebrate the sacrifices made by hundreds of women to see the ratification of the 19th Amendment.

GFWC Woman’s Club of Fredericksburg, President Beverly Rawlings, introduced each of the women leaders. They shared their thoughts on the 19th Amendment including the history of the suffrage movement, the struggle to pass and ratify the Amendment, and he courageous work of numerous women including Susan B. Anthony and Ida B. Wells.

The women were joined by a group of members from the WCF dressed as suffragists and donning yellow roses in honor of the members of the Tennessee Legislature who courageously voted to ratify the 19th Amendment on August 19, 1920, thus becoming the 36th state to do so. On August 26, 1920, Secretary of State, Bainbridge Colby ratified the Amendment and it officially became the 19th Amendment to the United States Constitution.

The Woman’s Club of Fredericksburg began their celebration earlier in the year by discussing the history of the suffrage movement and participating in a trivia game via their newsletter, The Scoop. 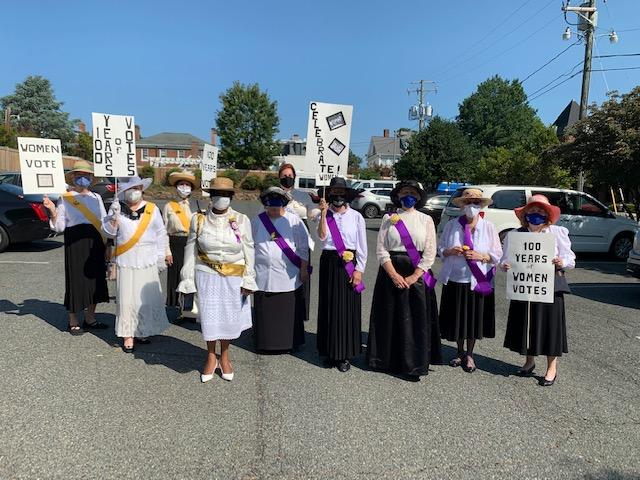