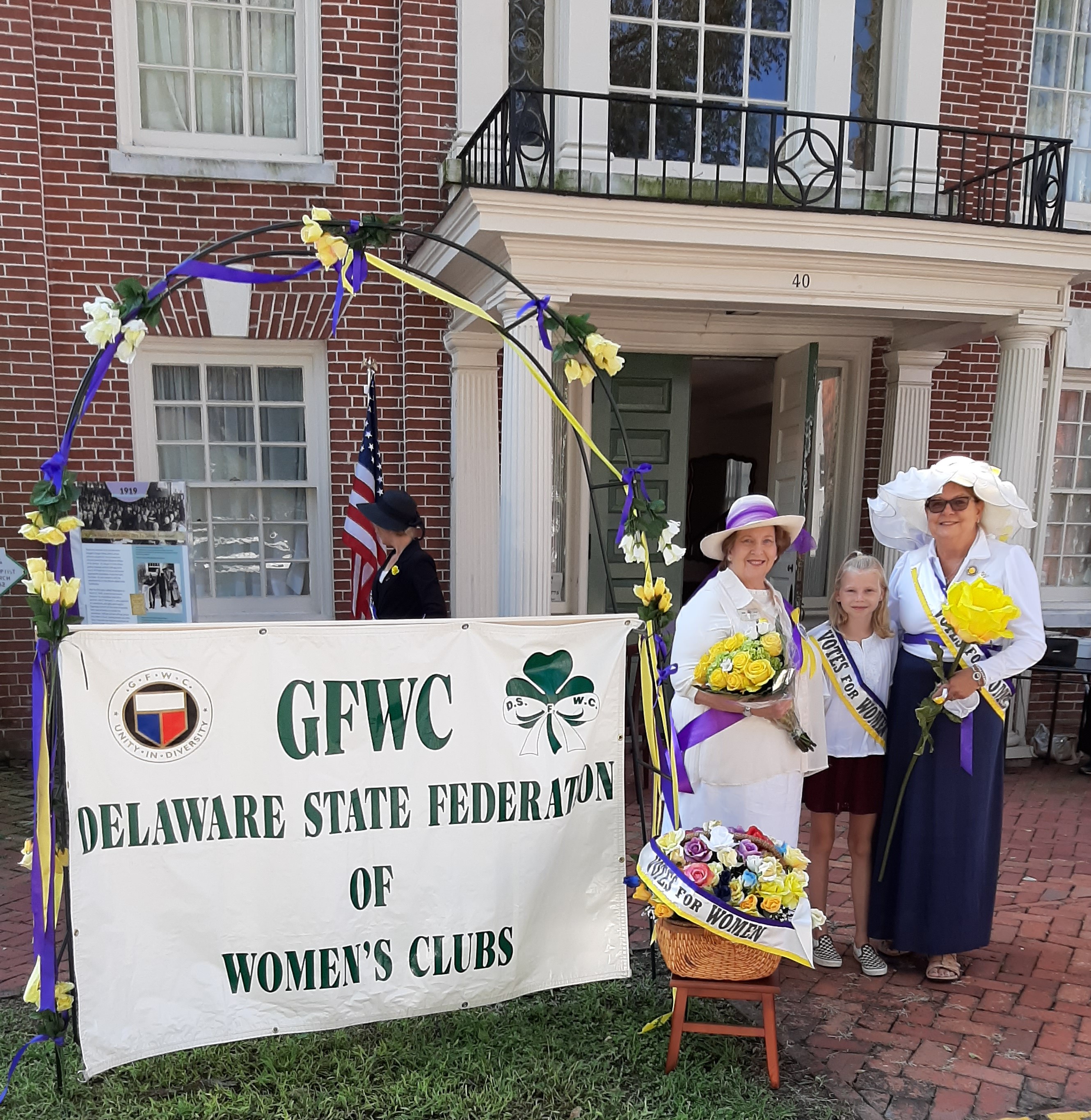 GFWC Delaware organized a march on The Green in Dover on August 26 to celebrate the 100th Anniversary of the 19th Amendment. A short program included a welcome by Past GFWC Delaware President Carolyn Forbes, member of The Dover Century Club, who was instrumental in arranging the event. Dick Carter, Chairman of the Delaware Heritage Commission, read a proclamation from the Delaware State Legislature and presented a copy to DSFWC President Rita Hollada. Hollada of the Selbyville Community Club welcomed those in attendance. She also stated that woman’s clubs throughout the country were instrumental in achieving the passage of the 19th Amendment. Twelve-year old Grace DiAntonio recited the 19th Amendment with her Grandmother Carolyn Forbes. 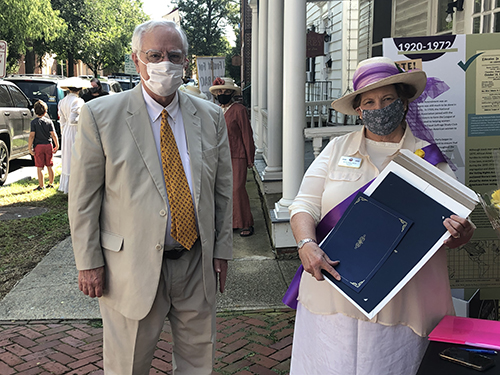 The march around The Green included members of other women’s organizations. Women were in white-period costume with purple sashes. The march ended in front of the Old State House where an historical marker commemorating Delaware’s struggle for women’s right to vote was dedicated.

After participating in the unveiling of the Women’s History Museum, (State Capitol, Feb 14, 2020), Cheryl Kappes, President of GFWC Glendale Woman’s Club (Arizona) knew she wanted to develop an educational program to honor the 100th Anniversary of Women’s Suffrage. The club created Flat Frances, designed to replicate Flat Stanley, with the goal of helping her reach every corner of the state by August 26, 2021.

The general public was invited to view the club’s first ever Suffrage Centennial Mini Museum at the clubhouse. The stars of the Mini Museum were the history panels depicting suffragists’ 72-year battle to the ballot. “Failure Is Impossible” was the play of the day, with a cast of characters that did not disappoint. 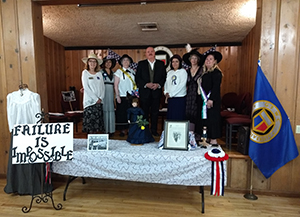 On August 26, The Miami Woman’s Club (Florida) organized a “Stroll to Celebrate 100 Years.” All clubs in GFWC Florida’s Southern District XI were invited to participate by meeting at Bayfront Park in the heart of Miami. All who “strolled” wore long white-period dresses, hats, sashes, and carried yellow roses. 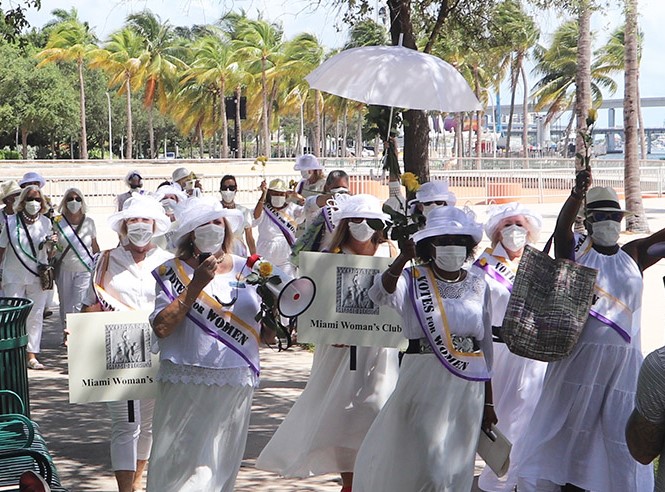 The Stroll wove its way down Biscayne Blvd, a main artery in Miami and then ended at the statue of Julia Tuttle. Known as “The Mother of Miami,” Julia Tuttle was a powerful force in the building of the city. The club added a “Votes for Women” sash to the statue of Julia. As the steps leading up to the passage of the 19th Amendment were read, the club placed yellow roses in the statue’s arms and at its feet. 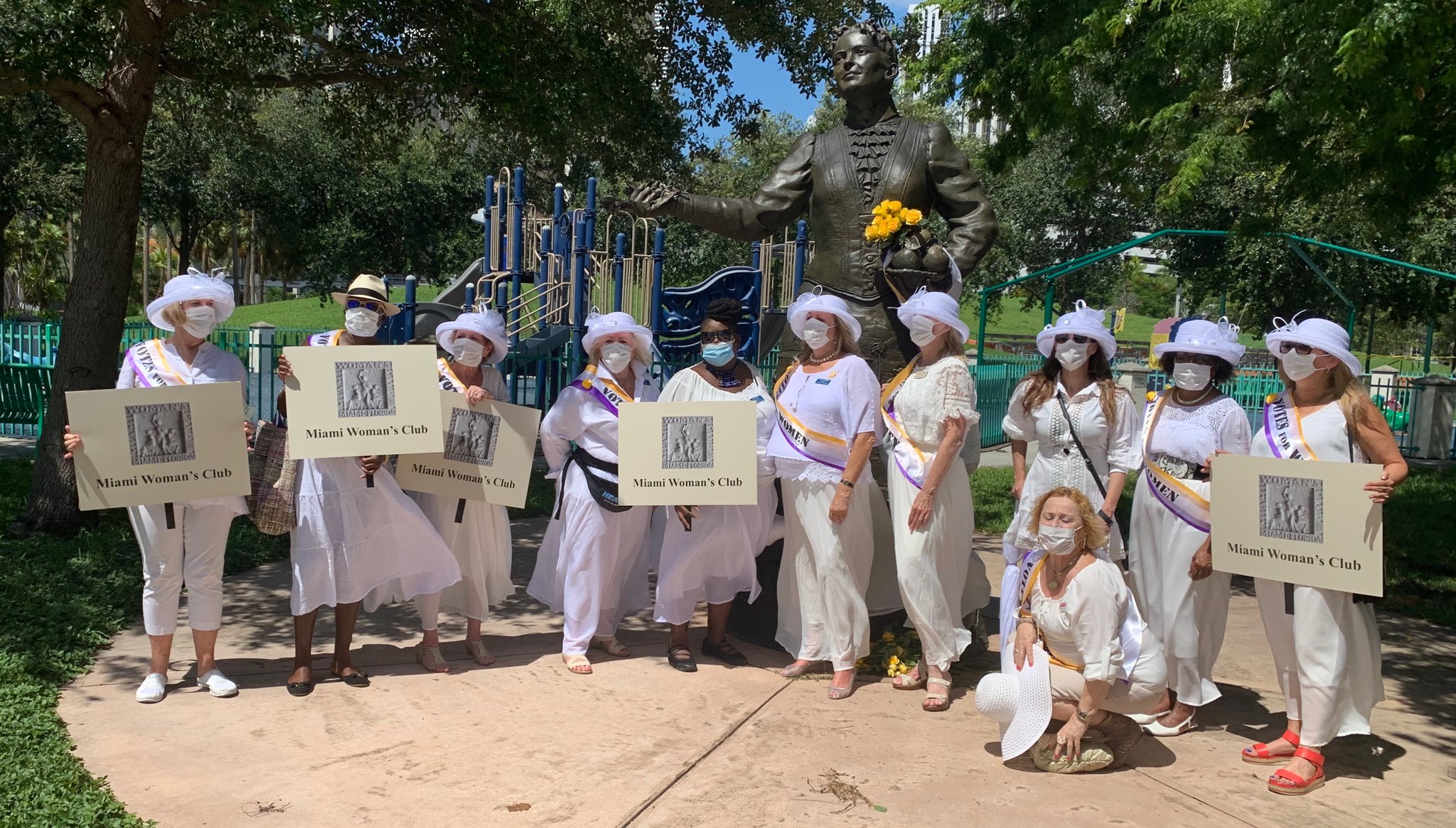 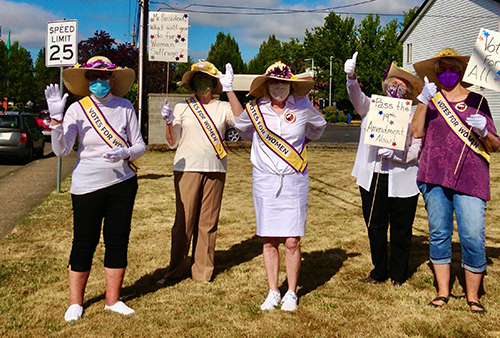 GFWC Battle Ground’s (Washington) “Suffragette Women” waved at passers-by on August 26 to honor the historical importance of National Women’s Suffrage Day. They positioned themselves across the street from City Hall and near the club’s GFWC Little Free Library. The costumed occasion brought attention to the adoption of the 19th Amendment. Club women in the General Federation of Women’s Clubs all over the country played a large part in the adoption of the amendment in 1920, a century ago.

The wearing of corona virus masks, sunglasses and shadows from the 1920’s wide-brimmed hats makes identities of the participants difficult. Pictured, left to right, are Gloria Walck, Johanna Hyatt, Paulette Stinson (GFWC-Columbia District President), Mary Lee Miller (Club President) and Wendy McDaniel. The sign that was easiest to read by passers-by was “Votes for All.” Hyatt made the sashes, “Votes for Women.”

Fifteen clubwomen of the GFWC Woman’s Club of Denville-Rockaway (New Jersey) area attended an event that celebrating the 100th Anniversary of the women’s right to vote. 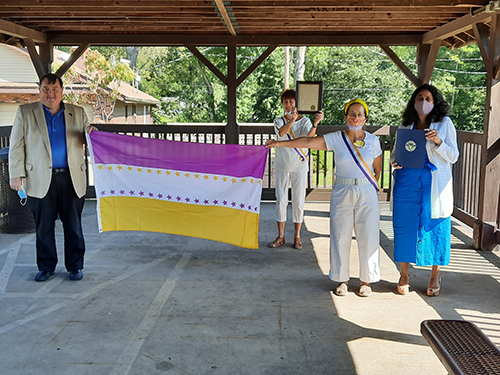 Pictured with the President of the GFWC Woman’s Club of Denville-Rockaway area Janet Walker are (from left), Denville New Jersey Mayor Tom Andes and club member Ruth Gimbel, holding the suffrage flag that was presented after the mayor presented a proclamation to our club. Also in the photo is Kellie Doucette, District Director to Congresswoman Mikie Sherrill of the 11th District, New Jersey. 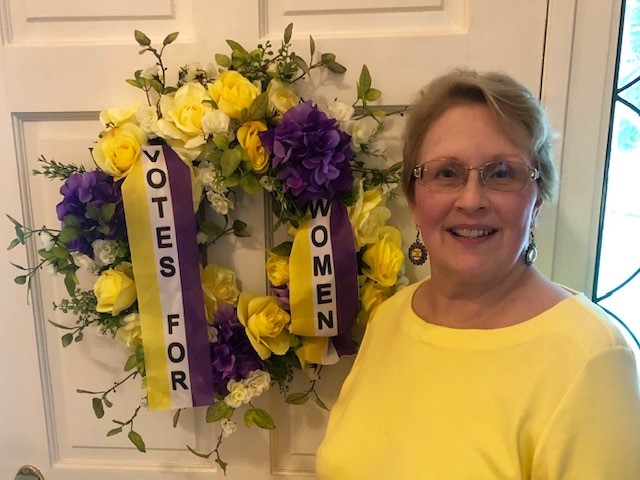 Members of the Stones River Woman’s Club (SRWC) in Nashville, TN, celebrated the 100th Anniversary of the ratification of the 19th Amendment in several ways. The 19th Amendment extended the right to vote to American women. SRWC President Betty Cannon obtained yellow ribbons for the members to use as yellow was a color favored by the suffragists. More than half the membership tied the ribbons to their front doors or mailboxes. President Cannon also notified the members of the re-enactment at the Tennessee State Capitol of August 18, 2020 so they could watch it live or later on video.

As a single mother of two boys requiring emergency medical care in the past, GFWC Oconomowoc Junior Woman’s Club member Elizabeth Davy was determined to work with her club and Emergency Medical Services for Children to fund pediatric jump kit bags for Wisconsin EMS departments.