The GFWC South Baldwin Woman’s Club (Alabama) stays busy by supplying food, clothing, and gas cards to clients at the Home Health Agency. This year, they also donated hygiene items and school supplies to a local school. Later, a guidance counselor who worked there personally contacted them: “I have a student in need of clothing. Is this something your club could help with?” Club donations allowed the club to purchase five outfits for the student! It shows how the community recognizes their efforts! The club’s next next big project will be the 2nd Annual Gulf Shores Goes Pink in October, a free community event which will raise money for people with breast cancer and their families. 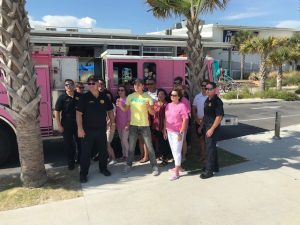 The GFWC Lilburn Woman’s Club (Georgia) has been putting on their Lilburn Daze, a festival that raises money for their philanthropy, for 46 years! They have one beloved vendor who has been a part of almost every one. In 1976, a young woman with a special talent of making fudge spotted an article in a Farmer’s Market brochure looking for vendors for the third annual Lilburn Daze hosted by the Lilburn Woman’s Club. On a whim, she called and asked if they would be interested in having someone like her participate in the event. At that moment in time everything changed for Estelle Roberts and Lilburn Daze – the “Fudge Lady” was born!  For the following 43 years, Estelle has been a vendor at Lilburn Daze and hasn’t missed a single year! Every year all of the club members ask the same question as the annual Lilburn Daze committee comes together to plan the event – “Will our famous “fudge lady” return?” The club is proud to say that once again, this year’s answer is a resounding yes. Estelle will be back with her wonderful fudge in delicious flavors such as chocolate, peanut butter, pecan chocolate, black walnut, and almond coconut. It’s incredible to see GFWC clubs making community connections that can last for decades! 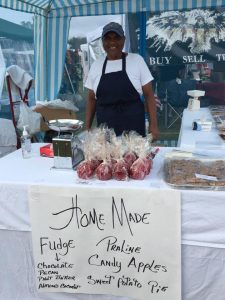