In support of the Women in the Military Grand Initiative, the Mulvane Federated Women’s Club (Kansas) have been sending emails, cards, and care packages to a deployed female soldier. The solider provided a list of items that she liked, ranging from her favorite chewing gum to preferences for hygiene items. The first package included locally-made beef jerky, and she commented that her friends really enjoyed it, so the club’s second package included even more jerky so there was plenty to share! Jean Horstman, corresponding secretary of the club, said, “When I mentioned to my husband that we were doing this project, he teared up. When he was in the service, those care packages were few and far between, but meant so very much to him. Thank you for setting our group on the path to work on such a worthwhile and rewarding project.” We’re so glad to see all the incredible ways that clubwomen support women in the military!

World Senior Citizen’s Day is coming up on August 21, and the Iranian Federated Women’s Club (California) let us know how they’re helping seniors in their community. They noticed that the seniors in their community who don’t speak English experience extreme isolation. To help them join the larger community, the club is collaborating with the Cupertino Senior Center to support programs (including technology classes, free informational lectures, a travel program, and more) that will hopefully combat that isolation and be a great resource.

The Murray Women’s Civic Guild (Utah) cut out mittens to be donated to the homeless shelter and a few other facilities. They created mittens of all sizes so that parents and children alike will be ready for Utah’s cold winter this year. 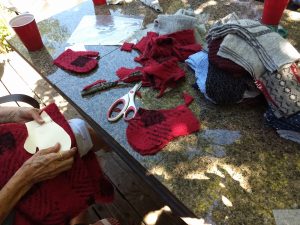 At the San Bernardino District Summer Conference, California clubwomen collected $61 in loose change for Operation Gratitude, a district-wide project. The organization emailed Public Issues Chairman, Linda Brooks saying they were in need of personal correspondence for troops, veterans, first responders, and book camp recruits. So she laid blank cards with instructions to write notes, and over 150 cards were made! 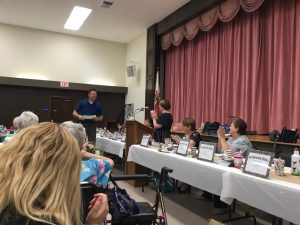