For the past 20 years, GFWC Temple Terrace Juniorettes (Florida) have held an Egg Hunt for their community and the proceeds go to Relay for Life. Since the Egg Hunt was canceled this year the girls decided to use their Egg Hunt supplies to make Easter bags for the children of St. Vincent de Paul Food Bank. Three of the club members are the grandchildren of the club’s advisor, Joyce Johnston. The children worked together to put the fill all 40 bags. Each bag has a dozen plastic eggs, two bags of candy, a prize, a craft item, and a sheet of stickers. The bags were given out to the children whose parents have been coming to the food bank for food boxes. The Juniorettes also donated $50 for the food bank to purchase more food, as there is an increased demand for food. 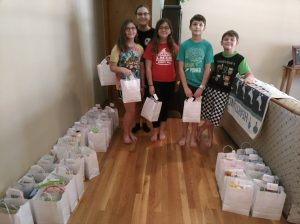 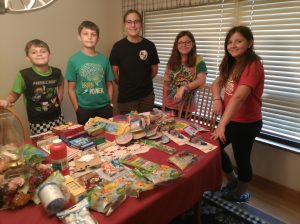 Twelve members of the GFWC High Springs New Century Woman’s Club (Florida) read to the kindergarten and first grade classes at the High Springs Community School for Read Across America Day on March 2. The members read a book written by Dr. Seuss in honor of his birthday. The book was then donated to the class for their library. 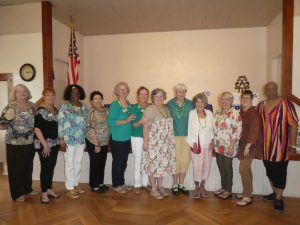 The GFWC du Midi Woman’s Club (Alabama), celebrated Dr. Seuss’ birthday at Second Mile Preschool with the Cat in the Hat a.k.a. President Adelaide Cape, and Education Community Service Program Co-Chair, Amy Tolson, reading a few of their favorite books. After reading, each child got to pick out one Dr. Seuss book to keep in support of the Grand Initiatives. Each student from the preschool also received a copy of “How the Grinch Stole Christmas!” as a Christmas present. 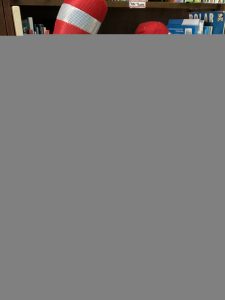