For Veterans’ Day 2019, Marna McDermott and Marsha Travis of the GFWC Woman’s Club of Cranbury teamed up for a special project to thank Veterans currently residing in Cranbury, New Jersey. Marna searched Township records and asked countless people for help in developing a comprehensive list of veterans in Cranbury. Marsha compiled the names into a spreadsheet, got Executive Committee approval for the wording, and printed the notes and envelopes. Below is a picture of the card which features a simple silver border and the Woman’s Club Lily motif as a watermark. The cards read:

The Woman’s Club of Cranbury wants to thank
you and your family for the sacrifices you have
made as a member of our military. Your selfless
bravery protected our freedoms when we needed you most.
May we never forget that freedom isn’t free. 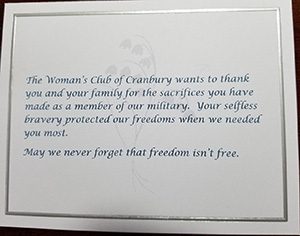 Above is a picture of the card which features a simple silver border and the Woman’s Club Lily motif as a watermark. 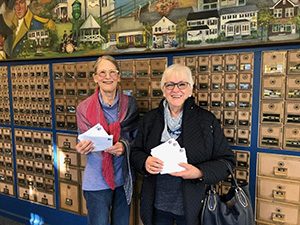 Above, we see Marna and Marsha at the Post Office, ready to mail their heartfelt thanks. 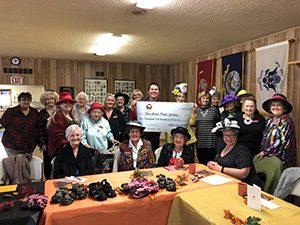 YWCA Glendale works every day to provide services and education to the community and works to end domestic violence.

On September 14, GFWC La Crescenta Woman’s Club hosted a Shoe Drive that supported the Soles4Souls as part of GFWC’s Grand Initiative. More 925+ Pairs of shoes were donated! This could not have done this without the community’s support and support from club members!

This summer the members of the GFWC Poultney Woman’s Club (Vermont) came together to collectively create 28 child size hospital gowns for their service project. Some members donated fabric and materials to make the gowns while others sewed the gowns from a pattern provided by Operation Smile.

On Thursday, October 17, the members of the GFWC Poultney Woman’s Club gathered the gowns and displayed them for a group photo at their monthly meeting. The gowns were delivered to the GFWC Vermont club meeting on Saturday, October 19 to be packaged up and sent to the Operation Smile project.

Minnie Bell Johnson is described by her fellow clubwomen as the happiest person they know, with a smile that brightens the whole room. Having just celebrated her 100th birthday, she has many reasons to smile. During her time with the Portland Woman’s Club (Oregon), she has served as both the club treasurer and club president. She’s still an active member to this day, voting on issues and club elections, and participating in projects like handing out personal care products to homeless women at the Rose Haven Women and Children’s Day Shelter.