The Mira Mesa Women’s Club (California) used the Buy Nothing Facebook Group (a kind of gift economy where communities can share free items or experiences with each other) to get donations for shoes. The club collected athletic shoes of all brands and took 91 pairs to a Nike Store, where the shoes will be kept out of landfills and be used to make new items. 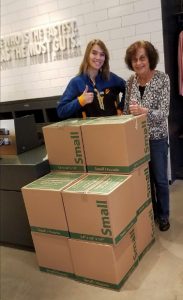 Read Across America is coming up, but some clubs have already gotten a head start! The Vienna Woman’s Club (Virginia) is collecting Dr. Seuss books for distribution by March 2 to the “Little Library” in the waiting room of the Adult Detention Center, operated by the Office of the Sheriff of Fairfax County. Their liaison is a 2nd Lieutenant whose father built a small library to shelve books for children to read and take home – children who are visiting their incarcerated family members.

The GFWC Ad Astra Club (Kansas) received a Literacy Grant from GFWC, along with a grant from Thrivent Financial. These grants, in addition to books donated by club members,  enabled the club to donate 50 Dr. Seuss books to the Read Across America Event. It allowed them to purchase enough books to give a book to each child in attendance at the event! 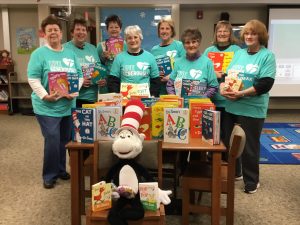 The San Diego Woman’s Club (California) packed 725 Dr. Seuss books to donate to three elementary schools, one homeless students’ school, Ronald McDonald House, a domestic violence shelter, and a new local library. Books will be given to the children at the schools for their own home library in time for Read Across America celebrations at the schools. There were 16 different titles and a book plate was placed inside each book commemorating the occasion.