On a blustery, cold day, a warm and receptive audience was held captive at the Human Trafficking Symposium held at the Hospitality House in Central Park. The symposium was sponsored by the GFWC clubs in the Fredericksburg, Virginia area that included the Woman’s Club of Fredericksburg, the GFWC Mary Ball Woman’s Club, and the King George Woman’s Club.

Over 100 guests heard a panel which included the poignant and personal stories of Amy, a human trafficking survivor, and Susan, mother of a human trafficking survivor, as well as the expertise of professionals who work to eliminate this insidious crime. These professionals included: Michele Trampe, Executive Director of the Central Virginia Justice Initiative, DeDe Wallace, Victim Assistance Specialist with Homeland Security Investigation for Virginia, First Sergeant Rob Grella, Jr., Stafford County Sheriff’s Office, Special Investigation Unit, and Bill Woolfe, Executive Director of Just Ask Prevention, former Human Trafficking Detective and FBI Task Force.  After the discussion, a networking lunch was served where guests could interact with the panel.

This event was inspired by GFWC Virginia State President Kelly Lane’s Project, “Step Up to Stop Human Trafficking.” The symposium was deemed a huge success. The issue of Human Trafficking continued with a visit to the General Assembly in Richmond on January 31st by Barbara Williams, President of the Woman’s Club of Fredericksburg and Legislative Chair, Dianne Watson, along with Suzie Smith, President of GFWC Mary Ball Woman’s Club and 1st VP, Elizabeth Louis-Ferdinand.  Organized by Meg Bohmke, Stafford Board of Supervisors member, the visit entailed meetings with two legislators, Delegate Bob Thomas and Delegate Charniele Herring, and Delegate Gilbert’s Legislative Aide to discuss House bills 2778 and 2470. They were pleasantly surprised to find that each person they spoke to was well informed on the issue and felt that it was a productive and successful visit.

At their January meeting, the GFWC Capital City Woman’s Club (Florida) collected dolls for a domestic violence awareness project. The club presented over 30 dolls to Sandra Collins with the Handle Me With Care Dolls Foundation. These dolls are given to survivor of physical and mental abuse. Sandra Collins talked about her history of being a survivor of domestic violence and what she is doing to help other survivors—young and old. Sandra joined the club that night (and she is already recruiting other new members!) and the club looks forward to having her as a new club member.

Inspired by a Facebook article they read, a couple of members from the Marlborough Junior Woman’s Club (Massachusetts) researched the possibility of installing sensory paths in all the Marlborough Public Schools. A sensory pathway utilizes a series of movements (walks, jumps, leaps, reaching, hand motions etc.) to decrease active classroom behaviors while increasing awareness of coping techniques. 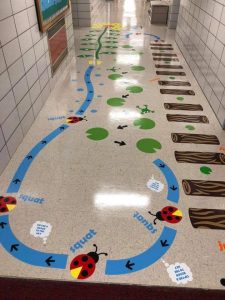 Their first installation is in use at a local elementary school. Their team will work with the high school in the future to build additional pieces needed, adding what the specialists and kids need and want! They intend to have the pathway impact all kids at appropriate levels of learning. Each path is $1500. The elementary school wanted to help with the pathway for its students, so they donated $1000.

During a chance discussion with a friend, a member communicated the club’s plans. Her friend works at Boston Scientific in the grant department. She caught the club’s enthusiasm and wrote a $1500 grant for the Marlborough Junior Woman’s Club to continue to put another path in a school in 2019.

The club published their project on their Facebook page and gained viral status – reaching other schools and clubwomen from around the country! They heard from a New Jersey Club, teachers in Ohio and Massachusetts, and even GFWC Treasurer Jolie Frankfurth in Florida! It’s an amazing project that they are very happy to have started with their club.

The Marlborough Junior Woman’s Club has 68 hardworking members who are currently working on grants and donations to ensure that the other three elementary schools and the one early childhood education center will all get these sensory paths. They are happy to help anyone with information as they build theirs! Their advice – find the school psychologist, the principal, and the custodian, and build your team of dedicated volunteers. This will truly take a village and it is worth it.