Members of the Palatine Literary Society (New York) and the Mohawk Valley Women’s Club (New York) contributed pocketbooks, toiletries, bathrobes, gloves, and notebooks with an estimated value of $1,078 to women’s shelters in the area. This effort is part of a national effort by GFWC to aid victims of domestic violence through a PURSE – Purses Uniting Resources to Successfully End violence against women – project done on a local club level. 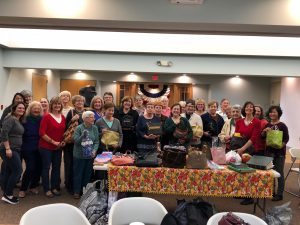 For Veteran’s Day, based on an article in the August 30th News & Notes, the GFWC Seward Women’s Club (Nebraska) brought items to their November meeting to make up Military Mommy Bags, which included a small bottle of water, lotion, Kleenex, Tic Tacs, Chap Stick, and a granola bar. They were proud to report that their small group of 24 members bought enough for 24 bags! One of the goals of Nebraska State President, Louise Zimmerman, in working with the Seven Grand Initiatives is for the Nebraska clubwomen to do 1,000 projects for women in the military. This is part of the GFWC Seward Women’s Clubs’ small effort. 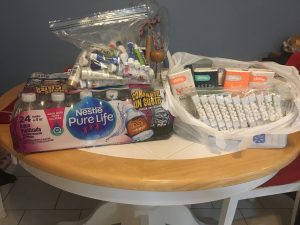 At a recent meeting,  15 members and 2 guests of the GFWC Achieving by Reading Club (Missouri) completed their Stuffed Mug Project for the moms and kids at Hope House Domestic Violence Shelter. They stuffed 108 holiday mugs until they were overflowing, then put each in a holiday treat bag tied with a big bow. Every recipient received candy, fruit snacks, a granola bar, or a cookie pouch. The moms’ mugs were also stuffed with items ranging from photo magnets to manicure kits. The kids’ mugs had surprises such as Christmas erasers and sticker boxes! 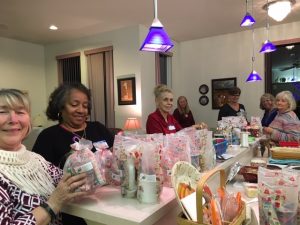 The event to light the Christmas tree outside town hall is an annual occasion in downtown Wake Forest, and so is the craft project offered by children by the Wake Forest Woman’s Club (North Carolina). This year, while children wait for their appointment to visit with Santa Claus, they decorated a small “chow” bag to look like a fanciful reindeer. A club member encouraged each child to set out the bag’s contents (dry cereal) at their home on Christmas Eve as a treat for Santa’s reindeer while Santa delivers toys. Club members also assisted the children in writing and mailing their letters to Santa. Approximately 200 children participated in the free activities, assisted by 11 Wake Forest Woman’s Club members. 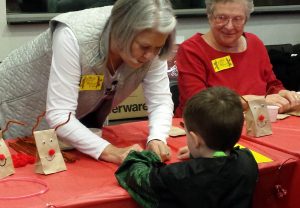