Gloria Dale has long chaired the Sunshine Committee of the GFWC Lutz-Land O’Lakes Woman’s Club (Florida), but has always gone above and beyond her duty. She single-handedly handwrote 5,200 personal Christmas cards to send to troops overseas and to local veteran’s nursing homes, hospitals, and senior centers. Rather than sit back and enjoy a job well done, Gloria has already started writing holiday cards for 2019! 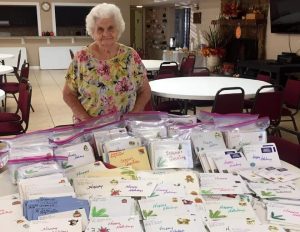 GFWC Georgia Service Guild of Covington won a 1st place ribbon for this year’s float in the Covington Christmas Parade on December 15th!  The parade theme “Bells Ringing Out” took a different twist with Service Guild’s float “Belles of the South Ringing Out Good Will.” Riding the float are member volunteers: L to R:  Kathy Rhoades, Unice Stevens, Carolyn Bennett, Donna Sneed and Pam Barnes.  Hats and bell-shaped dresses made of hoola hoops and Christmas ribbons were created by the club’s Art Program, co-chaired by Kathy and Pam. “Living the Volunteer Spirit” was also noted on the float banner! 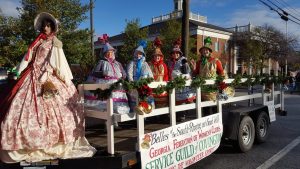 Growing membership and sharing the Federation experience has been one of GFWC Alabama’s primary objectives for this administration. At the beginning of the administration, the membership committee set the goal of establishing six new clubs – a new General and a new Juniorette club in each of our three districts. They’re thrilled to welcome two new Federated clubs this year!

The GFWC Alabama River Region Women’s Club was chartered at the GFWC Alabama Leadership Workshop on July 21st in Montgomery, Alabama at the Alabama Judicial Building. In order to support the new club in its first service project, attendees from across the state were asked to bring items to fill 100 small totes bags to benefit Mary Ellen’s Hearth at the Nellie Burge Community Center – a help and healing place for homeless women and children. Not only were 100 bags filled, but the response was so overwhelming that the GFWC Alabama River Region Women’s Club was able to donate items to numerous homeless shelters throughout the Montgomery area.

The Cahaba Valley Women of GFWC club was chartered at the GFWC Alabama Holiday Open House on December 1st at the beautiful, historic State Headquarters in Birmingham. Once again, clubwomen from across the state generously supported this new club in its first service project by donating items to SafeHouse, a women’s shelter serving Shelby County. This club quickly followed up with its first club fundraiser- pet photos with Santa! 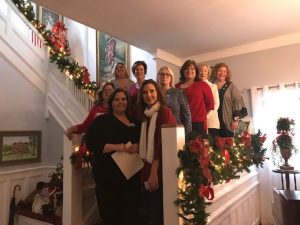 As you can see, GFWC Alabama has been actively sharing the Federation message, and they are looking forward to chartering even more new clubs in 2019. It is their understanding that there may be two new Juniorette clubs next year!