This summer a team of Village Improvement Association volunteers staffed the Rehoboth Beach Boardwalk Information Kiosk on Mondays and Tuesdays as they have for the past nine years. More than 55 VIA volunteers worked over 300 hours to keep the information flowing to beach visitors. From assisting a famished soon-to-be mother locate the nearest place to get breakfast to locating someone’s lost cellphone, gracious assistance from local residents helps maintain Rehoboth Beach’s reputation as an exciting and welcoming place for all, which keeps the vacationers returning year after year. 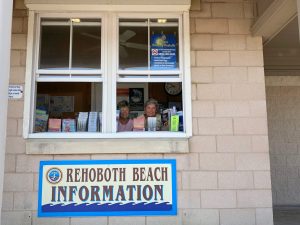 Just in time for Labor Day and in support of GFWC’s Women in the Military Grand Initiative, members of the GFWC Lilburn Woman’s Club (Georgia) Public Issues committee took turns during the construction phase of the first Habitat for Humanity home built for female veteran Octavia Moore. Then they assembled and delivered a beautiful housewarming basket which was presented during the Dedication Ceremony. After finding out Octavia’s favorite color was royal purple, members collected purple bath towels, throw rugs, kitchen goods, and vases sprinkled in with a few Fall outdoor garden art pieces. The club thanked Octavia for her service and there was not a dry eye in the house when she received the keys to her new home. 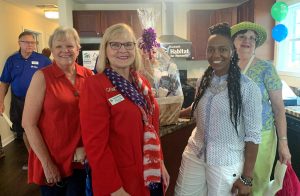 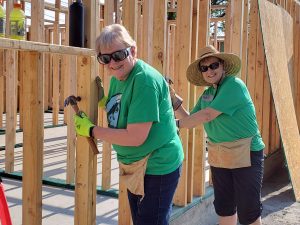 The Oconomowoc Woman’s Club (Wisconsin) is getting ready for their largest fundraiser of the year: their annual style show and luncheon. Fox 6 News’ Mary Stoker Smith and Oconomowoc’s Ralph Garcia will be the guest commentators. Their style show will feature fashions from local outlet stores and boutiques. There will also be a large raffle for attendees! All proceeds from the event go to local charities, including AngelsGrace Hospice, Lake Area Free Clinic, & Zachariah’s Acres.