The GFWC Meadowlarks, a club new to GFWC Wyoming, has been very busy over the summer. Members painted hallways at the local homeless shelter, COMEA House. They also served a delicious lunch to a Habitat for Humanity Crew, staying to visit and eat with them. They’ve planned ahead for future projects like entering a craft fair in October to raise funds! 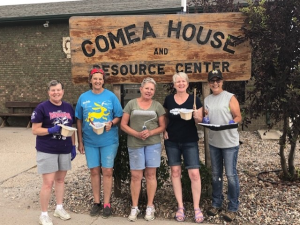 Literacy is a high priority for the Women’s Club of Farmingdale (New York) and so they were pleased to learn about International Literacy Day in a recent issue of News & Notes. For many years now, the club has renewed a special program where members donate a new security blanket, an age-appropriate children’s book (many times a Dr. Seuss book), and a stuffed animal, all nestled inside a new canvas tote bag. By providing objects of reliable comfort, this undertaking reduces trauma and advances the emotional and cognitive well-being of children. These totes are then donated to their local children’s homeless shelter in time for the Christmas holiday season. The club plans to continue this mission again this year. 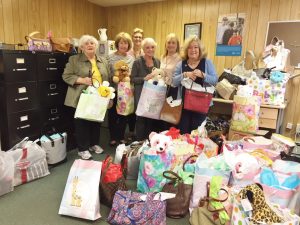 The GFWC Ohio Junior Cyberlinks Club turned their downtown community teal in recognition of September as National Ovarian Cancer Awareness Month. Members wore teal while hanging the teal ribbons on lamp posts and trees. They also posted signs encouraging people to know the signs of ovarian cancer. Among women in the US, ovarian cancer is the eighth-most common cancer and the fifth-leading cause of cancer death. The greatest number of cases occur in women over the age of 60. The club partnered with Erin Flanagan Lonsway, founder of the Rose Mary Flanagan Ovarian Cancer Foundation. 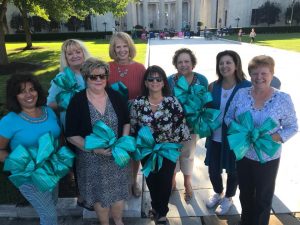