What does preserving nearly 130 years of histories, stories, and accomplishments entail? Preservation efforts can take many different forms. The Women’s History and Resource Center (WHRC) strives to preserve the history of the General Federation of Women’s Clubs (GFWC) through maintaining and digitizing archival records and museum collections and ensuring that our information is accessible to all.

The WHRC’s newest project, an effort to digitize our Oral History Collection, is just one example of how clubs can preserve their own histories and save the voices of their past. Discover how clubs across the country have been protecting and maintaining their club’s precious histories and historic documents in the articles below. 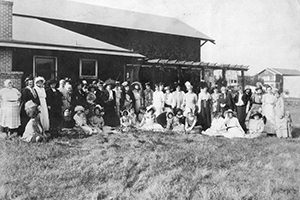 The Redwood City Woman’s Club has made preserving and honoring our clubhouse a top priority. As part of our preservation efforts, we recently embarked on a much-needed renovation of the main bathroom. The room was stripped down to the studs and then rebuilt to match the building’s 108 year-old craftsman style. Compliance with the Americans with Disabilities Act (ADA) was essential and the bathroom is now fully accessible to all.

To honor our clubhouse, we decided to nominate the building to the National Register of Historic Places. In order to conduct the necessary research, we formed a History Committee to oversee the process. Committee members spent the summer sorting, labeling, and filing 110 years of minutes, scrapbooks, committee reports, flyers, newsletters, correspondence, and financial records. Among these piles, we were excited to find a photograph of the clubhouse site before the home had been built and original club members from 1913. We also discovered the plans that were used to enlarge and modernize the clubhouse in 1939 and 1973, as well as board minutes specifying the changes.

The History Committee also decided to subscribe to Newspapers.com to enhance their research, which provided us with a wealth of information. Articles were found that detailed original club meeting reports in the home of our first President, Katherine Cumberson, and the progress of the clubhouse’s construction and grand opening. Of special interest to us were previously forgotten stories of club members, such as a duel with the Bachelors Club over a venue for a Calico Ball in 1911 and a grass fire that threatened to burn down the clubhouse in 1915.

The information enabled us to compile a comprehensive timeline for the club and clubhouse and put together a list of members who were active in Redwood City and the surrounding areas, from the club’s founding up until the present. We also created an index of our archives, inclusive of material that was found at Redwood City’s local history room and the San Mateo County Archives.

We are now planning on hanging copies of the photos we found, along with other historical photos we already had on display in our new bathroom. We have also posted the photos and some of the historical articles written about the club on our website.

The documents sorted by our History Committee have been archived and are organized and ready for the next generation of club historians.

Materials chronicling the history of the Sioux City Woman’s Club languished for more than 100 years in dark closets and basements of club members’ homes. The documents amounted to thousands of pages that were handwritten and faded, unevenly printed by early manual typewriters, or crisp computer print outs. These documents were prepared over those 100 years by women of all ages and various talents with a common spirit of service. These women made a difference in the civic and personal lives of people in the Sioux City community. They created a precious history of their lives and accomplishments over the 108 years of the club’s existence.

Thanks to efforts led by long-time club member Nancy Cord, six very large boxes of club records were packed and delivered to the Public Museum in Sioux City, Iowa. Archives Manager Thomas Munson gratefully accepted the materials; which included annual year books; meeting minutes; and scrapbooks containing photos, stories, and news articles about club projects and activities. Materials will be processed and catalogued by the Public Museum and made available for research. Recent materials remain in club files for reference by current members and officers.

Our story is the story of women’s contributions to the development of arts, education, health, and culture in Sioux City, Iowa. At last, it is safely stored, preserved, and available for future research and study.

Preserving The History of the Woman’s Club of Indio
Submitted by Mickie Reed, GFWC California

The Woman’s Club of Indio was founded in 1912. Until the early 1980’s, our club was diligent about preserving its history. All yearbooks, newspaper articles, and member information were collected and stored in the clubhouse. Like many early women’s clubs, the Woman’s Club of Indio was involved in the founding of many of the social institutions in its community. The club had a hand in establishing the local library, hospital, and even the local USO branch.

In 1980, membership began to decline and the clubhouse had to be sold. However, thanks to the efforts of a few faithful members, the Woman’s Club of Indio has increased recruitment efforts and been revitalized. Our recent spike in membership and enthusiasm has enabled us to begin to reassemble pieces of the past forty years of our history. Over the last two years, club members have begun making consistent efforts to carefully document current events and members. One particular project involved scouring the archives in order to learn the first names of our past presidents, as they had commonly used their husbands’ names.

To strengthen our recordkeeping and archival practices, we now write biographies of each member. We print the biographies, newsletters, and club Facebook posts on acid-free paper and store them all in protective archival boxes to deposit at the museum. We include copies of our general and board meeting minutes, treasurer reports, event flyers, as many pictures as we can collect, and sadly, some obituaries of our members.

We have asked members to share their histories with us and have discovered some amazing stories. Among our clubwomen are a former actress, an airline stewardess, sky-divers, and members who appeared in the Rose Parade. The stories are a testament to the strength of women and of our club members.

The Woman’s Club of Indio is now a thriving club with 121 members, and we are determined to keep our club and history alive.

Preservation of the GFWC West Central District began in 1949 when an official district historian was appointed. Over the last 70 years, we have collected scrapbooks filled with pictures, program documents, awards, attendance books, registers, and treasurer books. Thanks to the foresight of Past President Joyce Wahlquist, our District celebrated its centennial and 100 years of secretarial minutes were digitized.

Arrangements were made to have our minutes, along with scrapbooks, treasury, and secretarial books stored at the University of Minnesota Morris’ (UMM) Archives. The UMM was chosen as our primary repository; it is most central to all clubs in the District and easy accessible. Digitized disks went to GFWC Headquarters and the Minnesota Historical Society.

As each District scrapbook is filled, it is placed in the archives at the University and recorded by the District Historian. The secretarial reports are kept by the District with future plans of digitization.

Club members are aware that rapidly changing technology demands require developing future plans for digitization and storage of materials. Discussions are being held with UMM about submitting a grant to receive the necessary funding to do this work. We feel it is important to remember where we have been in order to move forward.

Help the WHRC preserve the voices of our past by supporting a fundraising effort to digitize all 341 oral histories in its collection!

Subscribe to WHRC News
Create a GFWC account and select the options under Communications Preferences to receive WHRC News. Have a personal profile already? Check that the “Do Not Email” option is not checked and that the “WHRC News” is checked.