1. GFWC Joliet Junior Woman’s Club participated in the Will County Take Back the Night march, vigil and rally on October 4 at Joliet Central High School. Two members were on the planning committee which met monthly for this annual event to raise awareness about domestic violence, sexual assault, and other forms of violence against women. On the evening of the event, members hosted a poster-making table. Loved ones of survivors and members of the public were invited to create signs on poster board to be displayed during the 1-mile march through downtown Joliet. Members donated markers and poster board to be use for signs. GFWC Joliet Junior Woman’s Club also donated $250 as sponsors of the event. The club also collected $50.00 in-kind donations. 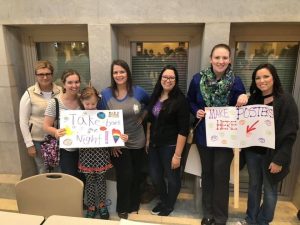 2. Darien Woman’s Club collected costume jewelry from members in November to use as Christmas gifts for the residents in the women’s shelter at Family Shelter Services. Necklaces, bracelets, and earrings were matched to make gift-boxed sets with a ribbon on them. Enough gifts were included so that each of the 28 residents would have a wide variety from which to choose. Members of Darien Woman’s Club collected $200 in-kind donations. 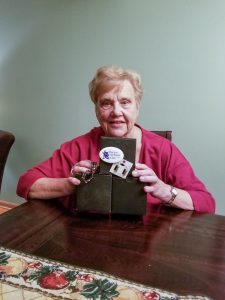 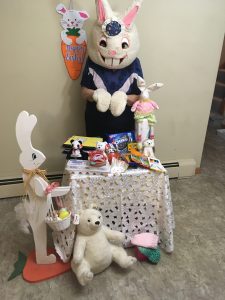 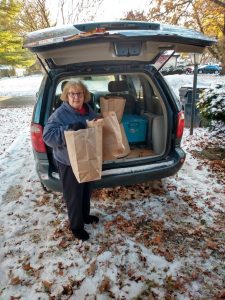 5. GFWC Illinois Plainfield Junior Woman’s Club (PJWC) demonstrated a commitment to Will County Take Back the Night, an annual event to raise awareness for violence against women and children, to support survivors in their healing process, and to raise funds for local agencies which assist women and their families. Members gathered in the center of town on October 1 and planted 100 purple pinwheels facing busy Route 126. They also placed a sign next to the pinwheels stating PJWC’s dedication to the Will County Take Back the Night Event (TBTN). The purpose of the display was to raise awareness of domestic violence prevention and the TBTN event. The pinwheels were left on display for the month of October. On October 4, members attended the TBTN event and participated in the candle light vigil where the name of each survivor was read in memorial. In addition, members aided in the collection of food items, paper goods, and grocery store and gas station gift cards donated at the event for the Guardian Angel (domestic violence shelter). Club members have further shown their support as a Gold Sponsor of TBTN. 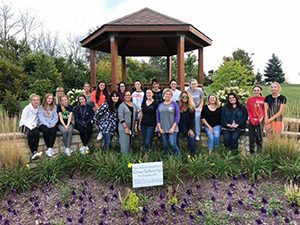 6. Morris Woman’s Club invited a group of women who were in a support group for survivors of domestic violence to a “Pampering You Luncheon.” These women were invited to a craft and luncheon time as a way to “pamper” them. Upon arrival, the women were led, stroke by stroke, in painting a picture on canvas. Next they were served a luncheon, including a selection of homemade pies, in a decorated dining area, along with favors at each place. There was a gift for each participant as well. Morris Woman’s Club collected $55.00 in-kind donations. 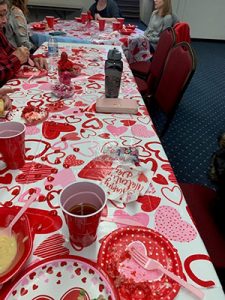 7. GFWC Macomb Woman’s Club set up a table in the entryway of a local grocery store to collect donations for the Samaritan Well (homeless shelter) and the animal shelter on Make a Difference Day. From 11:00 a.m.–3:00 p.m., patrons of the store were handed slips of paper as they entered containing a list of needed items by the two local agencies. Customers were asked to consider purchasing something and turning it in to a woman’s club representative as they left the store. Club members were also asked to shop during this time so that they could contribute as well. Preparations for the event included contacts with the store and local newspaper, an article for the newspaper, development of handouts to patrons, and contacts with the animal shelter and Samaritan Well. Donations given to the homeless shelter were $689 worth of cleaning, personal hygiene, and disposable kitchen/dining items as well as $200 in cash. Collected for the animal shelter were over $631 worth of cleaning supplies, pet food, litter, and toys and an additional $227.00 in cash. While the residents of these shelters are not all abuse survivors, domestic violence contributes to homelessness for people and animals. 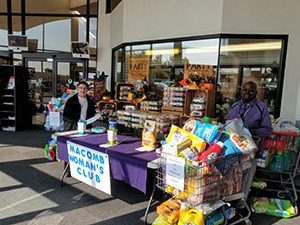 8. Morgan Park Woman’s Club supported A New Direction (AND) Beverly Morgan Park by donating women’s and children’s socks. Club members were asked to purchase new women’s and children’s socks with the suggestion that the socks be colorful and particularly fun. The socks were packaged in individual plastic baggies that included a slip of paper with the following message: As you begin your new life and Step Away from Abuse, we hope you will find comfort and warmth as you walk into your newly found freedom. Members delivered 141 pairs of socks, 36 for women and 105 for children to this domestic violence advocacy and counseling center. The club did the project because it brought joy to the clients of the center and let them know members cared about them. The head of and said how much everyone enjoyed the socks, especially the children. $423 in-kind donations were collected. 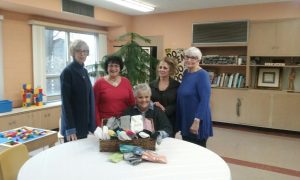 9. The GFWC Illinois Effingham Women of Today celebrated with a pajama party in December where members wore comfy PJ’s to their meeting and donated 32 pairs of pajamas to the Department of Child and Family Services. Members realized that children were being removed from their abusive homes during the evening hours with nothing wear at night. Having a warm pair of new pajamas helped to reduce the fear and confusion children felt during this stressful time. Members of GFWC Illinois Effingham Women of Today raised $250 in-kind donations. 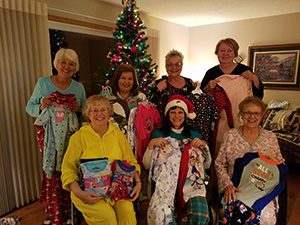 10. GFWC Illinois Geneseo Woman’s Club cut and tied fleece blankets for two domestic abuse shelters. The blankets were packed with a stuffed animal or toy that matched the design on the blanket. The packages were delivered to the shelters to be handed out to the residents and past residents during the annual Christmas parties. A total of 60 blanket/toy packages were created and delivered to Winnie’s Place in Moline and a total of 60 blanket/toy packages to Freedom House in Princeton. The club collected $1320.00 in-kind donations. 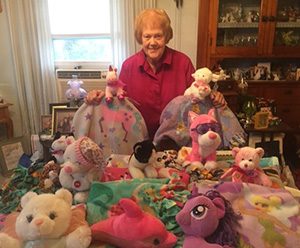 Members of the New Jersey State Federation of Women’s Clubs have collected more than 1,000 holiday stockings for service members. Individual clubs donate the stockings, from a few to a hundred per club. The stockings are being sent overseas through Operation Yellow Ribbon South Jersey, a nonprofit dedicated to supporting our troops. Holiday stockings are filled with items needed or wanted by soldiers, including candy, personal care products, packaged snacks like jerky and trail mix, wet wipes, foot powder, and many other products. In 2018, the state collected over 1,700 holiday stockings, and this year’s count is expected to be at least as many. Monetary donations are also collected to help with the cost of overseas shipping. 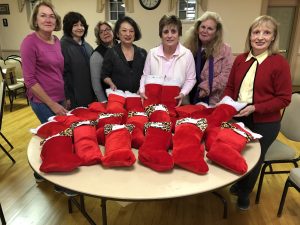 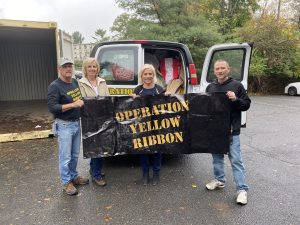 GFWC Woman’s League of the Lowcountry (South Carolina) held a tea on Saturday, November 9, 2019 at the Lakehouse Ballroom in Sun City Hilton Head, SC to honor area women who have served in the military. Twenty-eight women veterans attended the event along with thirty-five club members. One of the highlights of the afternoon was hearing from each of the honored guests share stories about their service. Guest speakers were Capt. Mary Houser, USN (Ret.), Col. Joyce Humphrey, USA (Ret.) and Martha Spisso who served with the Red Cross and as a “Donut Dollie” in Vietnam. Guests were entertained with a rousing rendition of Boogie Woogie Bugle Boy. Two of the honorees were randomly chosen to have their military information submitted, at the club’s expense, to Women in Military Service for America (WIMSA). As an ongoing project, the club will continue to honor our women veterans and seek to have each woman’s service registered with WIMSA.