The GFWC Woman’s Club of Westminster (Maryland) has an annual project that corresponds with one of International President Brock’s Seven Grand Initiatives. Every year the club partners with Penguin Random House, one of the area’s publishing houses and distributor of books, to celebrate Dr. Seuss’ birthday. Penguin supplies them with Dr. Seuss books and the club funds the purchase of other titles to distribute to children in pre-K, kindergarten, and first grade. The ladies on the education committee spend many hours placing a bookplate with space for the child’s name and donor information in each title. The committee delivers the books in February to the schools. Every March to honor Dr. Seuss’ birthday, club members and guest readers (service club members, government officials, police officers, local college staff and students, residents in local retirement communities, and business leaders) volunteer their hours to read to children in 105 classrooms in 13 schools and assist the children in selecting a new book for their personal library. This past year the club donated over 2,000 books. Some of the readers wore Cat in the Hat hats and the kids and readers had a great time. Each reader brings a favorite Dr. Seuss book to read to the children, many of which they read to their own children. Many of these children are from low income families and don’t have the money to purchase books of their own. This is one way that the club reaches out to the community and helps those in need. This project was initiated in 1 classroom in 1998 and continues to be supported by community businesses. The contributions of Penguin and the overwhelming support of the business community has helped to make this yearly project a success. 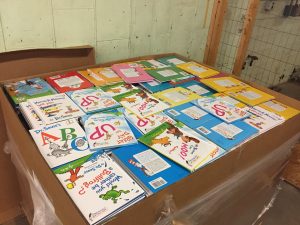