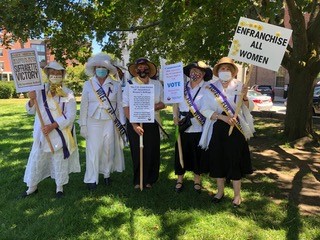 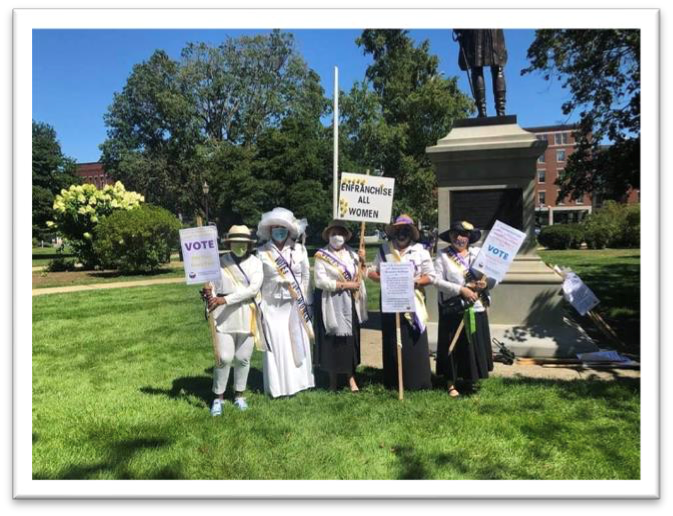 In her opening remarks, GFWC New Hampshire President Jeanne O’Sullivan, from Exeter, shared that GFWC New Hampshire is comprised of 22 clubs, providing service to communities for 125 years. United States Senator Jeanne Shaheen, the first elected woman Governor of New Hampshire and the first woman U.S. Senator from New Hampshire, was unable to attend, but sent a letter which was read by Phyllis Appler. GFWC New Hampshire Chairman of Legislation and Public Policy Laurie Jasper, who organized the event, spoke of the history of women’s suffrage.

Jasper next introduced Governor Sununu, thanking him for his leadership during these unprecedented times of COVID-19. Sununu praised GFWC New Hampshire for celebrating New Hampshire’s place in the suffrage movement amidst restrictions and difficulties due to the coronavirus. “I’m just so excited you were able to hold this event today. I think it’s a great representation, truly, of what the Live Free or Die State is all about. We have had such incredible representation in New Hampshire by women, on both sides of the aisle, who have really led the charge. I think it’s a testament of how important the issue is, the fact that you organized and that you are making sure this is being heard today and as we move forward,” said Sununu.

The program concluded with photographs. Each participant received a yellow rose, compliments of Anne’s Florals and Gifts in Hudson, New Hampshire. 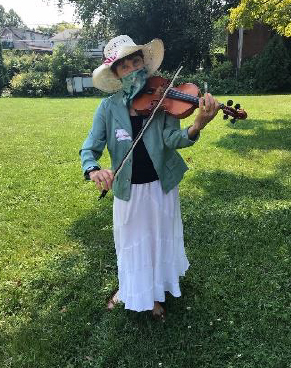 The GFWC Shorewood Woman’s Club (Wisconsin) celebrated on August 26 with a violinist playing folk tunes and the accompaniment to a song written by a member, “Vote, Vote, Vote,” while clubwomen sang the words.

Then a group of ladies read the 11-page speech entitled “We Can Do It,” written and distributed by the National Women’s History Project. The members wore mostly white, large hats reminiscent of the early 1900s, and sashes of gold, white, and purple with the words “Votes for Women.” The presentation ended with a short acknowledgement about the issues we face today regarding the social justice movement. 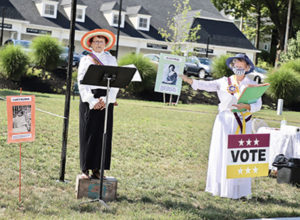 On Aug. 22, members of the GFWC Northborough Junior Woman’s Club (Massachusetts) dressed in period attire and held an event to celebrate the Women’s Suffrage Centennial. On the Town Common, clubwomen recited speeches that were originally given by Suffragists like Alice Paul, Ida Wells, and Lucy Burns, to mark the 100th Anniversary. 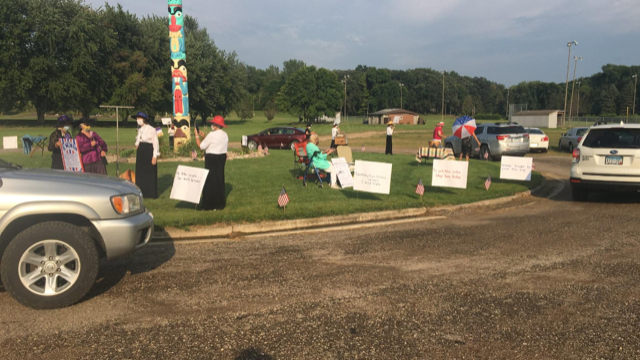 A stationary parade celebrating the 100th anniversary of the 19th Amendment was sponsored by two Minnesota clubs: GFWC Potpourri Glenwood and GFWC Starbuck on August 26, 2020. Mask wearing and social distancing were practiced because of the COVID-19 pandemic. They partnered with the Pope County Historical Society, resulting in having the parade around the museum’s totem pole. Spectators remained in their cars seeing women in period clothing holding signs and flags, household antiques, and signs lining the drive telling the story. Parade viewers received an activity sheet to find items along the route and answer questions about this historical event. As they exited, Pope County’s Historical Curator gave them a handout on the history of the suffrage movement in the United States, comments on the Equal Rights Amendment, and voting information. 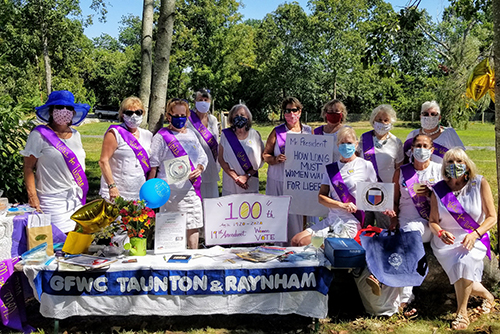 The Taunton and Raynham Junior Woman’s Club (Massachusetts) marked the 100th Anniversary of the 19th Amendment on August 26 with a social distancing “Iced Tea” event that was held outdoors at the home of a member. Clubwomen wore white and purple Votes for Women” sashes. Suffrage pamphlets were distributed along with Suffrage 100 pins. The members participated in an activity making beaded holders to attach to their COVID-19 face masks which everyone wore for a group photo commemorating that landmark day. 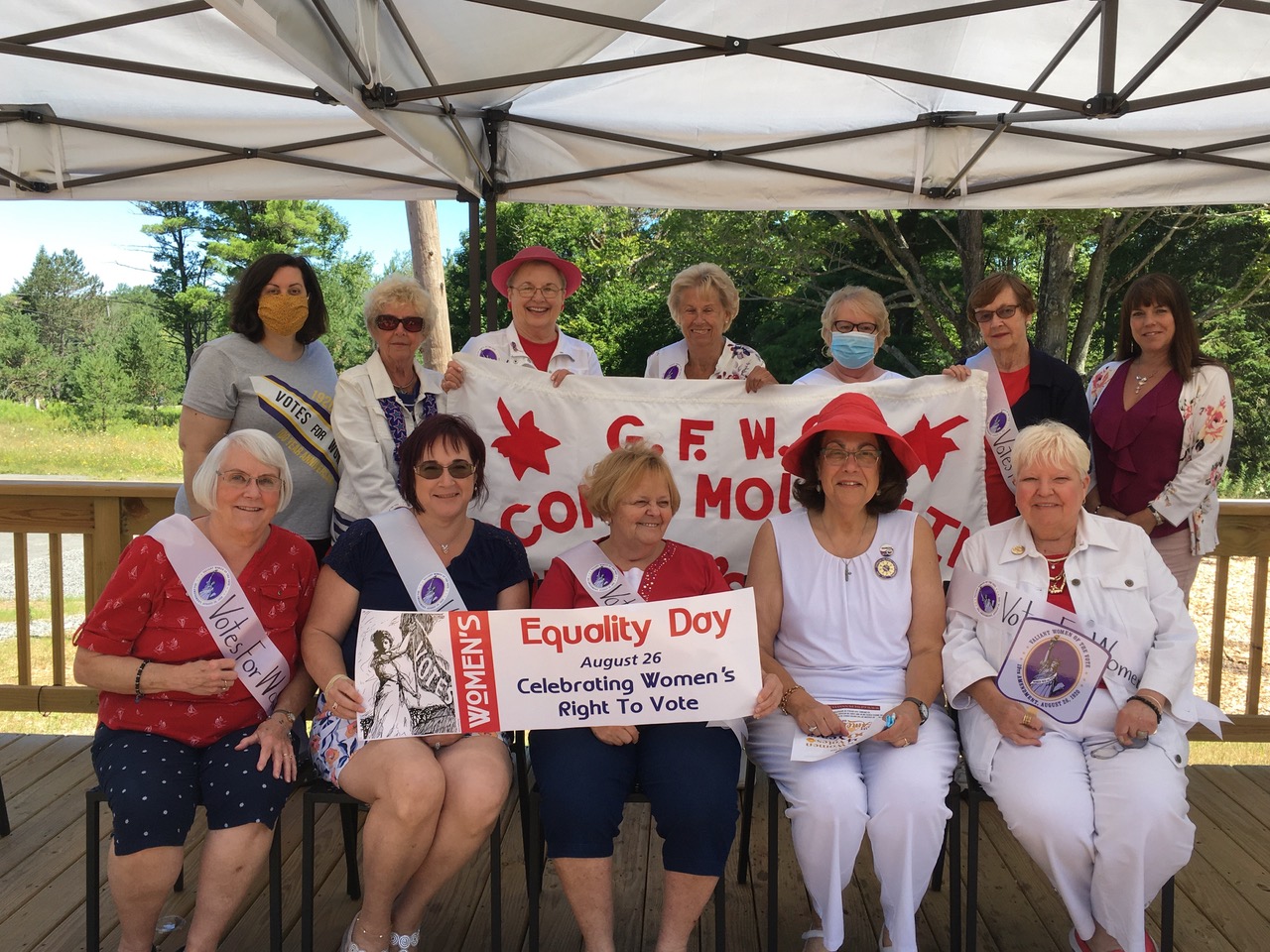 On Thursday August 20th 2020 some of the members from the GFWC Pocono Mountain Women’s Club (Pennsylvania) met for a socially distance lunch at a local restaurant in Poconos Pennsylvania. Members enjoyed good food, conversation,and friendship while listening to Club President Diane Lake talk about the 100th Anniversary of the 19th Amendment and the part that the General Federation of Women’s Clubs had played. Members wore homemade “Votes for Women” sashes and used fans to cool off from the National Women’s History Alliance and dressed in patriotic colors or white for suffrage.

Just in time to celebrate the 100th Anniversary of the 19th Amendment, the GFWC Rhinelander Woman’s Club (WI) reenacted “Failure is Impossible” written by Rosemary H. Knower. Watch the video on YouTube.