With so much in the news about human trafficking, the Parsippany Woman’s Club (New Jersey) decided to help with the S.O.A.P. (Save Our Adolescents from Prostitution) Project, a hands-on outreach to fight sex trafficking at large events and in communities. After purchasing a case of 1,000 bars of soap, members of the club got together and put “hotline” labels on each bar of soap. The soap was then given to a representative from a local group that collaborates with the New Jersey Coalition Against Human Trafficking (NJCAHT) for distribution to area hotels. 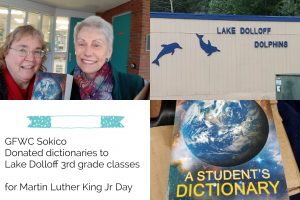 The GFWC Woman’s Club of the Denville-Rockaway (New Jersey) women volunteered for the fifth year in a row at the Habitat for Humanity Restore. They cleaned shelves, restocked, and replaced items on the floor. 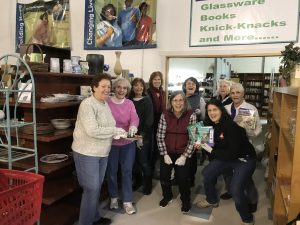 GFWC Georgia posted 21 service project ideas leading up to MLK Day on their Facebook and YouTube channels. In addition to clubs doing their own individual projects, GFWC Georgia did two state-wide projects! The first was working in the State President’s Garden at the Tallulah Falls School, and the other was “packing the pantry” at local Ronald McDonald Houses throughout the state. You can watch their video here!

GFWC Ohio Director of Junior Clubs Esther Gartland joined GFWC Ohio Junior Cyberlinks (Ohio) club president Pam Vines and members to bag over 200 donated hand and feet warmers, socks, hats, gloves, and scarves for the Giving Tree located at the Niles Fire Department. The members also put a care package of food staples, bath items, along with socks, pants, and scarves for a World War 2 veteran. The third project members did was make valentines to be distributed with a treat at the local VA. What a heart warming day of projects on a cold MLK Day! 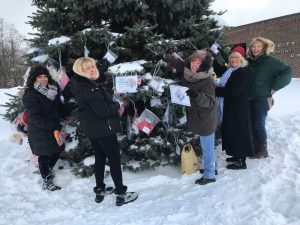 The GFWC Viera Woman’s Club (Florida) chose three projects! They picked up trash on Murrell Road, made Blankets to be used for Operation Smile, and cooked dinner for The Haven, a shelter for children. 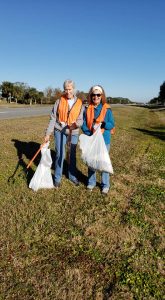 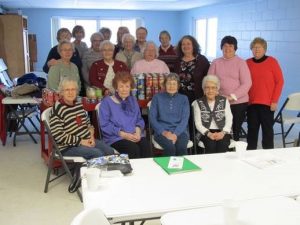 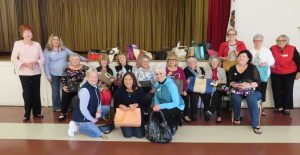 The GFWC Plant City Woman’s Club (Florida) hosted a day of recognition of Dr. Martin Luther King, Jr. called “His Dream, Our Destiny.” Six elementary and middle school students presented essays they had written about King and how his tireless crusade for civil rights has impacted their own lives decades later. Jeanette Richardson detailed the history of the Negro National Anthem, which was sung by the attendees. Mr. Keith Worth recited King’s iconic “I Have a Dream” speech in its entirety from memory. It was a moving and happy celebration with a great attendance. The students were treated to Certificates and a Goody Bag for their efforts. 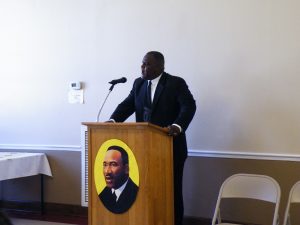 The GFWC Saxonburg District Woman’s Club (Pennsylvania) made and hand-delivered 18 aprons to “Austin’s Place” for their clients. These clients are physically and mentally challenged individuals who spend the day at Austin’s Place. The aprons will be used for craft time and whenever needed. 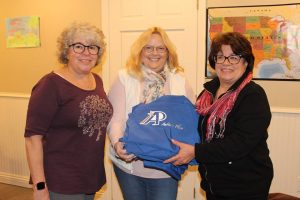 The GFWC Grundy Woman’s Club (Virginia) spent the day reading to students in Head Start Programs. Six clubwomen read Martin’s Big Words: The Life of Martin Luther King, Jr. by Doreen Rappaport to seven classes throughout their home county in Southwestern Virginia. The public library, which partnered with the women’s club for this project, donated the books to each Head Start class in return for the club’s volunteer service. In the first photo, clubwomen Sandy Stiltner and Bertha Street present the book donations to Head Start educators. In the second photo, clubwoman JoBeth Wampler reads to Head Start students in Council, Virginia. 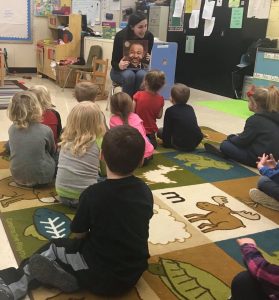 The GFWC Thompson Falls Woman’s Club (Montana) assembled 200 “Vial of Life” kits on Friday and then distributed them at the grocery store, pharmacy, and ambulance hall. Each kit contains three items: first a form to complete with your medical conditions, medications, allergies, emergency contacts, etc. Second, a baggie with a Vial of Life label on the front to go on the fridge, or (as originally designed a few decades ago) in a repurposed pill bottle with the Vial of Life label to place in the fridge.  To complete the kit, a decal for the front door informing first responders to check the fridge. Almost all the kits were distributed, and most club members did not get one! Two hundred more decals have been ordered and there are plans for a second distribution in February. In a town of under 1200 residents, this means nearly every home will have a kit! 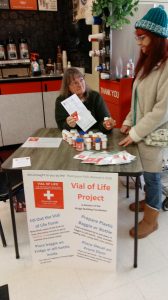 The San Gabriel Woman’s Club (Texas) had four members volunteer to help with the Martin Luther King Jr. Day Project in Georgetown. Approximately 80 teens came to participate in several projects to benefit the community, using their day off from classes to make a difference! All of the organizations that participated are after school places for students to get help and stay out of trouble. The Georgetown Project is a community-based nonprofit organization that builds and sustains a healthier culture and capacity for all children, youth, and families in the Georgetown area. Their craft was making giant felt parts for Mr. Potato Head to be used with young children to create nurturing early environments important to their social, emotional, and cognitive development.  Another craft was making Valentine cards to be distributed to the elderly in their Meals on Wheels package.

The NEST (Nurturing, Empowering, Supporting for Tomorrow)— associated with the Georgetown Project— is a safe haven after the bell rings that offers basic needs, counseling, academic and enrichment support for high school students who are homeless, at-risk, or living in transition. They made “welcome bags” for new students who come to The NEST.  The bags were decorated with kind words and stuffed with hand-made stress balls, welcome notes, and personal care items.

The Upward Bound (UB) program is designed for high school students who have the potential to succeed in college and could benefit from: tutoring, academic enrichment, precollege skills development, career counseling, college visits, cultural enrichments and year-round academic and social support. UB provides opportunities for its scholars to succeed in high school and ultimately in college. Their craft was “Snowman Soup” – a cup with hot cocoa mix, marshmallows, and a candy cane. These will be donated to The Williamson County Child Advocacy Center.

The fourth project they helped with was the Georgetown Y. The craft was to weave bracelets which will go the “Gold Star Kids” – those children who have lost a military parent. 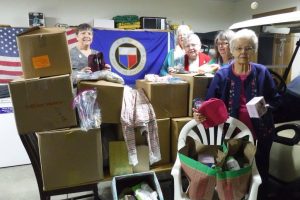 We want to again thank all the clubs who did such tremendous work in honor of Martin Luther King, Jr. Day of Service. We can’t wait to see what you bring to the table next year!